Facebook has blocked access in Thailand to a million-member group discussing the monarchy, after the Thai government threatened legal action.

The firm told the BBC it was preparing its own legal action to respond to the pressure from Bangkok.

Thailand is seeing a wave of anti-government protests which have included unprecedented calls for reforms to the monarchy.

Criticism of the monarchy is illegal in Thailand.

Access from within Thailand to the “Royalist Marketplace” group was blocked on Monday evening. The page can still be accessed from outside the country.

The group has more than one million members, “pointing to its massive popularity,” group admin Pavin Chachavalpongpun told the BBC.

Mr Chachavalpongpun said the group “provides a platform for serious discussion on the monarchy and it allows Thais to express their views freely about the monarchy, from the political intervention of the monarchy, to its intimate ties with the military in consolidating the king’s power”.

The self-exiled academic is based in Japan. A new Facebook group he set up on Monday evening gained more than 400,000 followers over night. 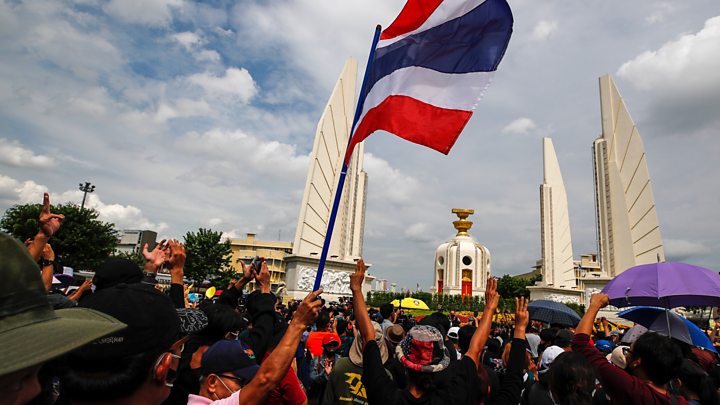 “Requests like this are severe, contravene international human rights law, and have a chilling effect on people’s ability to express themselves,” it said in a statement.

It said it was preparing a legal challenge.

Thailand forcing Facebook to restrict access to the group has also been strongly criticised by rights groups.

“Thailand’s government is again abusing its overbroad and rights-abusing laws to force Facebook to restrict content that is protected by the human right to free speech,” John Sifton, Asia Advocacy Director at Human Rights Watch, said in a statement.

“Make no mistake, it is Thailand that is breaking the law here – international law protecting freedom of expression.”

Mr Chachavalpongpun told the BBC the discussions in the group were “critical of the monarchy”.

“Some members think a constitutional monarchy may still work, but this is the minority. Some think an urgent monarchical reform is needed.”

He is one of three dissidents the Thai government has warned its people to stay away from.

The other two are British journalist Andrew MacGregor Marshall who has published a book critical of the Thai monarchy and Thai political history professor Somsak Jeamteerasakul who is an outspoken critic of the monarchy and lives in exile in France.

Thailand’s monarchy has long been shielded from criticism under strict lese-majeste and other laws which punish insult to the royal family with up to 15 years in jail.

Thais are taught to revere the monarchy from a young age.

But that taboo was broken in recent weeks when some activists started publicly calling for reforms to the monarchy – amid wider anti-government protests.

“I think they have pushed the ceiling of the discussion on the monarchy very high and they will continue to do so,” Mr Chachavalpongpun told the BBC.

“The government tried to shut them up by using legal tools such as arresting the core leaders and blocking access to my group. If the students persist, a harsher measure might be taken, like a crackdown.”