The EU’s new trade commissioner has extensive experience of being enlisted to sort out messy situations.

A former Latvian prime minister who steered his country through an international bailout, Valdis Dombrovskis was confirmed last week as the EU’s replacement trade chief, after his predecessor Phil Hogan’s shock resignation in August.

In an interview with the FT, Mr Dombrovskis set out priorities including revitalising trade relations with the US via a settlement in the Airbus-Boeing dispute. He also plans to create new means of defending European companies from unfair competition and to ramp up talks on an investment treaty with China.

It is the second time that the Latvian has been drafted to take over a commission portfolio mid-mandate.

The first came in 2016, when Jonathan Hill, Britain’s EU commissioner, resigned in the wake of the Brexit referendum, and Mr Dombrovskis was tapped by then-commission president Jean-Claude Juncker to assume responsibility for Lord Hill’s financial regulation beat.

Latvia’s commissioner since 2014, Mr Dombrovskis is one of the longest-standing members of the EU executive branch and a crisis veteran. He took over as his country’s prime minister during a financial meltdown when bigger political beasts preferred to stick to the sidelines. Known for his plain speaking and love of policy detail, he began his premiership in 2009 by telling his compatriots: “We are facing national bankruptcy. It’s going to be tough.”

Now he takes over the EU’s top trade job during a crisis of confidence for the global-trading system. Reliance on lengthy supply chains has been undermined by Covid-19 and the World Trade Organization has faced a sustained battering from Donald Trump’s trade wars and Chinese state-backed capitalism. US blocking tactics mean that the WTO currently does not even have a fully functioning dispute-settlement system.

Both Mr Hogan and Mr Dombrovskis have been bastions of support for economic liberalism within the commission — acting as a bulwark against more protectionist tendencies.

But the Latvian is assuming responsibility for trade at a time when internal economic sovereignty rather than international economic outreach is the political creed of the moment. In the interview, Mr Dombrovskis insisted that the EU’s post-Covid mantra of “open strategic autonomy” was compatible with breaking down barriers to trade.

“The EU remains open for free and fair trade,” Mr Dombrovskis said. “But, at the same time, in a more conflictual international trading environment, we are going to be more assertive in defending our own rights, in defending European companies, in levelling the playing field.”

Striking that balance will be far from easy. The policy means, for example, that while repairing relations with Washington is a priority, Brussels is also preparing a new “anti-coercion tool” that would go beyond existing trade-defence instruments. The idea would be to hit back hard in case the US, or another country, applies punitive tariffs to EU products outside of WTO procedures.

The political push in Brussels for a more powerful retaliatory weapon can be dated to Mr Trump’s threats against the EU car sector. But it would take the EU into unprecedented legal territory. In effect, it’s a recognition that the creaking WTO system is no longer enough to protect the bloc’s interests.

“We need to be able to react to situations where third countries are acting outside of the WTO framework,” Mr Dombrovskis said.

On negotiations with China, Mr Dombrovskis said his priority would be “substance over deadline”, insisting that Beijing needs to give more ground before negotiations can be concluded on an investment treaty.

A multilateral system to repair, bilateral relations to rebalance and European companies to reassure. It’s going to be a busy four years. 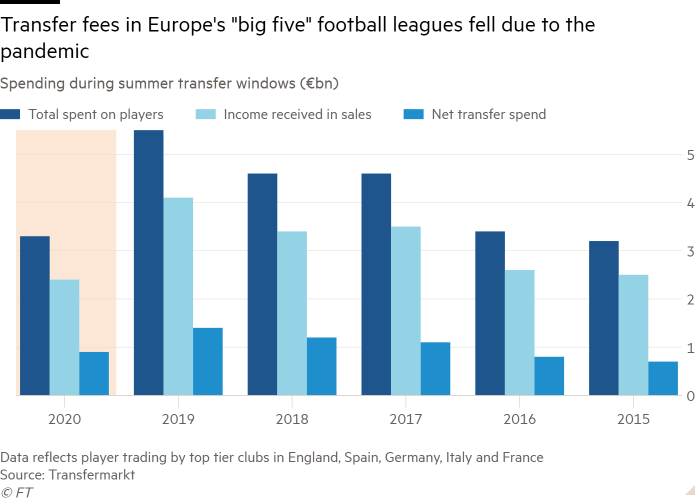 Things are getting ugly for the beautiful game as the pandemic hits home. The continent’s football clubs face a revenue shortfall of €3.6bn over the next two years due to the pandemic, according to the European Club Association. Clubs in Europe’s top five leagues in England, Spain, Italy, Germany and France spent a combined €3.3bn in this summer’s transfer window, according to Transfermarkt, a football data site. This is around €2bn less than was spent in the equivalent period last year. (chart via FT)

Foreign affairs ministers meet on Monday, followed by the General Affairs Council on Tuesday. Trilateral negotiations continue as the European Council and parliament attempt to land a deal on the details of the EU’s upcoming seven-year budget.

On Thursday and Friday, EU leaders hold a summit at which Brexit and the negotiations with the UK are set to feature heavily. The World Bank and IMF annual meetings are under way throughout the week.