The European Commission will on Tuesday try to estimate just how difficult it will be to wake Europe’s economy from the forced hibernation caused by Covid-19.

At 10.00 (CET), Brussels will publish its updated EU gross domestic product projections for 2020 and 2021 with accompanying country-by-country breakdowns. It is the first forecast since mid-April and the first since European governments began to gradually lift lockdown measures over the past few weeks.

The estimates will be closely watched and compared with those produced in spring when Brussels estimated that EU GDP would contract 7.5 per cent this year and bounce back by 6 per cent in 2021.

A series of new variables are likely to play into Tuesday’s forecast. April’s numbers did not take into account the vast array of measures that EU governments have since implemented to fight the pandemic — including multibillion-euro stimulus packages for businesses, labour market furlough scheme, and of course the EU’s own €750bn recovery plan. The previous forecast was also made at a time when there was still uncertainty about how long Europe’s lockdown would continue.

The projections will also hint at what shape the EU’s recovery could take. There is growing optimism that a “V-shaped” rebound — which had been widely dismissed only a month ago — could be on the horizon. Optimism has been fed by a series of sentiment measures, such as Purchasing Manager’s Indices, which have shown sharp rises in confidence among the EU’s manufacturers and service providers in June.

But PMIs should be taken with a pinch of salt, especially when businesses are being asked to compare recent weeks with the unprecedented shutdowns they have experienced for the last few months (more here from the FT’s Claire Jones).

Economists are also wary of gaps between “soft” indicators such as confidence surveys from households and companies, and “hard” data, such as unemployment figures or industrial production levels. These more accurate measures take longer to compile and have not yet caught up with the post-lockdown economy.

That’s all to say that the commission’s economists face a tricky task in accurately projecting the precise nature of the recovery at this stage in the pandemic. Tuesday’s estimate is likely still to be based on recent survey data, suggesting that projections for 2021 could be better than those estimated in April.

And while forecasting is never a precise science, in the EU it can also be an unduly political exercise. Should GDP numbers for the worst-hit economies — such as Spain and Italy — be better than expected, it will no doubt play a role in the already fractious negotiations over the EU’s post-Covid recovery fund. Hard-nosed “frugal four” capitals could point to a predicted robust recovery as reasons to spend less on the EU’s stimulus efforts. 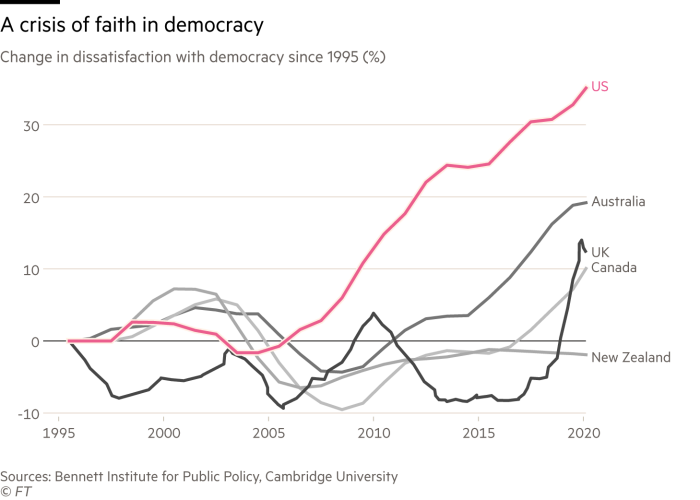 Martin Wolf’s latest FT Big Read channels Aristotle and argues that the post-pandemic social contract must be centred on a revived notion of citizenship — or else our democracies risk descent into plutocracy. 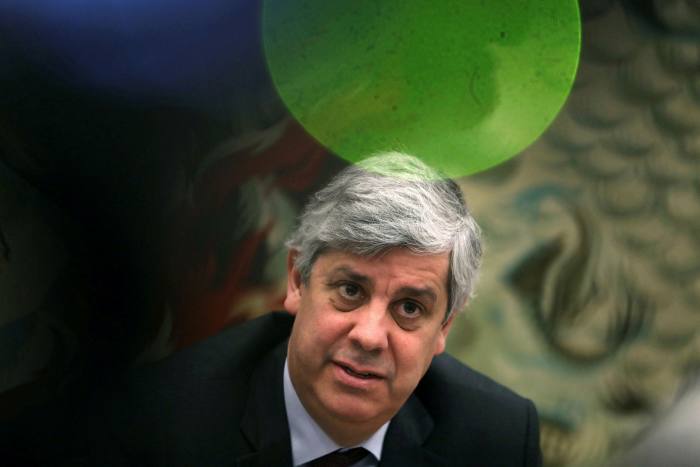 Mário Centeno has presided over the eurogroup since 2018 © REUTERS

Rewrite the rule book
Mário Centeno, the outgoing president of the eurogroup, wants the eurozone to avoid “blindly” applying the bloc’s budgetary rules after Covid-19, fearing that they could spark a fresh recession.

Mr Centeno tells the Financial Times that Brussels should make a serious proposal to revamp the Stability and Growth Pact and revise limits on public debt to come up with “realistic” targets. The rules have been put into abeyance during the pandemic and calls for reform are likely to provoke a clash with northern capitals who want them reinstated after the immediate crisis phase is over:

“This crisis will result in large increases of public and private debt. It will require a strong investment push,” said Mr Centeno, who was nominated in June by Portugal’s government as the next governor of the country’s central bank. “This is true for all countries. Applying the rules blindly could prove unrealistic under such circumstances, hurting the credibility of the framework.”

Allocation, allocation, allocation
The European Commission’s proposed allocation key for distributing its recovery money is still hugely contentious among EU governments. To help them out, scholars at think-tank Bruegel have devised a new allocation key which is based not on Covid-19’s economic impact but on the precise economic structures of Europe’s regions. They argue the method can capture “the spillover effects of the pandemic, which are also spreading to regions only marginally hit by the virus”. The allocation key is a subject EU budget commissioner Johannes Hahn will probably be grilled on at the latest FT-Bruegel livestream event on Tuesday. You can join in from 14.00 (CET) and send in your questions for the commissioner via Slid.do using #eu2020

Turkish warning
Turkey will retaliate if the EU imposes further sanctions on Ankara, Mevlut Cavusoglu, foreign minister, vowed on Monday after a meeting in the capital with EU foreign policy chief Josep Borrell. Mr Cavusoglu said his country would be forced to “respond” if the European bloc follows through on the possibility raised by France of further punitive measures to add to those already enforced over Turkey’s drilling for gas in waters off Cyprus. 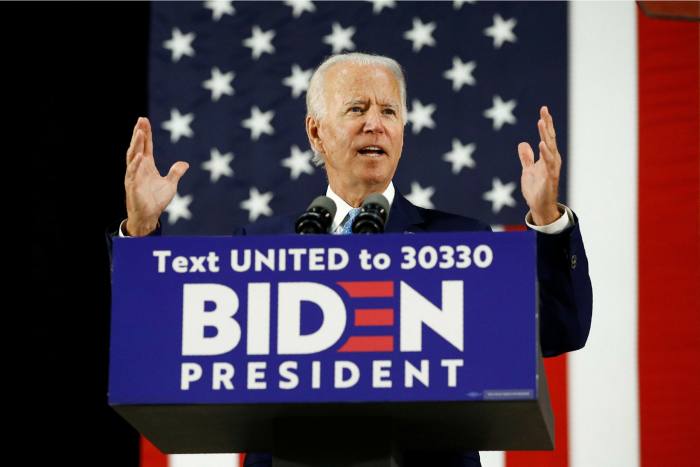 Is a Joe Biden presidency better for EU-US relations? © AP

Banking on Biden
Alexander Soros thinks a Joe Biden presidency has the potential to reverse years of damage in EU-US relations under Donald Trump. He says the Democratic leader can revolutionise US foreign policy, give European telecoms industries a boost in the US and help wean the continent off Russian gas (Project Syndicate):

“A Biden administration would uphold its end of any bargain, and would be trusted to maintain America’s commitments to partners and allies around the world. The only question is whether Europe, too, would be prepared to make the tough choices needed to reinvigorate the alliance.”

Sorry seems to be the hardest world
The European Commission’s chief spokesperson has refused to apologise for Ursula von der Leyen’s appearance in a campaign video for Croatia’s ruling rightwing — and increasingly nationalist — HDZ party. The commission has said it erred in using a backdrop of the EU institution’s headquarters in the clip, which Ms von der Leyen insists was intended to be made in a personal capacity. Brussels also blames “the post-production phase” in Zagreb, when her job title was added. But her spokesperson said von der Leyen believed it was good for commissioners to “engage in active political life”. Sam Morgan at Euractiv wonders why the president doesn’t have better things to do with her time than get involved in Croatian domestic affairs. 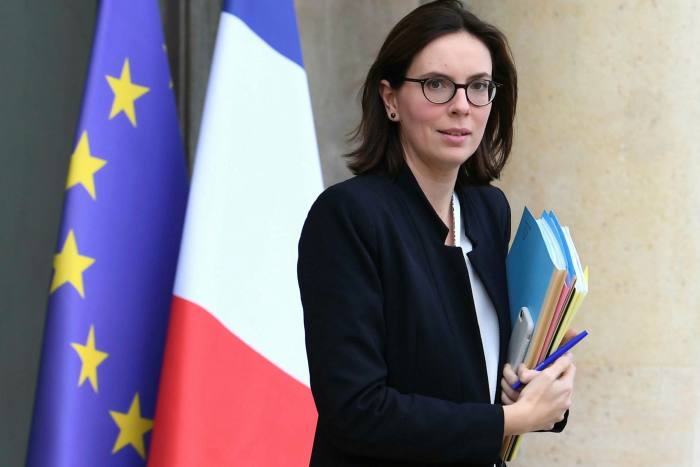 Bank to the future
Luxembourg’s Pierre Gramegna, an advocate of close ties between the City of London and the EU, says Britain’s hardline negotiating position risks undermining the new arrangements for market access.

Local lockdown
Authorities in Spain are seeking to reassure people about the spread of Covid-19 after restrictions on mobility were put in place in Segrià in Catalonia, in the north-east, and in A Mariña county in the north-western region of Galicia following outbreaks in both areas.