When swaths of Europe were forced into coronavirus lockdowns four months ago, it became almost impossible for aspiring home buyers to do house viewings or arrange a mortgage — freezing most activity in the region’s housing markets.

But there are indications that the sharp downturn may already be coming to an end.

Eurozone mortgage lending rebounded in May after sharp falls in March and April. And although eurozone banks reported a sharp decline in demand for mortgages in the second quarter, according to the latest survey by the European Central Bank, most banks predict mortgage demand will recover in the third quarter.

The consultancy Oxford Economics estimates that house prices fell on a quarterly basis in all major European economies in the three months to June — and countries that report monthly house price data, including Portugal and Germany, have documented rapidly slowing growth.

But estate agents and central bankers say property transaction volumes have begun to bounce back.

Anatoli Annenkov, economist at Société Générale, said: “I think much of the slowdown in the second quarter was just temporary, reflecting the problems of actually concluding deals.”

This suggests the housing market has so far escaped the worst impact of the pandemic — unlike the 2008 financial crash or the subsequent eurozone debt crisis, when it was the root cause of many problems.

“Even though the nature of this crisis is completely different to the 2008 one . . . of course housing transactions and the demand for mortgages declined a lot when the coronavirus hit — especially during the confinement, when people could not see homes or get a mortgage,” said Pablo Hernández de Cos, governor of the Spanish central bank.

So far, Spain has been one of the hardest hit housing markets. In May the value of second-hand residential housing sales fell to less than half the level of a year before, according to the national notary board.

All in all, household sectors came into this crisis better prepared and with unprecedented support from the governments

Fitch, the rating agency, forecasts that Spanish house prices will fall 8-12 per cent this year — compared to a rise of 0-4 per cent in Germany.

“But we are already seeing a pick-up in (economic) activity in Spain which should also extend gradually to the real estate market,” Mr Hernández de Cos said.

Sophie Chick, head of world research at estate agents Savills, said: “The (European) housing market ground to a halt because of the lockdowns, but now we are seeing more activity than expected and some pent-up demand.”

Efforts by European governments and central banks to mitigate the economic effects of the pandemic are helping to cushion the housing market, some economists say.

Ultra-low interest rates and massive levels of government support via furlough schemes and loan guarantees could help to avoid a repeat of the surge in bankruptcies and job losses which the continent experienced during the last crisis. And household debt levels are lower in many countries than they were in the run-up to the financial crisis. 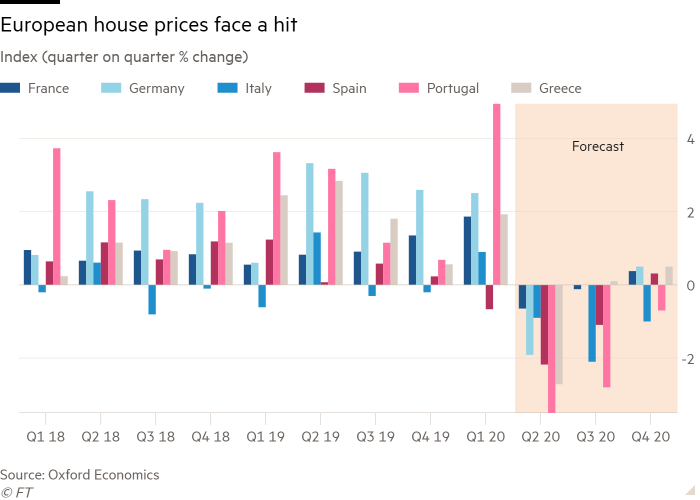 And housing markets such as Spain, which bore the brunt of the 2008 crisis, are better placed to weather the fallout from the pandemic.

While prices in Spain have rebounded since 2014, overall they are still a quarter below pre-2008 values. Spanish banks lend mortgages for up to 80 per cent of a property’s value — as opposed to more than 100 per cent before the last crash — and they scrutinise the finances of applicants who work in vulnerable sectors, like tourism, more closely. 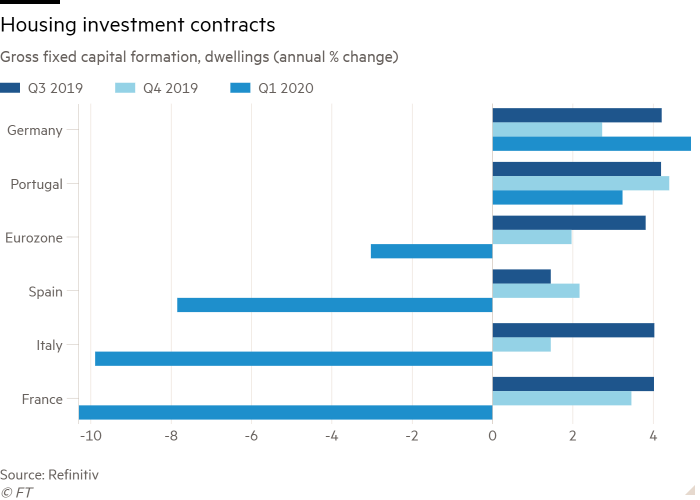 “Developers with projects today will finish them,” said Samuel Población, national director of land and residential product at CBRE España. “We won’t see the ugly half-finished skeletons we saw all over Spain last time around.”

Ana García Vizcaíno, team leader at the Keller Williams One estate agency in Madrid, said the experience of lockdown had shifted demand away from city centre apartments. Houses with outdoor space in the suburbs have become more popular.

“People are saying: ‘I’m going to sell because I’m going to change my life. I won’t spend another confinement without a terrace’,” Ms García said.

Some experts believe the true impact of the pandemic on Europe’s housing markets will only become clear later this year. 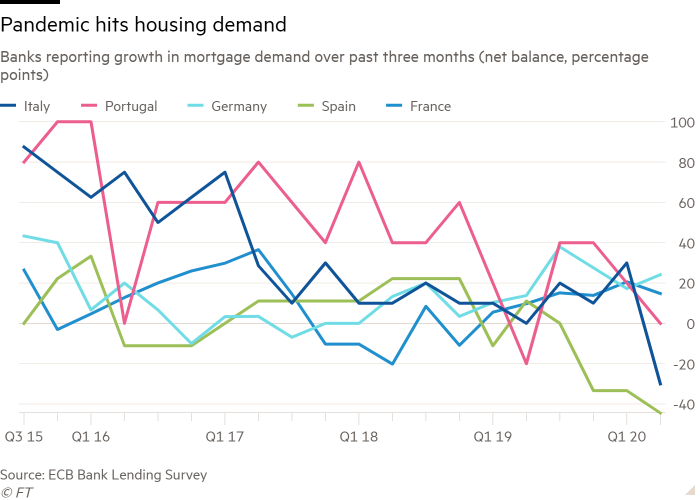 “All in all, household sectors came into this crisis better prepared and with unprecedented support from the governments,” said Tamara Basic Vasiljev, economist at Oxford Economics. However depressed activity levels “might spell more trouble next year, especially for markets where valuations are already stretched”, she warned.

Mikel Echavarren, head of Spain at Colliers International, the property consultants, said the autumn selling season would be crucial. “Once the summer ends and people return to work, if the pandemic returns and the economy shows terrible numbers . . . it will be a reality check,” he said.

For her part, Ms García is trying to finish as many house sales as she can before a potential second wave of coronavirus or a surge in unemployment sends the market into a slump.

“That’s why I’m working so hard in the summer, to close as many deals as possible now,” she said. “I hope I’m wrong.”