Highest one-day jump in US infections since summer outbreak

Countries across Europe are reimposing painful restrictions on public life as a surge in coronavirus infections heightens fears the pandemic is tightening its grip, bringing another public health emergency closer just as winter approaches.

Sweden remains an exception by not imposing strict curbs, which analysts attribute in part to its longstanding neutrality and belief that it is a “moral superpower” that seeks to act rationally, whereas it perceives the behaviour of other countries to be based on political calculations or emotions.

Lancashire on Friday agreed arrangements with the UK government under which the county in north-west England will introduce onerous social and economic restrictions, doubling the number of people in England living under the tightest rules to 3.1m.

Liverpool, which entered so-called tier 3 restrictions on Wednesday, struggles to operate safely in a public health emergency because of inequality mixed with people’s resignation at diktats from London, seen as far removed from the city.

But Boris Johnson, the prime minister, remains in a stand-off with Greater Manchester, which is refusing to introduce tier 3 restrictions unless the government provides increased wage subsidies for workers at businesses forced to shut.

Such political tensions, reflecting trade-offs with the economy, are also being played out in the US. Several of the most fiercely contested states in the presidential election suffered sharp increases in cases this week, pushing the number of infections nationwide to their highest one-day jump since a summer outbreak.

Wisconsin, Ohio and North Carolina — which Donald Trump won four years ago but where statewide polling shows Democratic challenger Joe Biden either even or leading — recorded record jumps in cases, according to local health departments. Arizona and Florida, which are also viewed as “swing states” that Mr Biden could win after they voted for Mr Trump in 2016, had big jumps in infections.

Beijing sold dollar debt directly to US buyers for the first time, with a $6bn offering drawing record demand on the back of China’s economic recovery from the pandemic. The bonds sold by China’s finance ministry on Thursday drew orders worth more than $27bn, or roughly $10bn more than an offering of the same size last year, according to bankers on the deal.

Global stock markets snapped a three-session losing streak, lifted by upbeat earnings results that helped offset concerns over a surge in coronavirus cases in Europe and the US. Wall Street’s S&P 500 benchmark opened 0.4 per cent higher and the tech-heavy Nasdaq Composite rose 0.5 per cent.

A need to be financially resilient, plus more spare time and increased boredom in the absence of alternative distractions such as sport as a result of the pandemic has helped drive a growing number of small and new investors into the market. But Merryn Somerset Webb warns “it is worth remembering that there is never anything safe about stock markets in the short term”.

UK pub chain JD Wetherspoon has slumped to a loss for the first time in 36 years and has condemned new trading restrictions brought in to try to cut coronavirus infection rates. The 872-strong pub company reported a £34m loss in the year ending in July on revenues almost a third lower at £1.2bn. Tim Martin, the group’s chairman, said the three-month lockdown had “gone on longer than necessary”. 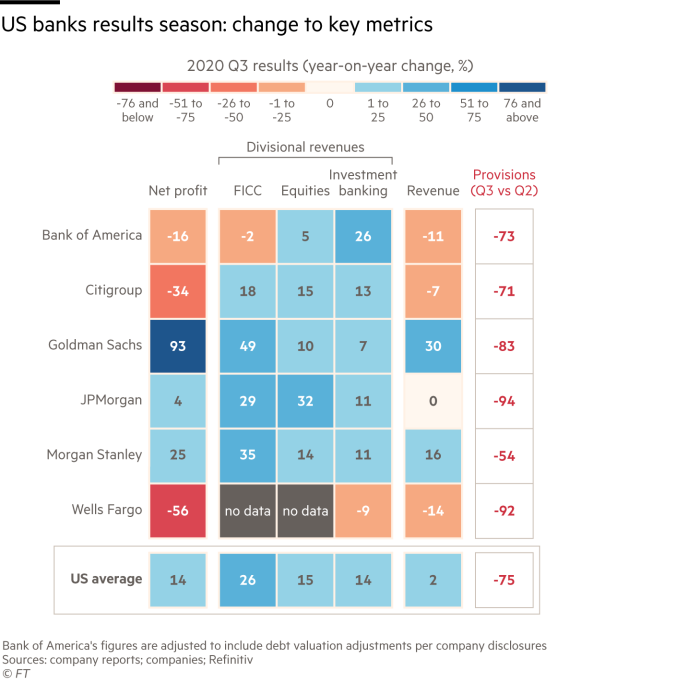 Morgan Stanley closed out Wall Street’s earnings season on a high, with booming markets driving a 25 per cent increase in third-quarter earnings and fuelling the bank’s calls to be allowed to resume share buybacks. The bank posted net income of $2.7bn for the quarter, far better than the $2bn forecast by analysts polled by Refinitiv.

US retail sales grew in September at their fastest pace in three months even as concerns linger over the economic recovery amid uncertainty about additional stimulus measures. Retail sales rose 1.9 per cent last month, driven by strong spending on vehicles, clothing and sporting goods, the commerce department said on Friday. Covid-19 is calling last orders on British pubs, with estimates that up to a quarter of the UK’s 39,700 pubs, which collectively generate annual sales of £23bn, may not survive. “I can’t see the light at the end of the tunnel until Easter and I’m scared for this pub that I love,” said Sonia Couperthwaite, one of four remaining employees of Ye Olde Man and Scythe in Bolton, which has survived fires, floods, wars and a local massacre since it started trading in 1251.

China’s National Bureau of Statistics will reveal if the country’s economic rebound from the pandemic remains on track when it releases its estimate for third-quarter gross domestic product growth on Monday. The IMF revised upwards its full-year projection for Chinese growth to 1.9 per cent this week.

Professor Arvind Subramanian, of India’s Ashoka University, argues that developing economies must not succumb to export pessimism: reports of globalisation’s demise have been greatly exaggerated. Covid-19 could accelerate the growth of services exports — and even if global manufacturing exports stagnate, those of most developing countries can still grow rapidly, as long as they gain market share, he says.

Gilead’s Covid-19 treatment remdesivir has no substantial effect on a patient’s chances of survival, a clinical trial by the World Health Organization has found, delivering a significant blow to hopes of identifying existing medicines to treat the disease. “Remdesivir, hydroxychloroquine, lopinavir and interferon regimens appeared to have little effect on in-hospital mortality,” the study found.

“Long Covid” has left many patients with debilitating, varied symptoms months after the initial infection has cleared, raising fears about the long-term health costs of the pandemic. Patients infected in the first wave of the virus have continued to suffer disorders in the brain, lungs, heart, gut, liver, skin and other parts of the body, according to a review of the disease conducted by the UK National Institute for Health Research.

The first confirmed case of Covid-19 reinfection in the US has added to doubts about “herd immunity” from the virus and worried experts because the patient became more seriously ill following the second infection. Other cases have been recorded in Hong Kong, Belgium, the Netherlands and Ecuador, but this is only the second time a patient has shown more serious symptoms when the virus returned. 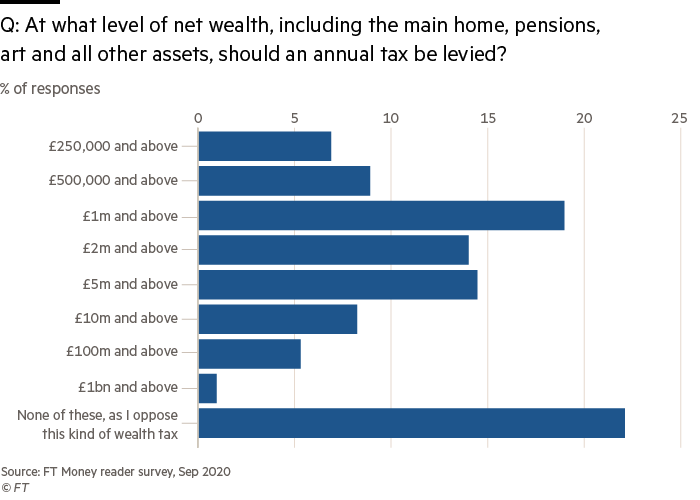 In response to the article Wealth tax: FT Money readers are divided, which explored one radical idea to help pay towards the costs of coronavirus, reader Dr Hot writes:

Lunch with Atul Gawande: the literary surgeon famous for changing the way people think about the end of life believes the questions facing Americans during coronavirus are moral, rather than technical. He calls for “Medicare for all”, sick pay to allow the ill to stay away from work and doctors to listen to what patients want. “The dying have to have access to a family member. Just out of sheer humanity.” 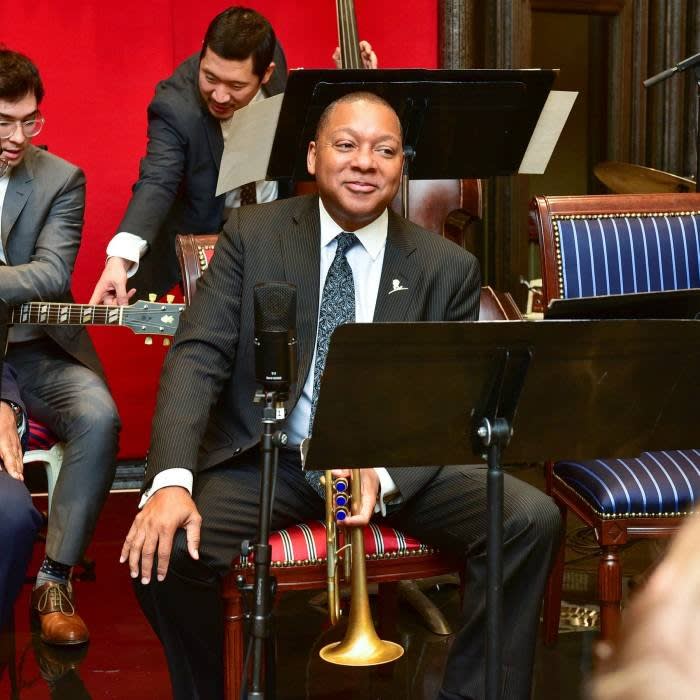 Wynton Marsalis, the jazz maestro noted for the sharpness of his appearance as well as his playing, has long scrambled around the borders of the personal, the cultural and the political. “The fact that I had an afro and played classical music concertos was an issue,” he recalled. His autumn tour is titled “The Sound of Democracy” and his playful new album, The Ever Fonky Lowdown, is a swipe at material and spiritual corruption and populism.