Hello from Brussels. The town has now definitely emptied out and there’s not much on the agenda until September, except of course the Brexit talks, which will have a negotiating round in the middle of the month. Expectations are not high that there will be a breakthrough then, certainly not anything that will involve the EU task force going back and consulting with the member states. The general consensus is that September/October will be the months for a deal, if there is one.

Today’s main piece sweeps up after an EU-China meeting this week that unfortunately underlines that Brussels’s attempts to forge a productive relationship with Beijing are not creating much of substance. Tall Tales examines the somewhat optimistic assessment of the growth in trade that the African Continental Free Trade Area will bring. Our chart of the day looks at the slump in chocolate demand.

The sound of braking China

There was an EU-China high-level dialogue this week. Did you notice? No collective public pronouncements afterwards, no clear sense of progress. A similar thing happened at the grander EU-China summit last month, which took place at presidential/prime-ministerial level, after which there was no agreed statement and no joint press conference.

If one end of a high-level dialogue happens in a deserted Brussels and no one says anything afterwards, does it make a sound? Did it even happen? These are existential questions beyond our mere technicians’ brains here at Trade Secrets. We only note that, with Beijing putting the brakes on progress, the EU’s strategy of trying to maintain functional if not cordial relations with China doesn’t look hugely productive.

For the past few years, the EU has prided itself on having closer and more constructive relations with China than does the US — though short of graffitiing a vast and unflattering caricature of President Xi Jinping on the side of the Berlaymont building in Brussels, that’s hardly difficult. But it’s hard to see that it’s achieved much as a consequence.

Yes, the Commission got a deal on geographical indications for food, though frankly it’s not as if China was turning out hundreds of tonnes of ersatz Roquefort in any case. And yes, China joined the EU’s workaround to the WTO Appellate Body after the Americans put the latter into the deep freeze.

But beyond that? The bilateral investment treaty the two have been working on since 2013, which would give European companies access to the Chinese market as well as protecting existing investments, is going nowhere. It will almost certainly not hit its end-2020 target — and according to the EU, Chinese intransigence rather than Covid-19 is the main culprit. It’s more likely that Brussels pulls the plug on negotiations in the new year than that they successfully conclude around then.

Meanwhile, the Commission is sharpening its tools to use against what it considers to be unfairly subsidised imports, investment and procurement bids, as well as quietly nudging the member states in the direction of easing Huawei out of their 5G networks.

Hitherto, suspicion of China in some western European countries, France in particular, has been tempered by Germany — all those machine tools to sell — and countries in central, eastern and increasingly southern Europe. The CEE, which put together the “16+1” forum (later expanded to 17+1 with Greece) for regular discussions with China, are desperate for investment and have eyed Beijing’s Belt and Road Initiative as a way to get it.

Those strategies, however, have disappointed. Corporate Germany has become frustrated by what it perceives as maltreatment of its operations in China, including arbitrary and discriminatory regulation and intellectual property theft. The investment in CEE has substantially failed to materialise. The EU members of 17+1 have become increasingly critical.

Meanwhile, opinion about China more generally is shifting in EU member states, arising from a combination of Beijing’s new security law in Hong Kong and more attention on the grotesque abuses of the Uighur people. The EU is perfectly capable of turning a blind eye to human rights violations, but principled stances become a lot more affordable if there are no profits to be had.

In this context, there is now more resonance to the persistent complaints of those such as Reinhard Bütikofer, a German Green MEP and chair of the European Parliament’s delegation for relations with China. Mr Bütikofer has sharply criticised Volkswagen, which maintains a production plant in Xinjiang — the Uighurs’ province — for failing to speak out about the abuses.

After all, non-European countries have proved themselves perfectly capable of choosing politics over investment and exports. On 5G, for example, countries much more dependent than Europe on Chinese trade and investment, such as South Korea and Japan, have nonetheless taken a much tougher line on Huawei.

As we’ve said before, an EU shift away from alignment with China would be accelerated by a Biden government eager to rebuild alliances with Europe. There’s some bafflement in Brussels that China is giving up the chance of a quick win in the EU by endangering the bilateral investment treaty. They’re choosing economic nationalism over international co-operation. It’s hardly surprising if eventually their trading partners lose interest in trying to make the latter work and turn elsewhere.

The Covid-19 crisis has taken a big bite out of the chocolate market, causing a collapse in demand that has sent cocoa prices sharply lower and created “disastrous” conditions for farmers, write Emiko Terazono and Neil Munshi. Shifts in supply patterns are normally the cause of fluctuations in cocoa prices. But the virus has shifted attention to demand, as lockdowns disrupted sales of chocolate at airports, hotels, restaurants and speciality boutiques. 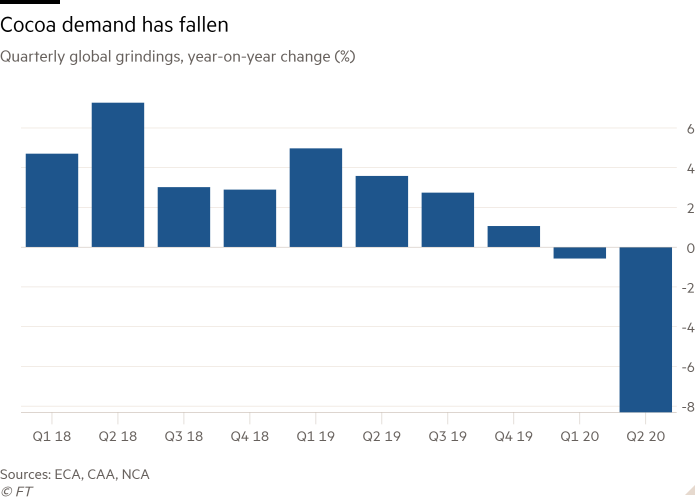 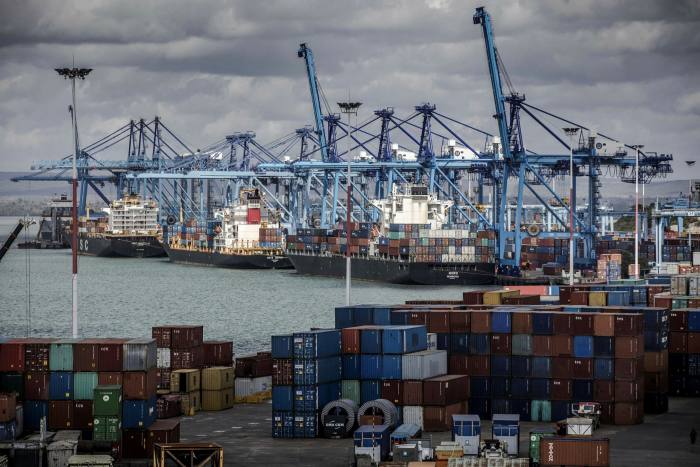 The port of Mombasa, Kenya. The African Continental Free Trade Area is set to come properly into force next year © Luis Tato/Bloomberg

There’s always a temptation to oversell the benefits of trade deals — that they create this many jobs or that many exports. After all, you have to gin up enough domestic political support to get them over the line somehow. The expectations machine has been cranked up again in support of the African Continental Free Trade Area (AfCTFA), which will hopefully go properly into force next year. It’s a good thing in itself: intra-African trade has been rising but is still way below intraregional trade in Europe, North America or south-east Asia.

But still, a widely cited estimate from 2012 (expertly dissected here and brought to our attention by the great Lauren McEvatt of Morpeth Consulting) of a 52% increase in intra-African trade as a result of AfCTFA is eyebrow-raisingly optimistic. It’s predicated on full liberalisation within Africa, a common external tariff and a lot of “trade facilitation” measures (streamlining ports and eliminating paperwork).

Are all those going to be completed any time soon? No. In particular, there is always likely to be plenty of border friction about. The risk with creating unrealistic expectations is that the public view of trade suffers when they are disappointed. Still, the temptation is always there, politicians very often succumb to it, and at least it keeps us debunkers in gainful employment.