Alarms and sirens will sound across Germany on Thursday morning to test its alert systems in the first national warning day — Warntag — in 30 years.

Inside the European Central Bank headquarters in Frankfurt, meanwhile, alarm bells have been ringing for a while about the recent rise of the euro.

For the first time in more than two years, the ECB is expected to include a reference to the exchange rate in the “introductory statement” it publishes to present the results of its monetary policy meetings.

While its comment on the euro is likely to be bland, the wording will be closely scrutinised — especially as this week’s meeting is unlikely to produce big policy changes.

Christine Lagarde is tanned and relaxed after returning from a holiday in her native France. But with the eurozone economy still reeling from a record postwar recession, the ECB president has plenty on her plate. Here are the four big questions to watch for: 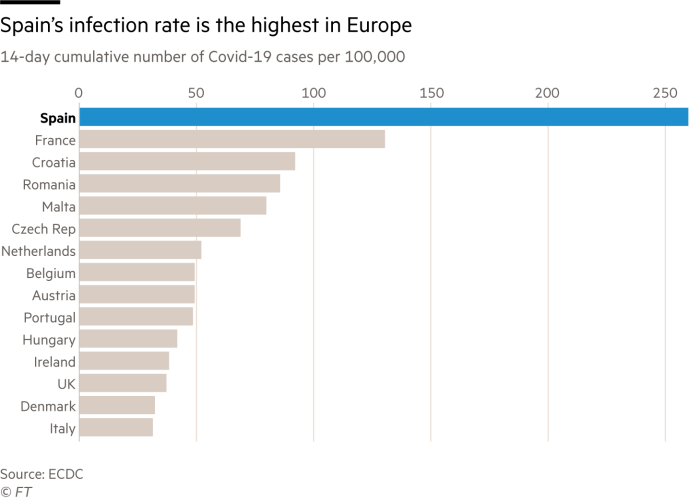 Spain’s rise in Covid-19 stands far and above the rest of Europe, with daily case numbers hitting 10,000 in recent weeks. The FT’s Daniel Dombey reports on why a combination of indoor gatherings, outdoor drinking and governance issues have contributed to the surge. Coming up on Thursday

In Brussels, the European Commission will deliver its assessment on how tech giants are complying with the voluntary “code of practice” on disinformation — including news related to Covid-19.