The EU has been handed the right to hit almost $4bn worth of US goods with punitive tariffs in retaliation for illegal state aid to Boeing, leading Brussels to ramp up calls for a final settlement to the two sides’ 16-year aircraft dispute.

The World Trade Organization announced the decision on Tuesday. The EU will now have to decide when to put the tariffs into practice.

The retaliation rights of $3.99bn are less than the $7.5bn the US received in a parallel case last year against Airbus, and also less than the $8.58bn requested by the EU.

But Brussels has identified a wide range of US products that it could hit, including aircraft, fitness machines and blueberries.

Valdis Dombrovskis, the EU trade commissioner, has said that the long-awaited decision should be the cue for the two sides to come together and agree subsidy rules for the airline sector.

“The EU will immediately re-engage with the US in a positive and constructive manner to decide on next steps. Our strong preference is for a negotiated settlement. Otherwise, we will be forced to defend our interests and respond in a proportionate way,” he said.

The transatlantic dispute over aircraft subsidies is one of the longest-running pieces of litigation in the WTO’s history, and reflects the economic importance and competitive pressure felt by manufacturers on both sides of the Atlantic.

The battle between Boeing and Airbus dates back to 2004, the year after the European aircraft maker overtook its US rival in terms of deliveries for the first time. After brokering an agreement with the EU on state aid in 1992, the US launched a case against subsidies to the European aerospace group dating back to the 1970s, initially claiming that $22bn in illegal funding had been given to Airbus.

The EU followed up a few months later with a challenge of its own, originally claiming $23bn in illegal aid was offered to Boeing.

In 2010 and 2011 the WTO ruled that Boeing and Airbus had collected billions in unlawful assistance, the former through aid to launch aircraft programmes repayable on delivery and the latter via government contracts for defence and space business as well as tax breaks.

Brussels has been urging a settlement for months, as EU policymakers have grown increasingly exasperated by the time lag between the WTO decision last year on Airbus and today’s announcement on Boeing.

An Airbus A350 at Airbus headquarters in Toulouse, France © Regis Duvignau/Reuters

In that time, the US has applied punitive tariffs to products ranging from French wine to Italian cheese and German machine tools, while the EU has not been unable to unleash similar measures in return.

In an interview with the Financial Times last week, Mr Dombrovskis urged the US to withdraw its tariffs as a confidence-building measure for talks, and said that if Washington failed to act the EU would move ahead with its own duties without “much delay”.

One of the key decisions for Mr Dombrovskis, who was confirmed in office only last week, will be whether any tariffs should kick in before the US election on November 3. 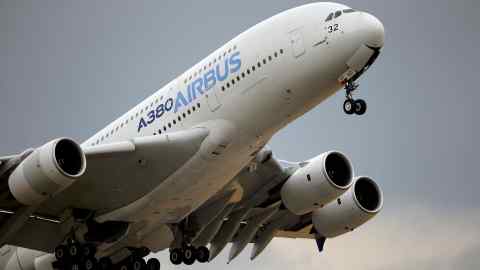 The EU needs to request authorisation from the WTO to put the additional tariffs into practice — essentially a formality now that the organisation has ruled in Brussels’ favour — something it could do at a meeting of the dispute-settlement body scheduled for October 26.

The EU’s right to hit US products is based on WTO findings against aid granted to Boeing by Washington state — advantages that Boeing insists have now been withdrawn.

The EU also says that it is now “in full compliance” with the WTO rulings. The governments of France and Germany announced in July that they were modifying the conditions of aid provided to Airbus for the development of the A350 to comply with last year’s ruling in favour of the US.

Officials at Airbus and Boeing told the FT that they were keen to see a settlement in a dispute that had become a costly distraction at a time when aircraft manufacturers were battling the devastation to their market from Covid-19. They also face a potential competitive threat from Chinese manufacturing, with Beijing aiming to bring its C919 single aisle into service next year.

“Now more than ever the only way out is a negotiated solution because compliance measures are blocked. Let’s sit around the table and craft something that works for both sides,” said a person close to Airbus.

Attention in the US has been focused on the fact that the EU retaliatory tariffs include aircraft. These punitive duties would come at a critical time for Boeing as the company wants to have its 737 Max recertified following deadly crashes and a safety investigation.

A person close to Boeing said: “This ruling allows the US and the EU to get into a room and deal with a handful of issues that address their complaints and to level the competitive field going forward.”