Government ministers of poor and indebted nations will this week appeal to their creditors for a much more ambitious debt relief effort as they grapple with the healthcare and economic consequences of the coronavirus pandemic.

They will set out their case for greater support from foreign governments and multilateral lenders as delegates gather for the annual meetings of the IMF and World Bank.

Financial assistance for cash-strapped governments has so far fallen well short of what is needed — and of what advanced economies have been willing to do for themselves — according to critics.

As Covid spread across the world this spring, the G20 group of leading nations hammered out an agreement to allow 73 of the world’s poorest countries to postpone this year’s official bilateral debt repayments for three years. But larger options faltered as both China and the US proved reluctant to engage in wider collective action.

So far 43 countries have applied for debt suspensions through the initiative, delaying about $5.3bn of payments this year — less than half of the $11.5bn available, according to the World Bank.

Critics say the debt service suspension has been hobbled by confusion and disagreement over which lenders should take part and on what terms. Private sector creditors, including commercial banks and bondholders, are not involved and have continued to receive repayments. China, which has emerged as a significant source of lending to poor countries in recent years, has contributed only partially.

Only three of the 43 countries involved have asked private creditors for comparable debt relief and no agreements have yet been reached according to the IMF.

The G20 is expected to announce an extension of the repayment moratorium as early as this week. But finance ministers in nations in need of debt relief told the Financial Times that much more should be done.

“The ability of central banks in the west to respond (to the pandemic) to an unimaginable extent and the limits of our ability to respond are quite jarring,” said Ken Ofori-Atta, finance minister of Ghana.

Ghana has been vocal in criticising western nations for allegedly neglecting the mounting crisis in Africa while finding trillions of dollars to stimulate their own economies.

Adama Coulibaly, minister of economy and finance for Ivory Coast, said: “We hope that the (debt service suspension) will be extended for another year so that the initiative can produce real impact.”

But Ukur Yatani, Kenya’s finance minister, told the FT that his country would stay away from the initiative. “Pushing our repayments out by three years without giving us a break would put a heavy load on us. We have some heavy repayments around that time,” he said.

Instead Mr Yatani said his hopes were on an IMF programme which Kenya has begun to negotiate.

Richard Kozul-Wright, director of development strategies at the United Nations Conference on Trade and Development, said “anything that provides resources that can be used to address the pandemic in the most vulnerable countries has to be welcomed”. But, he warned, “in the wider picture, given the financial constraints those countries face, (the debt service suspension) just seems like a drop in the ocean”.

Vera Songwe, head of the UN Economic Commission for Africa, is co-ordinating an appeal by African finance ministers for $100bn a year for the next three years to support stricken economies on the continent.

This is a fraction of the fiscal and monetary stimulus already delivered in the US and Europe when compared to Africa’s combined annual economic output of about $2.6tn, she said. 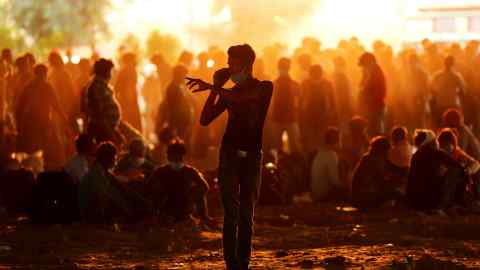 Although Ms Songwe wants the initiative to be expanded to benefit more countries, she said that a loan guarantee facility to reduce poor countries’ borrowing costs — which are already prohibitively expensive for many with low credit ratings — would be more powerful.

The “ideal private sector contribution to this crisis” would be for investors to agree “to make less income so that countries can access the resources they need more cheaply”, she said.

The question is how to fund such a facility. The IMF could launch more of its so-called special drawing rights (SDRs) — a form of proxy reserve asset — but that possibility has been vetoed by the US.

Ms Songwe has appealed to G20 central banks to back the idea.

Ghana supports the idea of using SDRs to help cushion emerging economies’ finances and has been frustrated at what it sees as US opposition to the proposal.

“Not only should we create new SDRs to help us, but a good number of western countries don’t use them which means they could be transferred to us to avert our liquidity issues descending into insolvency issues,” Mr Ofori-Atta said.

Unless this week’s lobbying produces fresh momentum, however, the finance ministers of many developing economies will be left contemplating how to cope in the months to come, as the Covid costs mount.

“It is unthinkable that in a global pandemic, the world’s poorest countries are having to choose between making debt service payments and keeping their economies afloat,” said Gayle Smith, president of the One Campaign against poverty.