The US economic recovery is in danger of being weaker and more uneven if Congress and the White House fail to agree on a new round of fiscal stimulus, according to mounting warnings from Wall Street and academic economists.

In recent weeks, hopes have faded for an accord before November’s election to pump $1tn or more in government money into the world’s largest economy through direct payments to households, enhanced jobless benefits and aid to small businesses and state and local governments.

The diminished chances of additional fiscal support have caused many economists to fret that the US rebound will lose steam in later 2020 or early 2021, creating a drag on the global economy as it tries to recover from the worst contraction since the second world war.

“The risk of fiscal fatigue where policymakers stop providing stimulus or start trying to claw back too early is a meaningful global risk,” said Nathan Sheets, chief economist for PGIM Fixed Income. “What’s going on in Washington right now is in some sense exhibit A for that.”

You’re just going to have more of that bifurcation, with wealthy people and professional jobs in the service sector doing just fine . . . and then a lot of people in working class jobs in deep distress

Ian Shepherdson, chief economist at Pantheon Macroeconomics, said US output could grow at an annualised rate of 25 per cent or more in the third quarter as it bounces back from the historic contraction in the first half of the year. But he expects that figure to drop to 10 per cent in the fourth quarter and would not be surprised if it was less than that.

“What they are doing now, or rather what they are not doing now, is raising the risk that large bits of the economy will be a wasteland by the time a (Covid-19) vaccine comes through,” Mr Shepherdson said. “That doesn’t mean it can never recover but it does mean that the recovery will be longer and harder and more painful and there’ll be a lot more misery in the meantime. It seems very counterproductive to me.”

The chance of a last-minute compromise on Capitol Hill remains a possibility as lawmakers from both sides call for a solution. But there have been no signs of forthcoming concessions, and the legislative calendar is running out of days before members of Congress return home ahead of the election.

Economists say one of the biggest dangers to the recovery is that consumption could falter after being supported so heavily by direct payments to households worth up to $1,200 per adult and emergency federal unemployment benefits of $600 per week that were included in the $3tn of stimulus approved at the start of the pandemic.

“It most certainly will have an impact,” said Julia Coronado, founder of Macropolicy Perspectives. “Does it double dip (into recession)? That’s not my base case but at a minimum it flattens out the recovery and deepens the permanent damage and that’s not good.”

Ms Coronado said the lack of fiscal support could fuel the economic disparities that have emerged as a key feature of the pandemic recovery. “You’re just going to have more of that bifurcation, with wealthy people and professional jobs in the service sector doing just fine . . . and then a lot of people in working class jobs in deep distress.”

How is coronavirus taking its toll on markets, business, and our everyday lives and workplaces? Stay briefed with our coronavirus newsletter.

Economists of many stripes also have been lamenting the lack of agreement on federal assistance to cash-strapped state and local governments. President Donald Trump has argued that such aid would represent a bailout for badly run Democratic local governments.

Ben Bernanke, the former Federal Reserve chair appointed by former Republican president George W Bush, in July warned of a “significantly worse and protracted recession” if no additional federal help was given to state and local governments.

“If we have to see states reducing spending, cutting teachers, cutting police, and other things that states and local governments do, you’re really playing with fire,” said Alan Blinder, a Princeton University economics professor who formerly served as Fed vice-chair, appointed by Democratic president Bill Clinton.

Maurice Obstfeld, the former IMF chief economist and now a senior fellow at the Peterson Institute for International Economics, said local and state governments were facing estimated budget shortfalls of between $500bn and $1tn. “Without the federal government effectively borrowing in order to support them, you’re going to have a wave of austerity, and that’s not healthy for the overall economy,” he said. 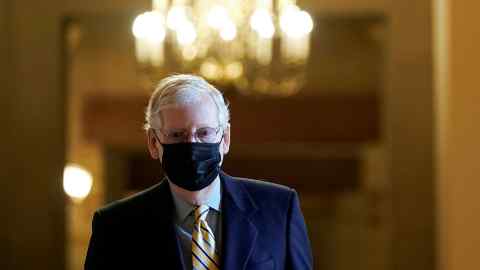 One reason a deal on Capitol Hill has proved elusive is that the economy has done better than many expected, with unemployment falling to 8.4 per cent from its April peak of 14.7 per cent, even as many states were hit by a surge of coronavirus cases in the summer.

Paul Ashworth of Capital Economics said the recovery would be slower if there was no stimulus deal, but it would not be reversed. “As the private economy gets up, back and running, you would expect to see less fiscal spending anyway. These were emergency measures and now we’re in less of an emergency situation,” he said.

Markets, too, have been fairly relaxed about the lack of agreement on a new stimulus package. “I think market participants have a sense if things start to sour in terms of economic performance that the Fed will provide further stimulus and in some sense remove a good chunk of the downside tail risk for them,” said Mr Sheets of PGIM Fixed Income.

Yet Mr Shepherdson said there have been warning signs in recent employment numbers, including higher weekly jobless claims, and other high-frequency data that suggested the labour market was stalling.

“People can see with their own eyes that the economy is not motoring along,” he said, adding: “It’s very hard to see how taking away the single biggest support for personal incomes can do anything other than depress growth.”