When she was growing up in Le Havre, Christine Lagarde joined France’s synchronised swimming team, which she later described as “a sport of resistance and endurance” that taught her how to “grit your teeth and smile”.

The European Central Bank president may need those skills when she unveils the central bank’s latest monetary policy decision on Thursday and tries to explain why, despite a nascent economic recovery, it is still too early to seek an exit from its emergency bond-buying programme.

Having ramped up its monetary stimulus dramatically in response to the disruption of the coronavirus pandemic, Ms Lagarde signalled in a video interview with the Financial Times last week that the ECB is now set to pause and take stock before any fresh action.

“Through the impact of the massive programmes that we put in place, the situation has calmed down enormously,” the ECB president told the FT, adding: “We have done so much that we have quite a bit of time to assess (the economic data) carefully.”

At its last monetary policy meeting in early June, the ECB expanded the amount of bonds and other assets it plans to buy under its Pandemic Emergency Purchase Programme from €750bn to €1.35tn and extended its timespan until at least the end of 2022.

Since then, the outlook for the eurozone economy has become slightly less apocalyptic. Consumers went on a spending spree after shops reopened in May, helping retail sales across the region make up much of the ground lost with record falls in March and April, while industrial output also recovered, albeit at a slower rate.

This has prompted some senior policymakers — including ECB executive director Isabel Schnabel and Dutch central bank governor Klaas Knot — to say it may not need to spend the entire €1.35tn put aside for its emergency bond-buying programme after all.

Calls for the ECB to wind down its main crisis-fighting tool earlier than expected could intensify if EU leaders reach agreement on a proposed €750bn recovery fund to support countries hit hardest by the pandemic at a summit later this week.

Yet Ms Lagarde is likely to keep stressing that a deal on the EU recovery fund is far from certain this year and the economy is still a long way from making a full recovery.

The eurozone has so far avoided a big surge in bankruptcies or job losses. But that is only thanks to massive government support as well as monetary stimulus by the ECB. There are big questions about how long taxpayer support will last and what will happen after it ends.

“For now, the ECB can afford to wait and see,” said Florian Hense, economist at Berenberg. “Better that the ECB overdoes it a little now and pull back at a later date than do too little and run the risk that the recovery could fizzle out.”

Crucially, inflation remains much closer to zero than to the ECB’s core target of just under 2 per cent. So Ms Lagarde is likely to grit her teeth and smile as she explains why the ECB is still a long way from declaring the crisis over and scaling back its bond-buying.

The onset of Covid-19 has reminded us of the need for international co-operation, but so does the challenge of climate change, writes Martin Wolf in the FT. These threats demand an alliance of politics with expertise, both domestically and globally, just as happened in the 1940s and 1950s. (chart via FT) 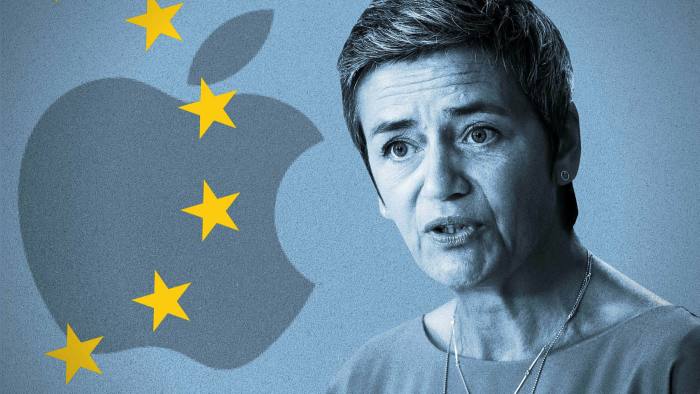 Vestager routed
Brussels has suffered a landmark defeat at the hands of EU judges who annulled a 2016 decision demanding Apple pay €13bn (plus interest) in back-taxes to the Irish government. The tech giant and the Irish government won their appeal against the European Commission on Wednesday, after the EU courts determined that Brussels had failed to show the “requisite legal standard” of proof that Apple received illegal state aid from its tax arrangements. Here’s the FT’s full take.

The decision is a bitter blow for Margrethe Vestager, one of the few members of the Brussels elite with international name recognition and a personal brand of no-nonsense politics. The EU’s competition policy supremo’s pursuit of Apple was the crowning achievement of a war against “sweetheart tax deals” that she waged during her first mandate; now it has come back to haunt her second term.

The commission said it was considering its options but did not confirm it would mount an appeal. The executive has two months to decide whether to challenge the ruling at the EU’s top court.

Apple’s victory has also supercharged EU efforts to find another way to fight multinational tax avoidance, including by dusting off an obscure article of the bloc’s treaties, as reported by the FT earlier this week. Here’s the FT’s breakdown this morning of why all routes ahead are treacherous from here.

Another big day in Luxembourg
There’s no let up from the European court. The judges take centre stage again this morning as the ECJ rules on the legality of international data transfers from the EU to the US. At stake are the mechanisms that thousands of companies rely on in the digital economy. Reuters has a preview.

Populism and the pandemic
Rosa Balfour at Carnegie Europe warns EU policymakers and mainstream politicians against thinking that Covid-19 has killed off the threat of nativist and populist movements.

Clear off
EU financial regulation chief Valdis Dombrovskis has urged governments and MEPs to quickly adopt rules that will allow the EU to pull core activities out of the City of London and on to the continent after Brexit. In a letter seen by the FT, Mr Dombrovskis says the new system needs to be fully operational for the end of Britain’s post-Brexit transition period. The rules will allow EU authorities to set conditions for clearing houses to work with European customers, with the possibility for Brussels to pressure platforms to move inside the EU.

In search of a Macronian miracle
Paul Taylor at Politico argues that the French president needs a “miracle” to navigate his way through demands to revive a pandemic-hit economy and make it green in the run-up to the next presidential election:

“Given a national culture of sometimes violent protest, which has dogged Macron’s efforts to reform labour law, pensions and carbon taxation, his reshuffled government under new Prime Minister Jean Castex faces a winter of discontent as lay-offs pile up, companies go to the wall and a coronavirus generation of school and college-leavers struggles to find work.”

Coming up on Thursday
The European Court of Justice delivers its US data decision this morning. Margrethe Vestager makes her first public appearance since the Apple decision at the European Business Summit in Brussels at 10.30am. The ECB governing council meets. Ambassadors hold further preparatory talks on the EU budget and recovery fund ahead of Friday’s summit.