The week begins under the shadow of coronavirus rising again in some parts of the world.

US states ordered new restrictions over the weekend, including mandatory mask-wearing as a surge in Covid-19 cases continued across the US, a day after the country posted its largest one-day jump in cases.

Australia, which had so far avoided the high Covid cases of other nations thanks to swift and strict measures, has placed Melbourne, the capital of Victoria, under a fresh six-week lockdown.

Eastern Europe also faces a rise in coronavirus infections, leading to new restrictions such as the mandatory use of face masks in Croatia and travel bans or quarantines in Hungary.

EU leaders will gather for two days of talks on the coronavirus recovery plan and the next-term budget.

It’s a busy week for the central banks with policymakers in Europe, Japan and Canada among those meeting.

Second-quarter earnings season gets under way in the US, with the big Wall Street banks providing the main focus of the week, while economists will have their eyes firmly on Chinese data releases, including gross domestic product, which is expected to rebound this quarter. The UK also has growth data out.

The markets will watch with interest as EU leaders meet in Brussels on Friday for what are expected to be tough discussions on the planned €750bn coronavirus recovery package and the EU’s next-term budget.

As governments engage in intense diplomacy before the two-day meeting, the overall size of the EU’s Covid-19 response has emerged as a major battleground for member states who have been at loggerheads since the commission tabled the proposal in late May.

Angela Merkel, German chancellor, has said Europe could not afford to “waste any time” in arguing over the plans put forward by Brussels to reignite the economies badly hit by Covid-19-related restrictions.

However, Europe’s “frugal” governments are pushing for cuts to the planned recovery package, while Spain, Greece and other southern member states that will be among the biggest beneficiaries of the fund stress the importance of nations choosing their own reform approach and priorities.

The Opec+ group that includes Saudi Arabia and Russia is set to hold a virtual meeting on Wednesday, when it is expected to ease curbs on oil production by around 2m barrels a day.

The group agreed its biggest-ever production cuts of 9.7m barrels a day in April. The deal ended a price war between the countries and sought to offset a collapse in demand triggered by coronavirus.

Saudi Arabia hosts a meeting of G20 finance ministers and central bank governors in Riyadh at the weekend.

The EU is expected to use the meeting to call for more co-operation on monetary, fiscal policy to tackle the coronavirus crisis and also reiterate its push for a global deal on a digital tax this year, despite the US withdrawal from talks on the matter.

Boris Johnson is this week expected to unveil plans to phase Huawei out of the UK’s 5G mobile phone networks following intense pressure from Conservative MPs and the Trump administration.

The National Security Council is due to meet on Tuesday to review a report from the National Cyber Security Centre, a branch of UK signals intelligence agency GCHQ, that raises concerns about whether the Chinese telecoms equipment maker can supply kit for Britain’s 5G networks.

North Macedonia holds a general election on Wednesday after planned snap elections in April had to be postponed owing to coronavirus. The vote will be a test of support for the pro-EU policies of former prime minister Zoran Zaev’s Social Democrats.

Parliamentary elections are due to be held in Syria on Sunday.

Last month the European Central Bank expanded its emergency asset-purchase programme, designed to soften the economic blow from the Covid-19 crisis, by €600bn to bring the total to €1.35tn.

Since then, a handful of ECB policymakers have cast doubt on whether it will ever spend the full amount. At Thursday’s policy meeting, investors will be looking to ECB president Christine Lagarde to clarify that the central bank is not plotting an early exit. No rate changes are expected.

The Bank of Japan will this week offer hints about whether it will go beyond the policy easing measures taken in response to the pandemic, or start to explore ways to unwind them. Its two-day monetary policy meeting, which concludes on Wednesday, comes as infections in its capital are rising sharply again.

The Bank of Canada is expected to leave its policy rate unchanged on Wednesday. However, the need for stimulus to help sustain the economic recovery remains and there is likely to be discussion over whether the pace of bond purchases is enough.

No changes are expected from Poland on Tuesday, Chile on Wednesday or South Korea on Thursday.

Indonesia is expected to again cut rates on Thursday.

The Federal Reserve issues its Beige Book of economic conditions on Wednesday.

Wall Street will be in the spotlight this week as second-quarter reporting season gets under way.

Citigroup, JPMorgan and Wells Fargo report on Tuesday, Goldman Sachs on Wednesday, Morgan Stanley and Bank of America on Thursday.

The lenders face challenges such as falling interest rates, a deteriorating economic environment and the need to shore up credit reserves for loans that could go bad.

However, Goldman Sachs and Morgan Stanley are set to triumph over their Main Street rivals in the second quarter as the pair of investment banking powerhouses benefited from surging trading revenues and advisory fees. 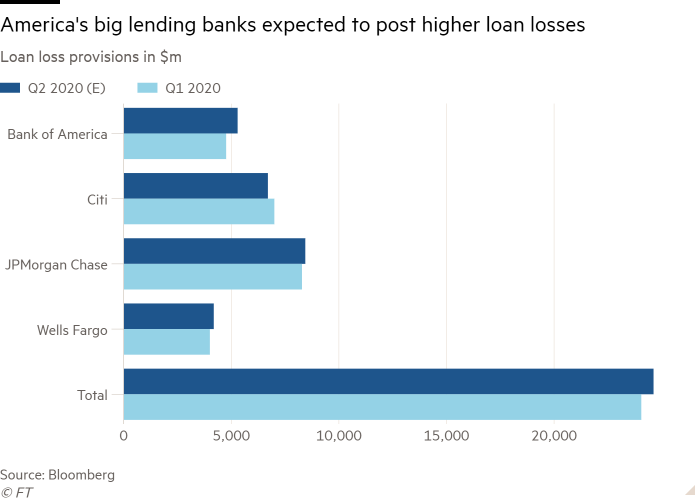 BlackRock rounds off the week for financials on Friday when investors will learn how the world’s largest asset manager fared after the brutal sell-off in the first quarter.

Delta Air Lines kicks off second-quarter results for the airlines on Tuesday in what could be the worst quarter in aviation history.

In the UK, Ocado publishes first-half results on Tuesday. The online supermarket plans to raise more than £1bn of fresh equity and debt as it seeks to capitalise on a surge of interest during the coronavirus crisis.

Ladbrokes owner GVC Holdings delivers a half-year update on Thursday. Lockdown is likely to have taken its toll, but investors will look for guidance on how fast demand is likely to spring back and whether punters will have the money to spare for bets when hard times hit.

In fashion, Asos updates on Wednesday with trading figures for the four months to June 30 and Burberry has a trading announcement on Thursday.