This week Christine Lagarde, president of the European Central Bank, gave the strongest hints so far about how she and her colleagues may update the ECB’s strategy in a review now under way. The speech merits close reading; ECB-watchers will have been excited by the suggestions Frankfurt may follow in the footsteps of the Federal Reserve and not just commit to a clean 2 per cent inflation target but even “catch up” with subdued inflation by letting prices grow faster than the target pace for a period.

But here I want to draw your attention to another speech, by Lagarde’s Executive Board colleague Isabel Schnabel. On Monday, she gave the punchiest argument I have seen for the ECB taking an active role in pushing forward the decarbonisation of the eurozone economy. The key message was that “collective action, by governments, firms, investors, households and central banks, including the European Central Bank, is required to accelerate the transition towards a carbon-neutral economy and correct prevailing market failures”.

The ECB itself has clearly intensified its effort to understand the economics of the climate challenge, and the speech brings surprising economic knowledge to the table. Schnabel makes clear that the economic costs of climate change are not just something in the future; they are already with us. Judging from the chart reproduced below, from the 1980s to the past decade average annual insured losses from climate-related catastrophes increased perhaps sixfold. She also presents the result of ECB modelling showing how costly it could be to wait and to be forced to adapt more drastically at a later stage.

And even though Europe is ahead of many other regions in reducing its carbon emissions, it has some big obstacles on the way. Another chart from the speech shows that a larger share of European workers are employed in the most carbon-emitting sectors compared with the US. While the US may have further to go in absolute emissions cuts, Europe may, in other words, have a bigger political challenge in reallocating workers from “brown” to “green” jobs. 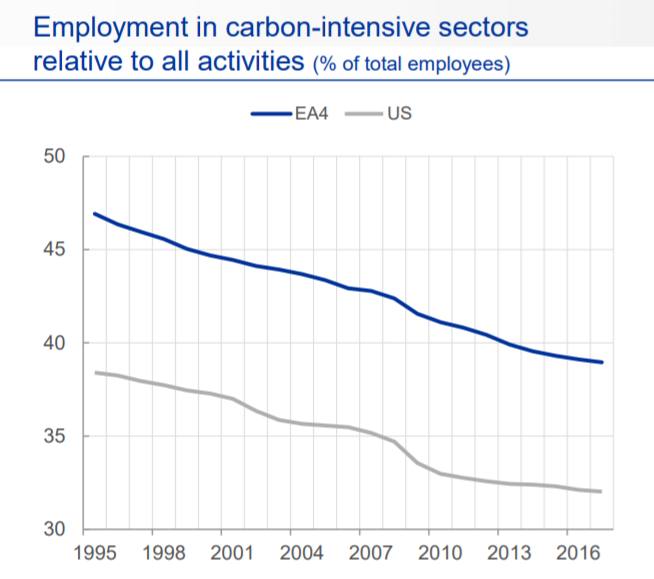 At the same time, Schnabel shows that environmental regulation need not hold back growth. In particular, recoveries from recessions are not threatened by decarbonisation policies; indeed, recoveries can be particularly fruitful times to shift the economy from more to less carbon-intensive activities, as the chart below suggests. There is a parallel here with the argument I made two weeks ago that the current recovery is a good time to strengthen policies for better-quality jobs. 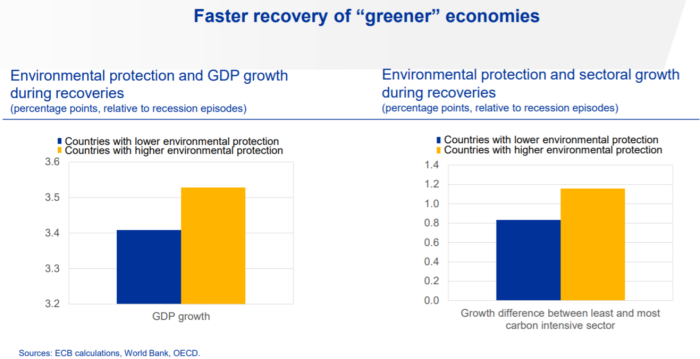 What to do about it? The key is in the title of the speech — “When markets fail” — since the challenge is that markets price neither the problem nor the solutions correctly. (The mispricing of environmental economics is explained very well in a new FT video, part of a special report on investing in nature.) As a result, sufficient incentives are still missing for businesses, especially smaller ones, to act sustainably.

It follows that the job of economic policymakers, including the ECB, is to see what they can do to correct market failures. A first step is to heighten demands for climate-related disclosure and measurements so that the scale of mispricing can be understood. But as Karl Marx taught, one may interpret the world but the point is to change it. The most significant line in Schnabel’s speech entails precisely that: “In the presence of market failures, market neutrality may not be the appropriate benchmark for a central bank when the market by itself is not achieving efficient outcomes.”

This is a momentous move. It means the ECB is ready to at least contemplate outright targeting what I have called the “green spread” — the difference in financing conditions for low-carbon and high-carbon activities. Schnabel does not use that terminology, but does present research showing that the green spread is unhelpfully narrow at the moment.

There is no suggestion that central banks can do all or most of the work — tax structures, fiscal policy and regulatory frameworks are the most important. Indeed Schnabel points out that equity finance is better suited to fund the investments needed for the carbon transition, which means the EU’s capital markets union agenda is essential also from a climate change perspective.

But monetary policymakers have plenty of tools to target the green spread. Schnabel’s speech mentions excluding bonds from being eligible for ECB collateral or bond-buying, adjusting haircuts (discounts) to reflect climate considerations, and even proposals (in a footnote, but still) for green targeted lending to banks. The central bank’s ability to affect financing conditions for the carbon transition is not in doubt; what matters is whether it wants to do so.

In that regard, two final observations are worth pondering. One is this sentence: “we could consider . . . excluding certain bonds — based on clear and transparent rules — that are used to finance projects that conflict with the decarbonisation objectives of the EU” (my emphasis). It is not explicit, but we should read this as an acknowledgment that the ECB has more than one mandate, and if price stability is safeguarded, it must legally support the purposes and general economic policies of the EU.

The other is that Schnabel proves you need not reject mainstream economics in order to take the climate challenge seriously. On the contrary, her entire argument deploys the analytical arsenal of standard economic tools to great effect. It is exactly a hundred years ago since the great British economist AC Pigou introduced the concept of “externalities” — the unpriced effects your consumption or production have on others — into economics. The ECB’s full use of it would be a fitting tribute.