All across the country, the gears of the economy are grinding slowly and creakily into motion. Retail stores are newly open for in-person shopping in California. It’s possible to get a much-needed haircut in Alabama. And in Alaska, bartenders are even slinging drinks again — albeit with strict capacity and spacing limits.

The reopening of the economy might seem like a promising sign. After all, as shuttered stores and restaurants reopen, workers can return to their jobs or look for new positions, and industries that have seen slowdowns can resume operations. Some politicians — including President Trump — have promised a fast recovery.

But how quickly will the economy really be able to bounce back? How long will we be stuck with a double-digit unemployment rate and a host of other historically bad economic indicators?

We wanted to get a sense of what the experts were thinking. So we partnered with the Initiative on Global Markets, a research center at the University of Chicago Booth School of Business, to survey a group of quantitative macroeconomic researchers who work in academic settings about the trajectory of the economic crisis. In consultation with Jonathan Wright of Johns Hopkins University and Allan Timmermann of the University of California, San Diego, two experts on macroeconomic forecasting, we asked the panel questions like what the shape of the recovery will resemble, when gross domestic product will return to its pre-crisis levels, and what the unemployment rate will be at the end of the year. The survey was conducted May 22 to 25.

Overall, the researchers predicted that although the economy will probably start to improve in the second half of this year, there won’t be a quick rally from this recession. “The panelists believe, on the whole, that the recovery from this crisis is going to be a very, very lengthy process,” Timmermann said. “We’re going to be seeing serious effects for years and years.”

Our sample of economists thought it was more likely than not — with an average probability of 54 percent — that the next quarter to see positive real GDP growth in the U.S. (relative to the previous quarter) would be the third quarter of 2020. But that’s probably a low bar to clear; the economy shrunk by 4.8 percent in the first quarter and is likely to contract even more in the second quarter. And there’s a significant chance that the contractions could continue further into the future: The forecasters we polled thought there was a 23 percent chance that the economy would not grow again until the fourth quarter of 2020 and a 22 percent chance that it wouldn’t grow until the first quarter of 2021 or later.

“The economy almost has to grow (in the third quarter) because we’ll be starting from such a low base,” Wright said. “Unless, of course, things seem to be looking good right now and then in July or August there’s another wave and we go straight back to lockdown. Then you could have another negative quarter.”

Another way to think about the recovery process is by considering the shape of the recession. We presented the economists with four specific options of how the trajectory of GDP might look as charted over 2020 and beyond: V-shaped, with a sharp fall and a sharp rebound; U-shaped, with a long period between the beginning of the recession and the recovery; W-shaped, with a sharp recovery followed by another sharp fall and recovery; or “Swoosh”-shaped, with a sharp decline followed by a very slow recovery (picture the Nike logo). More than half of respondents — 58 percent — thought the long, slow recovery of a “Swoosh” shape was most likely, with 19 percent predicting a U-shape and 13 percent calling for a W-shape with multiple declines and recoveries. Tellingly, only 1 out of 31 economists forecasted a V-shape, which would see a quick recovery after the sharp decline of the past few months. 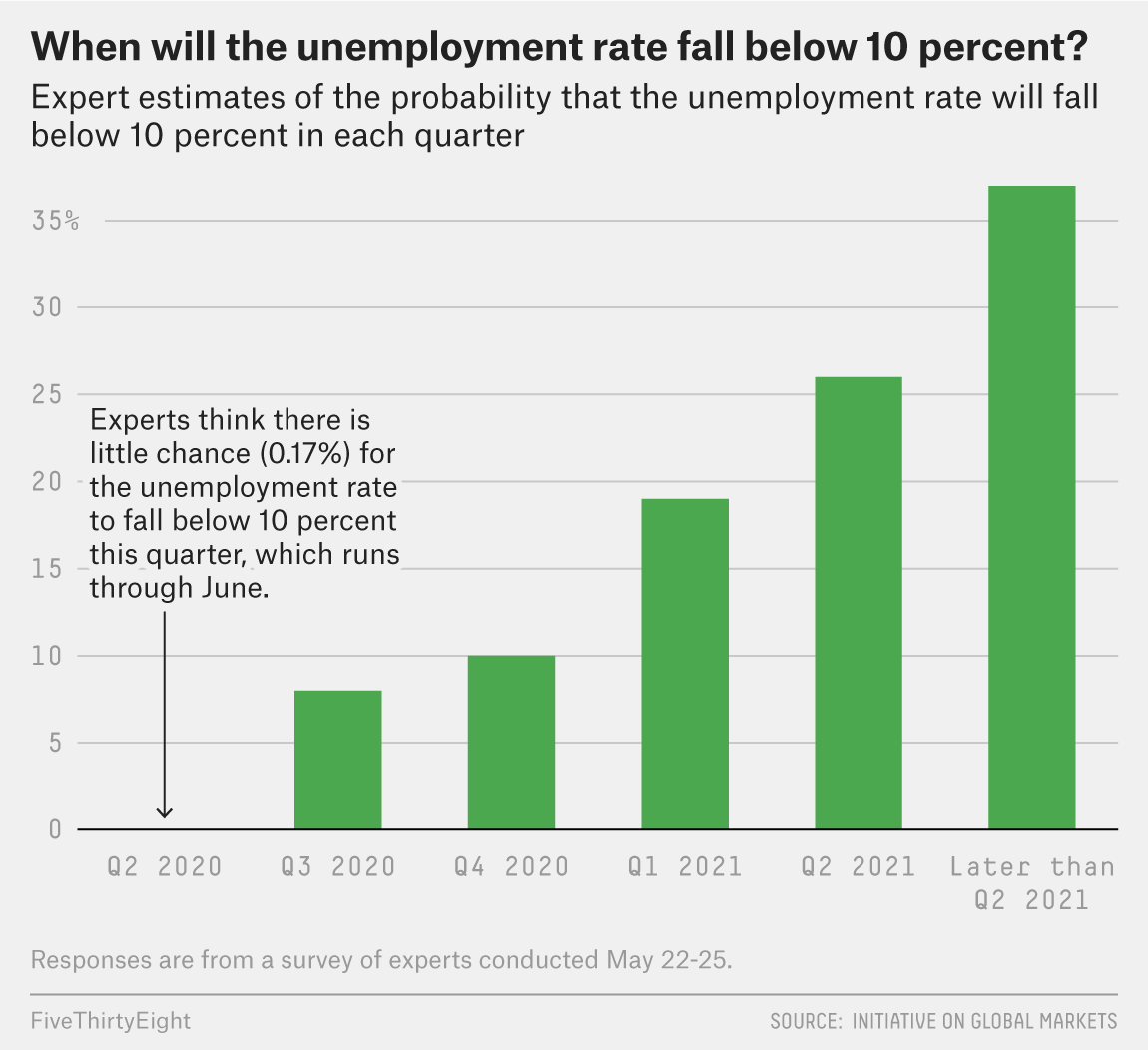 To give you an idea of how terrible a double-digit unemployment rate potentially sustained over 21 months would be, the unemployment rate had been at or above 10 percent for only 11 months total from 1948 through 2019.

But forecasting our economic future is a challenging business even when we’re not in the middle of a global pandemic. And as our respondents filled out their questionnaires, they were weighing a lot of unknowns and making their own assumptions about the trajectory of the virus and the economic crisis — including when a vaccine will be developed, how quickly businesses can get up and running, and even whether there will be a second wave of COVID-19 outbreaks in the summer or fall. Our economic indicators aren’t really designed to capture such a quickly unfolding crisis, which makes it even more difficult to predict what they’ll be saying a month or a year from now. “I assumed a base scenario where there’s a slow lifting of lockdown orders and no reversal,” Wright said. He also assumed there would be continued support from the Federal Reserve and Congress. “But what if there’s a big standoff in Congress and unemployment benefits don’t get extended? What if there’s a second wave of the virus?”

As such, many of the experts predicted a wide range of possible outcomes, particularly on questions that required them to project more than a few months into the future. For example, the economists’ median prediction for what the unemployment rate would be in the December 2020 jobs report — 12 percent — was just a little lower than the unemployment rate in the April jobs report (14.7 percent). But the experts’ confidence in their responses varied a lot — with upper-bound estimates ranging from 10 to 30 percent and lower-bound estimates ranging from 6 to 15 percent. 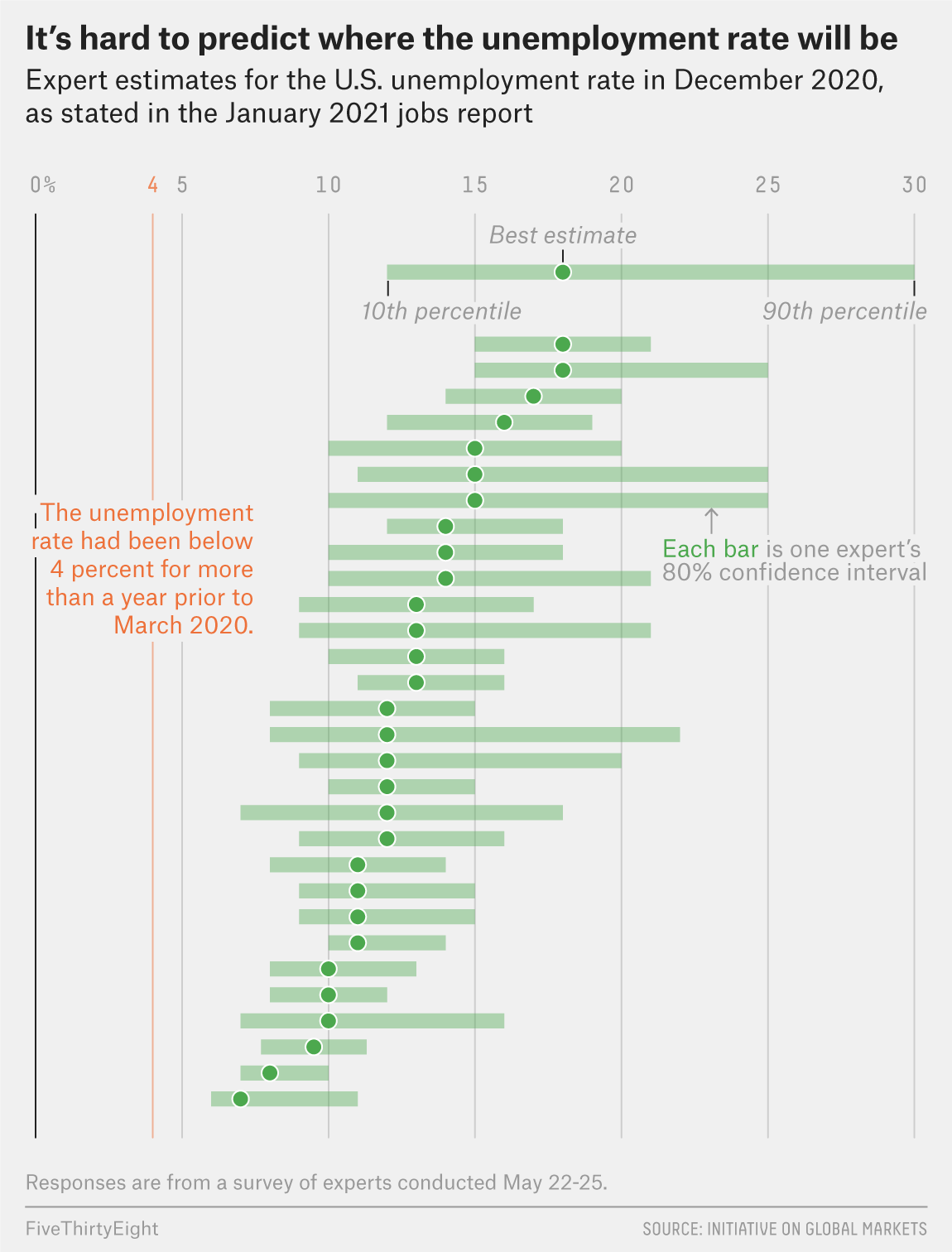 You can also see this uncertainty in our earlier question about when GDP will finally recover. The economists agreed that it was unlikely for real GDP to return to where it was before the COVID-19 pandemic anytime soon. But beyond that, they weren’t particularly sure when a recovery might happen.

None of these projections are especially encouraging — remember, the unemployment rate was only 3.5 percent back in February, and the peak during the Great Recession was 10 percent. But they’re also an important reminder of just how much is up in the air right now, as we scramble to simultaneously contain the virus and rev up the economy.

We’ll be checking in with the panel of economists periodically as the pandemic and economic crisis continue to unfold. Their predictions will likely shift as the economy reopens and the long-term public health response becomes clearer. But right now, even the experts don’t seem to be expecting a rapid rebound from this recession — in fact, the economic pain of the COVID-19 crisis could be with us for years.