When coronavirus kicked off a historic economic crash and sent stock markets into freefall in March, investors and companies all over the world rushed in to the one currency they trusted above all others: the dollar.

Desperate for safety and in need of cash to keep businesses functioning through an economic crisis on an unprecedented scale, they snapped up the US currency wherever they could, sending it racing higher.

The scale of the rally — 9 per cent in as many days — was extreme, matching the scale of the crisis. But the move itself was predictable. When the going gets tough, the dollar jumps — a pattern familiar from the 2008-09 financial crisis and in every geopolitical flare-up of recent decades.

“If there is turmoil, you want safety,” says Eswar Prasad, a professor at Cornell University and a former senior IMF official. “And where do you go? The dollar.”

Just a few months later, however, the US currency has suffered its poorest monthly performance in 10 years, hitting its lowest point against a basket of peers since 2018. The 5 per cent drop in the value of the dollar in July might sound modest, but in the relatively stable foreign exchange market that counts as dramatic.

Such a sharp move in the dollar inevitably raises a series of questions that go to the heart of the global financial system and the unique role that the US currency plays.

In the short term, the decline in the dollar is reflecting the potential weakness of the US economy as the pandemic spreads in southern states.

While much of the world is slowly crawling out of lockdowns, the US has been an outlier among developed economies for its patchy management of the crisis and increasingly fractious political debate over how to suppress the virus. Fund managers are betting that its central bank will need to lavish yet more stimulus on the economy, weakening the dollar further along the way.

But there are also more fundamental worries playing out. Gold is soaring to record nominal highs as investors seek an alternative to the US currency. Some are openly asking, once again, whether US institutions are now too weak for the world to rely on the dollar. American politics is becoming even more polarised and potentially dysfunctional just at the moment when the EU is showing new signs of unity and purpose. Brad Setser, a former US Treasury official now at the Council on Foreign Relations, says it is “far-fetched” to believe the euro will suddenly supplant the dollar. Instead, he says, “US mismanagement” is more likely to slowly chip away at the dollar’s standing. Given his controversial suggestion to delay November’s presidential poll, Donald Trump’s willingness to accept the outcome of the election will be closely watched.

For the time being, however, academics broadly agree that the moment when the world decisively shifts away from the US currency has not yet arrived. “The events in March have, if anything, strengthened the international role of the dollar,” says Hyun Song Shin, head of research at the Bank for International Settlements.

Mark Sobel, a former senior US Treasury official and US chairman of Omfif, a financial think-tank, agrees: “It reminded the world about the indispensable role of the Federal Reserve in the global financial system.” 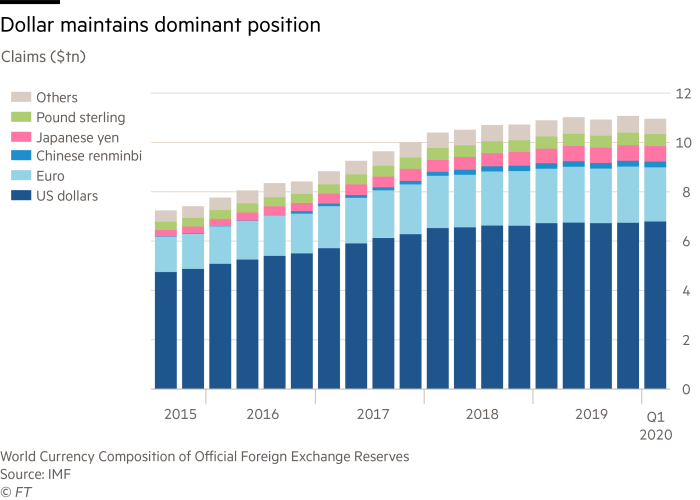 These are confusing times in markets. A decline in the dollar’s value is typically a sign of global economic optimism. It generally shows that other countries have good growth prospects and that dollar-based investors are happy to put their money to work in riskier locations.

The outlook is different this time. The dollar’s decline has accelerated in the past week, while government bond prices have remained close to record highs, a reflection of expectations of low growth and a desire for safe assets. That suggests investors have identified a specific American problem.

“The US government bond market is reflecting the fact that the US outlook is weakening,” says David Riley, chief investment strategist at BlueBay Asset Management in London. “There’s going to have to be more stimulus. This is where the gold bug view comes in, where sooner or later this is a debasement of the global reserve currency. So you go into gold.”

Gold hit a record high of $1,983 a troy ounce this week. Even sterling, held down against other major currencies by the prospect of dropping out of EU trade structures without a safety net at the end of this year, has gained against the dollar, reaching over $1.30, a 7 per cent climb in July. 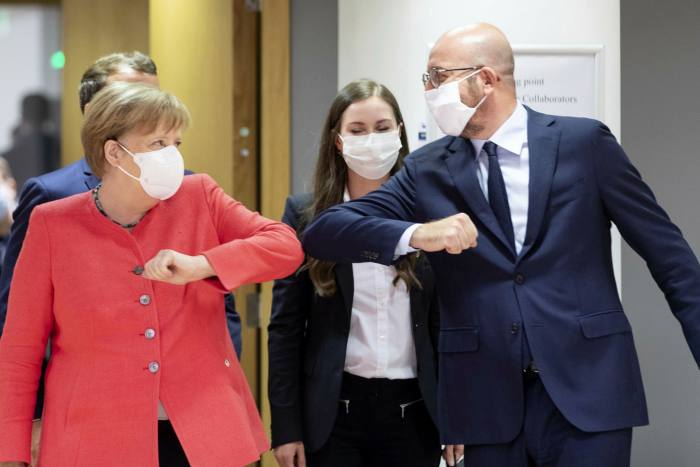 German chancellor Angela Merkel elbow bumps European Council president Charles Michel. Much of the dollar’s decline has been against the euro, which has appreciated 10 per cent since May © Thierry Monasse/Getty

The dollar has been dragged down by the sharp rise in coronavirus infections in the US, which have prompted fears of another round of economically damaging lockdowns.

“We’ve totally blown it in terms of controlling Covid,” says Stephen Roach, a professor at Yale University and a former chair of Morgan Stanley Asia.

At the most recent meeting on monetary policy this week, Fed chair Jay Powell warned that the trajectory of the US economy would “depend significantly on the course of the virus”. Taken together with his commitment to supporting the economy, investors anticipate additional stimulus in the coming months.

“The Fed is likely to be easier than most other central banks,” says Michael Swell, head of global fixed income portfolio management at Goldman Sachs Asset Management. Benchmark interest rates are likely to remain at or near zero for years, he says, “even in the event that you see significant improvements in growth and employment”. 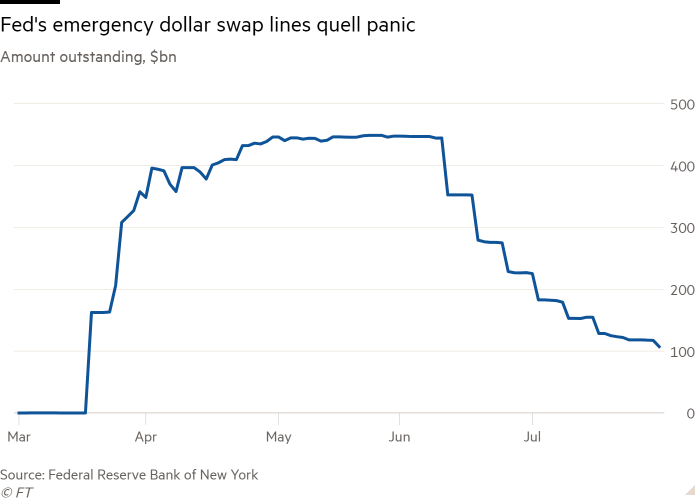 Much of the dollar’s decline has been against the euro, which has appreciated 10 per cent higher since May. In July, EU leaders agreed on a coronavirus rescue package for the bloc that hinges on pooling debt across member states for the first time with a large series of new collective bonds. This solidarity stands in sharp contrast to the political paralysis in the US and opens up the possibility that, eight years after the peak of the eurozone debt crisis, the EU and euro area may be able to start offering a more institutionally robust and liquid currency to conservative long-term investors such as central banks.

But that will not happen overnight. “The euro has been missing a deep low-risk bond market and now there is a possibility that this will change. But even so, it will take a long time to develop and become as mature and liquid as US Treasuries,” says Jeffrey Frankel, a former economic adviser to the White House and a professor at Harvard University.

“There really are not sufficiently large alternatives to allow (reserve managers) to shift en masse out of dollars,” says Barry Eichengreen, economics professor at the University of California, Berkeley. Donald Trump at a coronavirus briefing. The US has been an outlier among developed economies for its patchy management of the crisis © Yuri Gripas/Pool/EPA

Reserve currency status confers significant benefits to the host country. For the US government, it has not only meant additional income in the form of seigniorage — the profits made when issuing a currency — but also the capacity to borrow significant sums of capital very cheaply.

Further bolstering the dollar’s supremacy is the fact that it plays an outsized role in global trade and finance, with nearly a fifth of all trade deals outside the US invoiced in the currency.

The dollar is even more entrenched in global currency trading, with some 88 per cent of the deals in the $6.6tn daily market traded against the greenback, according to the Bank for International Settlements. This further limits the ability of central banks to diversify away from the dollar, according to Francesca Fornasari, head of currency solutions at Insight Investment.

As most currencies are, by default, traded against the dollar, euros would be of little use when, for example, an emerging market central bank needs to stop its currency from plummeting. “Central banks hold reserves as a security blanket for when markets become dysfunctional. If you’re the central bank of Indonesia and your currency is measured against the dollar, you really need to have dollars to be able to intervene,” says Ms Fornasari. Mark Sobel, a former senior US Treasury official and US chairman of Omfif: ‘(March) reminded the world about the dollar’s dominance as a reserve and financing currency’ © OMFIF

But this is not the first time in recent years that the dollar’s dominance has been questioned.

In 2008, an academic study by Mr Frankel and Menzie Chinn, a professor at University of Wisconsin — Madison, predicted that by 2022 the euro would surpass the dollar as the world’s leading reserve currency. At the time, the euro was powering towards its all-time high, peaking close to $1.60 in April of that year to round off an 82 per cent rise against the dollar. In the same period, the dollar index shed 40 per cent of its value, hitting a record low in March that year.

The onslaught of the global financial crisis just a few months later, which unleashed demand for safe dollar assets, ended that bout of speculation about the euro supplanting the US currency.

The latest available data from central bank reserve managers shows that the US currency’s share of their stockpiles increased in the first quarter of the year, with nearly 62 per cent of the roughly $11tn of global foreign exchange holdings allocated to the dollar. This is just two percentage points lower than in 2008, according to data from the IMF. The euro’s share of reserves peaked in 2009 at 28 per cent; in the first quarter of the year it stood at 20 per cent. Harvard professor Jeffrey Frankel: ‘It will take a long time (for the euro) to develop and become as mature and liquid as US Treasuries’ © Andrew Harrer/Bloomberg

Currency watchers once looked to China as the biggest threat to the dollar’s dominance. But, so long as its financial system remains subject to capital flow restrictions, the renminbi cannot play the part of a global reserve currency, analysts say. Its share of global central bank holdings has increased but still stands at only 2 per cent.

But regimes do change, posing a long-term rather than immediate danger to the dollar. “People assume that nothing the US does could turn into a situation where the dollar loses credibility. But that’s wrong and you only have to look at Britain as a cautionary tale,” says Mr Frankel. “Sterling used to be the world’s reserve currency but it lost its status, which shows that you can lose that exorbitant privilege.”

Video: Gold is king but should you buy it? | Charts That Count