The coronavirus pandemic has severely undermined the UK’s public finances with the government’s debt exceeding £2tn for the first time and borrowing at its highest ever peacetime level.

Chancellor Rishi Sunak warned that the extraordinary government support for the economy had to be time limited. “Today’s figures are a stark reminder that we must return our public finances to a sustainable footing over time, which will require taking difficult decisions,” he said.

The figure is lower than expected by the Office for Budget Responsibility, the fiscal watchdog, with signs that better than expected consumer spending is supporting some tax revenues.

Meanwhile, the eurozone’s economic rebound from the pandemic is losing steam after several months of improvement, according to a widely watched survey of business activity. The IHS Markit flash composite purchasing managers’ index for the bloc fell to 51.6 in August, down from 54.9 in July, undershooting most economists’ expectations.

The euro fell after survey data showed the rebound faltering, while the pound slipped after negotiators warned of a lack of progress in Brexit talks.

The eurozone is likely to suffer a sharp increase in unemployment this autumn even as the economic recovery takes hold, the European Central Bank warned.

Four of the world’s leading central banks have further scaled back the US dollar liquidity they offer via emergency swap lines with the Federal Reserve, in the latest illustration of the global financial system’s recovery from the market panic caused by coronavirus earlier this year. The European Central Bank, the Bank of England, the Bank of Japan and the Swiss National Bank said they would offer short-term dollar funding via the Fed’s swap lines only once a week.

The Bank for International Settlements calculates that in the US, UK, continental Europe and Japan the Covid-19 shock has wiped out quoted real estate investment trusts’ (Reits) cumulative valuation gains of the past five years. But while banks are exposed, FT columnist John Plender considers that greater capitalisation by banks and the monetary and fiscal policy response to Covid-19 have put a floor under asset prices. “A banking crisis, while not inconceivable, does not feel imminent,” he concludes. 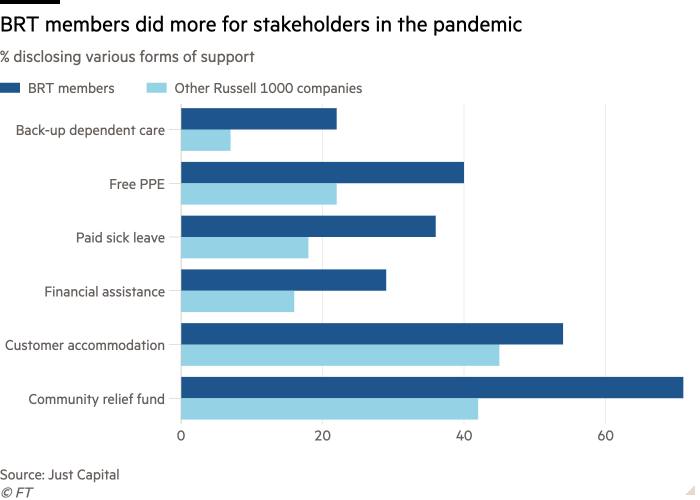 The US Business Roundtable pledge from US companies last year to be accountable to stakeholders and not just generate profits for shareholders has brought mixed results. A survey by Just Capital, which tracks corporate impact, concluded chief executives who signed it performed better than others in providing everything from paid sick leave to financial assistance during the Covid-19 crisis, but found that Americans believe big business is falling short of its responsibilities to workers, customers, communities and the environment.

Swissport, Menzies Aviation, WFS and dnata, the UK’s four biggest air services groups, said some companies in the sector could fail without help in a rare joint plea to the Treasury, and called for a new system to protect jobs once the furlough scheme winds down in October. Operators in the UK travel industry have called on the government to end its “stop-start” strategy of quarantining countries.

Demand for guns and ammunition is accelerating in the US ahead of November’s presidential election, driven by consumer concerns about protests and civil unrest and by Americans regarding hunting as a socially distanced leisure pursuit during the pandemic.

A fresh surge in coronavirus cases is putting pressure on governments on both sides of the Atlantic to maintain emergency labour market support mechanisms at a time when politicians had hoped that their economies would be gradually returning to normal. “This is slowly morphing into a long-term unemployment problem,” said Jay Shambaugh, a fellow at the Brookings Institution.

British seaside towns such as Bournemouth and Southend appear to have been some of the biggest beneficiaries of UK government measures to stimulate activity in high streets and restaurants, according to research by a public policy institute. Footfall rose more than 20 percentage points in the two town centres during periods when discounts for diners were active.

New claims for US unemployment aid rose back above 1m last week, as the pace of lay-offs picked up again in a worrying sign for the recovery of the labour market in the world’s largest economy. The Department of Labor figures also showed applications for federal pandemic unemployment assistance for those who would not qualify for regular unemployment payments rose to almost 543,000.

The UK government’s “algoshambles” in awarding grades to school leavers during coronavirus highlights a broader danger with relying on algorithms for life-changing decisions, writes the FT’s Tim Harford. They can mimic historical patterns — or ensure equality (within the limits of arithmetic) based on gender or race. But “it is impossible to give students the right grades for exams they never sat — one would have to be infatuated with algorithmic miracles not to realise that”.

While quacks and fraudsters doubtless exist, there is compelling evidence that the majority of Africa’s traditional medicine practitioners are skilled and experienced, and that their herbal prescriptions can be effective, argues commentator Patrick Gathara, who says they should be mobilised in efforts to tackle Covid-19. 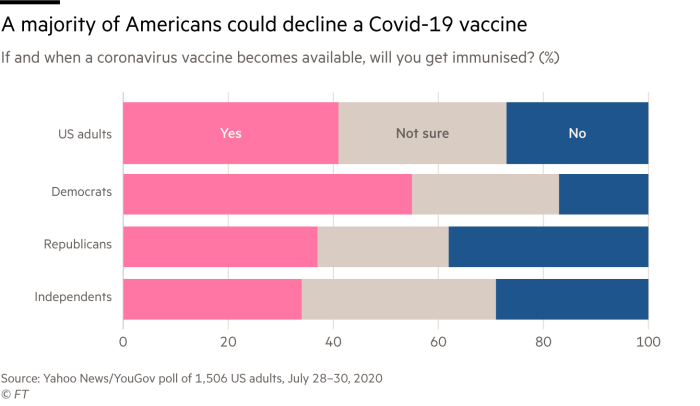 US concerns that Donald Trump will rush to approve a vaccine before the presidential election is playing into wider safety fears as those who are hesitant join up with longer-standing “anti-vaxxers”. Professor Neil Johnson, of George Washington University, warns that unless supporters of vaccinations can counter the anti-vaxxers with “guerrilla marketing” that reaches people online then they run the risk of losing the battle over immunisation.

Through its club Paris Saint-Germain, the French capital dominates football as it does every other sphere of national life, writes FT columnist Simon Kuper, a speaker at this year’s FT Weekend Festival, which runs from September 3 to 5. The club has millions of longtime supporters, mostly in the unlovely suburbs of Europe’s largest metropolitan area. Because of the pandemic, PSG’s match against Bayern Munich in the Champions League final on Sunday will be played in an empty stadium in Lisbon, but it will be watched by huge numbers on television across France.