The health secretary has said a glitch that saw nearly 16,000 Covid-19 cases go unreported in England “has not substantially changed” the government’s assessment of the epidemic.

He said a technical issue as results were processed “should never have happened” and is being investigated.

Public Health England said 15,841 cases between 25 September and 2 October were left out of the UK daily case figures.

Those who tested positive were informed – but their close contacts were not.

Experts advise that ideally contacts should be tracked down within 48 hours.

On Monday afternoon, the government’s coronavirus dashboard said that there had been a further 12,594 lab-confirmed cases of coronavirus in the UK, bringing the total number of cases in the UK to 515,571.

Another 19 people were reported to have died within 28 days of testing positive for Covid-19.

The issue has been fixed, PHE said, with outstanding cases passed on to tracers by 01:00 BST on Saturday.

Mr Hancock told MPs that extra contact tracers were being used and that 51% of those whose positive results were caught up in the glitch have been contacted a second time to trace their contacts.

He said the error had “not substantially changed” the government’s assessment of the spread of the virus and had “not impacted the basis on which decisions about local action were taken last week”.

He said care homes, schools and hospitals had not been directly affected because outbreak control in these settings “does not primarily rely on this particular PHE system”.

“This incident should never have happened. But the team have acted swiftly to minimise its impact,” he added.

He said the unreported cases meant as many as 48,000 contacts had not been traced and not been isolating, with “thousands blissfully unaware they’ve been exposed to Covid, potentially spreading this deadly virus”. 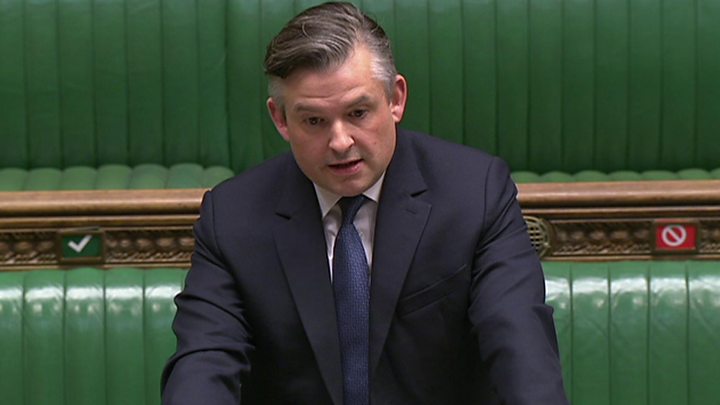 Media captionAshworth: “Thousands of people blissfully unaware they have been exposed to Covid”

It was caused by some Microsoft Excel data files exceeding the maximum size and issues in transfer of data between NHS Test and Trace and PHE.

The technical issue meant the daily case totals reported on the government’s coronavirus dashboard over the past week have been lower than the true number.

BBC health editor Hugh Pym said daily figures for the end of the week were “actually nearer 11,000”, rather than the roughly 7,000 reported.

BBC analysis found the number of cases reported for the week to 1 October increased by 92.6% in the North West after taking in the missing tests – with similar rises reflected across England.

The increase, of 8,348 cases, is mostly down to the missing tests, but the figures also included some results which came back after 2 October.

The BBC has confirmed the missing Covid-19 test data was caused by the ill-thought-out use of Microsoft’s Excel software. Furthermore, Public Health England (PHE) was to blame, rather than a third-party contractor.

The issue was caused by the way the agency brought together logs produced by the commercial firms paid to carry out swab tests for the virus.

They filed their results in the form of text-based lists, without issue.

PHE had set up an automatic process to pull this data together into Excel templates so that it could then be uploaded to a central system and made available to the NHS Test and Trace team as well as other government computer dashboards.

The problem is that the PHE developers picked an old file format to do this – known as XLS.

As a consequence, each template could handle only about 65,000 rows of data rather than the one million-plus rows that Excel is actually capable of.

And since each test result created several rows of data, in practice it meant that each template was limited to about 1,400 cases. When that total was reached, further cases were simply left off.

Until last week, there were not enough test results being generated by private labs for this to have been a problem – PHE is confident that test results were not previously missed because of this issue.

And in its defence, the agency would note that it caught most of the cases within a day or two of the records slipping through its net.

To handle the problem, PHE is now breaking down the data into smaller batches to create a larger number of Excel templates in order to make sure none hit their cap.

But insiders acknowledge that their current clunky system needs to be replaced by something more advanced that does not involve Excel.

PHE said NHS Test and Trace has made sure there are enough contact tracers working, and is working with local teams to ensure they also have sufficient resources to be urgently able to contact all cases.

The number of call attempts is being increased from 10 to 15 over 96 hours.

There have been clear problems with the government’s test and trace data, but they do not change our view of the UK’s trajectory.

Cases surged at the beginning of September, they may still be climbing, but not as quickly as anticipated just a few weeks ago.

This perspective comes from three key sets of data – the Office for National Statistics, the React study by Imperial College London and the Covid symptom tracker app.

None are blighted by either the current issues with the test and trace data or by people struggling to access a test.

The real fallout of the weekend’s statistical chaos is not the numbers, but the people who should have been contact-traced, told to quarantine and instead may have been unwittingly passing on the virus.

Have you recently tested positive? Have you been contacted by test and trace? Share your experiences by emailing [email protected].

Please include a contact number if you are willing to speak to a BBC journalist. You can also get in touch in the following ways:

If you are reading this page and can’t see the form you will need to visit the mobile version of the BBC website to submit your question or comment or you can email us at [email protected]. Please include your name, age and location with any submission.