China and much of east Asia have had a good crisis, relatively speaking. The recent rally in the renminbi shows currency markets are starting to acknowledge this. But it is just the tip of the iceberg. A shift in the economic balance, away from the west and towards Asia, was well under way before Covid-19. The pandemic just accelerated it.

Start by considering Beijing’s management of the outbreak. It is true that Covid started in China and the geopolitical ramifications of that are still playing out. However, case and mortality trends in the region have paled in comparison to many other parts of the world. A history of handling pandemics has helped, as has world-beating technology. But as the US and Europe continue to grapple with new waves of Covid cases, levels in much of east Asia remain low.

Better pandemic management has delivered better economic results. China is the only country among 48 to have reported a second-quarter gross domestic product number that was higher than at the end of 2019. Taiwan, Vietnam, South Korea and Hong Kong are the next closest.

In contrast, Spain’s second-quarter GDP was 20 per cent below year-end, and India’s 25 per cent. East Asian countries that were able to avoid lockdowns limited damage to the services and construction sectors. August activity data from China showed the recovery broadening, with consumers finally re-engaging with the economy. And this comes without any of the direct government support that western consumers have received. The growth dividend from good Covid management will continue to accrue for these east Asian countries, even as fiscal policy packages are scaled back in the west.

Another big factor for growth has been exports, as Asia finds itself with the right product mix in the new Covid era. Taiwan, South Korea and Singapore all benefited from strong tech sectors. China has also seen strong tech exports and — ironically — a surge in exports of medical and personal protective equipment.

Many analysts said the Covid crisis would disrupt global supply chains, but the early evidence underscores how difficult transitions can be. China has been picking up export market share, not the other way around. Asia is the world’s main manufacturer of goods, and that is likely to remain the case for a long time.

The most important indicator of China’s relative strength, and perhaps its most surprising, is the resilience of its balance of payments. China’s August trade balance data showed the surplus rising again after a dip in the spring. In the middle of a huge global trade shock, this is a remarkable outcome — and even more so, given it reflects solid imports as well as strong exports. 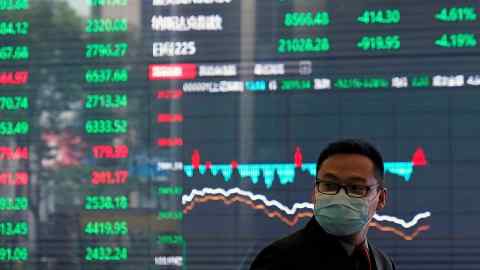 This matters for currency markets. Indeed, the flipside of China’s resilient balance of payments is the rise in the US trade deficit. If you strip out oil, the US trade deficit is near a new record high and has been increasing significantly in recent years. The US dollar has been weakening against Asian currencies in recent months. Expect this to continue.

There are costs to China’s outperformance, of course, and most of them are geopolitical. US-China tensions have been building for some time and the relative shifts in growth and balance of payments trends through the Covid crisis will probably raise tensions further.

In the near term, Beijing is well behind on its commitments under “phase 1” of the trade deal with the US. Through August, China has made less than 40 per cent of its purchases pledged for 2020. Soyabean imports from the US — one of the more visible elements of the trade deal — have been slowing this year, even as China’s overall soyabean imports have surged. Part of this is seasonal, but there is a lot of catching up to do by year-end.

Over the longer term, China’s trade surplus with the US has grown almost 25 per cent since the start of the Trump presidency, to more than $300bn on an annualised basis. For all the talk of “winning” against China, the reality is that the current US administration has done little to curb the multiyear trend of ever higher trade deficits. Doing so is harder than it looks.

In a tight US election season, these trends may prompt more hawkish rhetoric from the Trump administration. And further out, it does not really matter who wins in November. US-China tensions are here to stay and Beijing’s successful virus management — and consequent economic resilience — will only raise the stakes in the years to come.

The writer is global head of desk strategy at NatWest Markets