“The UK is on track to record the largest decline in gross domestic product for 300 years.” This fact, stated in the latest analysis of the UK’s long-term fiscal position by the Office for Budget Responsibility, has a clear implication, even though there remain huge uncertainties over the impact of Covid-19. In the absence of a miraculous recovery, the public finances will, yet again, deteriorate structurally, as they did after the financial crisis of 12 years ago. Rishi Sunak, chancellor of the exchequer, is spending freely now. When and how will we pay?

The fiscal implications of such a shock are enormous. Public sector net borrowing jumps from 2.6 per cent of GDP last year to 19 per cent this year — far and away the highest in peacetime. Roughly 40 per cent of this is explained by the impact of the collapse in output on revenue and spending, and the rest by direct Covid-19 support measures.

Yet, by historical standards, the UK’s public sector indebtedness will not be particularly high. After the second world war, the ratio was 250 per cent of GDP. Furthermore, debt service costs are very low. Provided this debt is financed at long maturities, at today’s low rates, this should be perfectly manageable, even if rates rise to less abnormal levels. 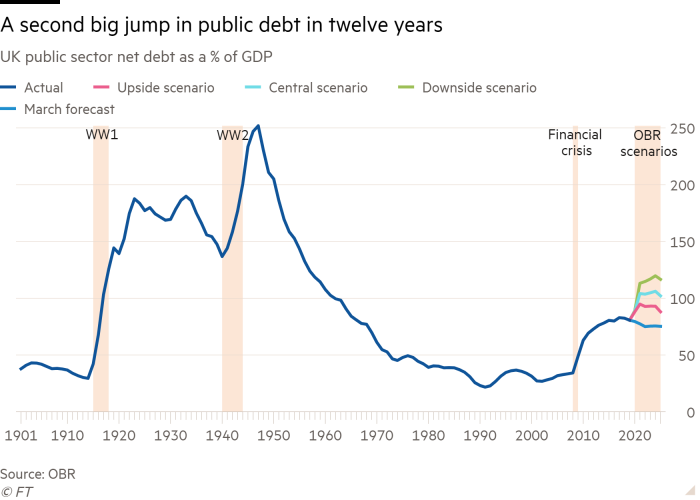 Nevertheless, this upward shift in indebtedness adds to already strong upward pressures on spending and debt over the long run. Evidently, long-term forecasts are worthless in themselves. The past 12 years have taught us that. But they clarify thought. In its March forecast, the OBR estimated that net debt would rise to close to 300 per cent of GDP under current policy over the next half century. Now it expects this to be more than 100 percentage points higher under its central scenario and more than 200 percentage points higher under its downside scenario.

Because anything like this will be unsustainable, it will not happen. But the question is what prevents it. Here there are benign scenarios and malign ones, with big choices along the way.

The most benign scenario would be the inverse of what happened after the 2008 financial crisis. Instead of a huge and permanent decline in the growth of productivity and output, there would be an increase. A necessary condition for achieving this is to eschew premature fiscal and monetary tightening, avoid a huge adverse Brexit shock, and promote investment and innovation in the public and private sectors. The most malign scenario will see not just output levels, but also growth rates, permanently depressed. In the long run, raising productivity growth is clearly essential. 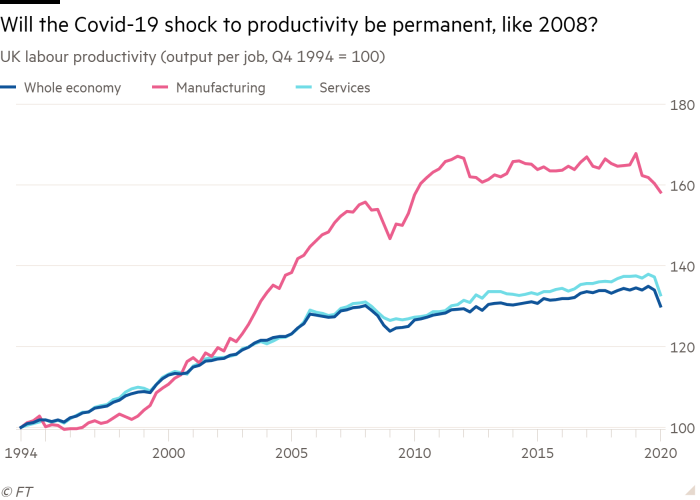 The big choices are likely to be fiscal. We have known for a long time from OBR analysis that higher taxes will be necessary if public finances are to be sustainable, given the pressures from an ageing population. The Covid-19 crisis just makes the starting point far worse, in terms of both debt and deficits.

In time, it will at least be necessary to bring the structural primary (before interest) current (excluding public investment) budget into balance. Furthermore, there will be strong pressure for higher spending, especially on health, social care, welfare and wages of low-paid public servants. Thus, it is likely that the ratio of spending to GDP will rise structurally. Thus taxes must also rise.

That is feasible. But it will create a political fight. According to the IMF, UK government revenue was 37 per cent of GDP. This was well below Canada on 40 per cent, the Netherlands on 44 per cent and Germany on 46 per cent. As the UK leaves the EU, it might find itself forced to get closer to the tax rates of some rich continental European countries.

Now that would be very ironic.