A technical glitch that meant nearly 16,000 cases of coronavirus went unreported has delayed efforts to trace contacts of people who tested positive.

Public Health England said 15,841 cases between 25 September and 2 October were left out of the UK daily case figures.

PHE said all those who tested positive had been informed. But it means others in close contact with them were not.

The issue has been resolved, PHE said, with outstanding cases passed on to tracers by 01:00 BST on Saturday.

The technical issue also means that the daily case totals reported on the government’s coronavirus dashboard over the past week have been lower than the true number.

BBC health editor Hugh Pym said daily figures for the end of the week were “actually nearer 11,000”, rather than the about 7,000 reported.

Labour has described the glitch as “shambolic”.

The BBC has been told by senior public health officials in the north-west of England that a significant proportion of the unreported cases are from the area.

Cities such as Liverpool and Manchester already have among the highest infection rates in the country, at about 10 times the national average.

BBC analysis found the number of cases reported for the week to 1 October increased by 92.6% in the north west after taking in the missing tests – with similar rises reflected across England.

The increase is mostly down to the missing tests, but the figures also included some results which came back after 2 October. 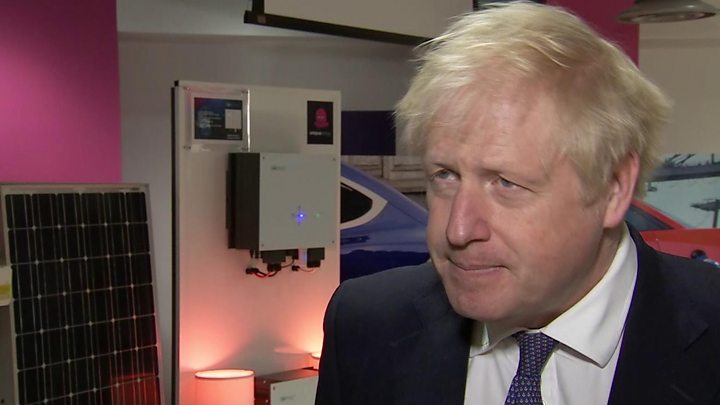 Media captionBoris Johnson: “I can’t give you those figures but all those people are being contacted”

Prime Minister Boris Johnson said the cases data had been “truncated” and “lost”, but added all people who had tested positive had been contacted and the tracers were “now working through all the contacts”.

Meanwhile, the head of the government’s vaccine taskforce, Kate Bingham, has told the Financial Times that less than half of the UK population could be vaccinated against coronavirus.

“There is going to be no vaccination of people under 18,” she said. “It’s an adult-only vaccine for people over 50, focusing on health workers, care home workers and the vulnerable.”

Mr Johnson has warned it could be “bumpy through to Christmas” and beyond as the UK deals with coronavirus.

Speaking to the BBC’s Andrew Marr on Sunday, the PM said there was “hope” of beating Covid, and called on the public to “act fearlessly but with common sense”.

In an interview with the Sun, Rishi Sunak has defended his Eat Out to Help Out scheme, saying he had “no regrets”, after suggestions it may have helped fuel the second wave of coronavirus cases.

At a time when the testing system has come under intense scrutiny after reports of delays and a system struggling to keep up with demand, the latest revelation could not have come at a more awkward moment for the government at Westminster.

Because the nearly 16,000 extra positive test results had been not entered into the test and trace system, their recent contacts were not immediately followed up.

Experts advise that ideally contacts should be tracked down within 48 hours.

Officials say the technical problem – thought to be IT related – has been resolved, with all the new cases added into totals reported over the weekend.

But all this will hardly improve public confidence in the testing system in England.

And it muddies the waters for policy makers and officials trying to track the spread of the virus at what the prime minister has called a “critical moment”.

On Sunday, the government’s coronavirus dashboard said that, as of 09:00 BST, there had been a further 22,961 lab-confirmed cases of coronavirus in the UK, bringing the total number of cases in the UK to 502,978.

Another 33 people were reported to have died within 28 days of testing positive for Covid-19 as of Sunday.

Public Health England’s interim chief executive Michael Brodie said a “technical issue” was identified overnight on Friday, 2 October in the process that transfers Covid-19 positive lab results into reporting dashboards. He said the majority of the unreported cases had occurred in the “most recent days”.

It was caused by some data files reporting positive test results exceeding the maximum file size.

“We fully understand the concern this may cause and further robust measures have been put in place as a result,” he said.

PHE said NHS Test and Trace have made sure there are enough contact tracers working, and are working with local teams to ensure they also have sufficient resources to be urgently able to contact all cases.

The number of call attempts is being increased from 10 to 15 over 96 hours.

There have been clear problems with the government’s Test and Trace data, but they do not change our view of the UK’s trajectory.

Cases surged at the beginning of September, they may still be climbing, but not as quickly as anticipated just a few weeks ago.

This perspective comes from three key sets of data – the Office for National Statistics, the React study by Imperial College London and the Covid symptom tracker app.

None are blighted by either the current issues with the Test and Trace data or by people struggling to access a test.

The real fallout of the weekend’s statistical chaos is not the numbers, but the people who should have been contact-traced, told to quarantine and instead may have been unwittingly passing on the virus.

Labour’s shadow health secretary Jonathan Ashworth said: “This is shambolic and people across the country will be understandably alarmed.”

He called for Health Secretary Matt Hancock to explain “what on earth has happened” and what he plans to do to fix test and trace.

Mr Hancock is due to update MPs about coronavirus on Monday afternoon.

Bridget Phillipson, shadow chief secretary to the treasury, told BBC Breakfast she wanted to know whether it had had “any impact on government decision making around local restrictions”.

PHE data shows Manchester now has the highest rate of infection in England, at 495.6 cases per 100,000 people in the week to 1 October, from 223.2 the week before. Liverpool has the second highest rate, up to 456.4 from 287.1 per 100,000. Knowsley in Merseyside, Newcastle, Nottingham, Leeds and Sheffield have also seen sharp rises.

News of the glitch in the daily count first emerged late on Saturday, when the UK announced more than 10,000 new coronavirus cases for the first time since mass testing began.

The government said the technical issue meant some cases during the week were not recorded at the time, so were included in Saturday’s data.

The daily total rose from 4,044 on Monday to a then-high of 7,143 on Tuesday. However, over the next four days the daily total remained stable at a time when continued increases might have been expected.

Then came the big leap in numbers – a far bigger day-on-day increase than at any time in the entire pandemic – which was announced on Saturday, five hours later than usual, and was accompanied by the government explanation.

Have you recently tested positive? Have you been contacted by test and trace? Share your experiences by emailing [email protected].

Please include a contact number if you are willing to speak to a BBC journalist. You can also get in touch in the following ways:

If you are reading this page and can’t see the form you will need to visit the mobile version of the BBC website to submit your question or comment or you can email us at [email protected]. Please include your name, age and location with any submission.