Good morning from Singapore where I have been conducting a highly unscientific survey of my family and friends’ purchases over recent months in an effort to understand the reasons underlying the surprisingly strong performance of China’s export sector, which in August recorded its highest year-on-year rise since March 2019. It is no surprise that China-based exporters should be doing better relative to the beginning of the year, as the world’s second-largest economy continues its impressive recovery from the coronavirus pandemic. After infections peaked in China in mid and late-February, President Xi Jinping’s administration successfully handled a series of localised outbreaks, all of which were contained before they could morph into a nationwide “second surge”.

But the highest monthly export surge since March 2019, when there was no such disruption last year? Today’s post examines the reasons for this, both within China and abroad. Our chart of the day looks at Chinese export strength, while our policy watch considers whether Xi and his counterpart in Germany, Angela Merkel, can pull off an ambitious investment agreement between China and the EU.

The printer, the trampoline and the Nintendo Switch

Ever since entering the workforce in 1994, I have been lucky — or unlucky depending on your perspective — to have lived within an easy, 15-minute commuting radius of my various offices in Hong Kong, Guangzhou, London, Beijing and Singapore. As a result, I have never felt the need to have a printer at home. If I needed to print something urgently at the weekend, it was easy enough to go into the office, or it could wait until Monday.

All that abruptly changed in early April, when Singapore’s eight-week lockdown went into effect to stop the community spread of coronavirus. Suddenly the FT’s Singapore office was off-limits to me, and suddenly I felt an urgent need to buy a Hewlett-Packard printer-scanner, as well as a proper-sized computer monitor that my laptop could connect to.

Only after China’s stronger-than-expected August export figures were announced did it occur to me to check where my new printer and monitor were manufactured. No prizes for guessing that both were “Made in China”. (It has not, however, been a clean sweep for China’s export juggernaut in my household. When I had to buy a new toner cartridge for our printer last weekend, I was pleasantly surprised to see it had been made by HP in Malaysia.)

More recently, a family friend found himself in far more desperate circumstances than my family during our April lockdown, when my wife and I had to juggle our two jobs and childcare duties for two young children in a relatively spacious three-bedroom flat. The friend, his wife and their two children had to endure a 14-day quarantine period in a Seoul hotel suite. Their survival purchases for the fortnight included a compact indoor trampoline for the kids and, in an even more exciting development for the young ones, a Nintendo Switch video game console.

Both the trampoline and Nintendo console were, of course, made in China.

Add to such impulse purchases similar ones by hundreds of millions of other lucky professionals around the world — all of whom can crack open a laptop computer at home and call it “work” — and suddenly you have a large, captive market for China’s export factories.

None of this would have been possible if not for the Chinese government’s successful virus containment efforts. China has kept its official case count at about 90,000 infections, or 0.006 per cent of its total population. In the US, by contrast, the official case count has reached 6.5m (or 2 per cent of the total population) with no plateau in sight.

Further fuel to the fire under China’s export sector has been provided by the unusual fiscal and monetary responses taken by other nations as a result of the pandemic.

In the wake of the global financial crisis, developed economies unleashed huge monetary stimulus through quantitative easing but were relatively constrained on the fiscal side. It was ultimately China’s fiscal stimulus at that time — estimated at about 15 per cent of gross domestic product — that buoyed global economic conditions, especially for commodities.

More than a decade later, the developed economies and China have reversed these roles. Developed countries — including Republican and Conservative-led governments in the US and UK — are showering their populations with “helicopter money”. Meanwhile, dissuaded in part by the debt overhang from its response to the financial crisis, the Chinese Communist party has done relatively little for its toiling masses.

“For the first time, the rest of the world has embraced huge fiscal stimulus,” one Chinese government adviser who prefers not to be named told Trade Secrets. “That leads to global demand for many of the things that China produces: work-from-home goods, consumer electronics and personal protective equipment.”

During the global financial crisis, he said, it was the Chinese investment boom and consequent demand for global commodities that put a floor under the global economy. As he said, compared with the situation now: “It’s such a contrast.”

A glance at the long-term relationship between Chinese export strength and global economic growth shows just how unusual the former is at the moment. During the global financial crisis, Chinese exports collapsed in tandem with the global economy, but there is no such synchronicity today. In fact, Oxford Economics is forecasting that Chinese exports will grow 2.7 per cent this year, despite the pandemic. 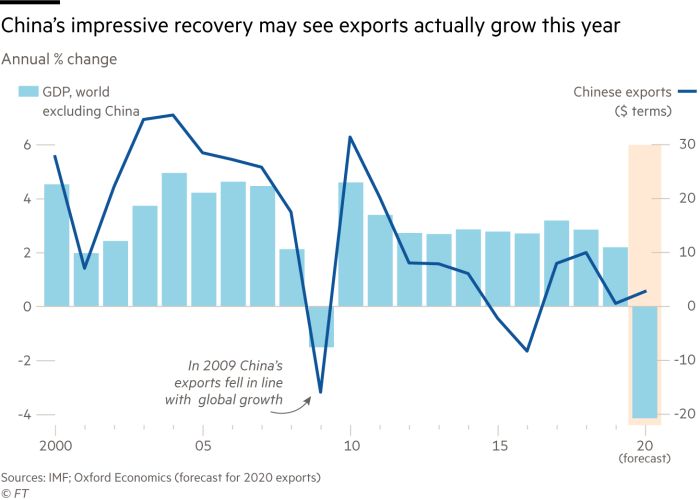 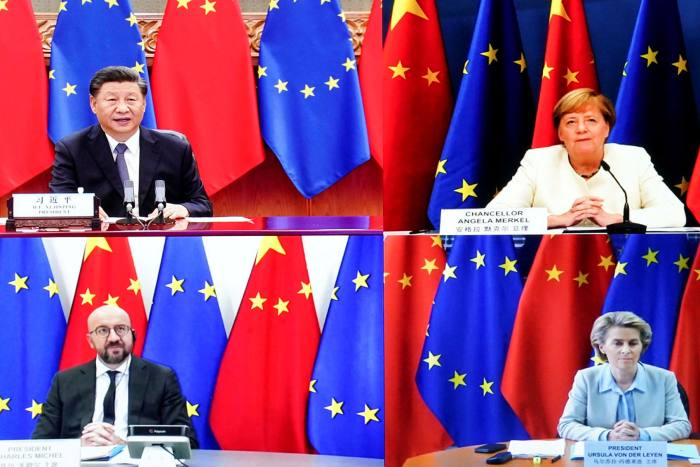 One sector that is not going to be recovering from the coronavirus pandemic anytime soon is global business and tourist travel. Long gone too are the days when the poshest hotels in global capitals could expect a steady stream of Chinese VIP guests. Hardly a week used to go by without one member of the Chinese Communist party’s seven-man politburo standing committee leading a large delegation of political colleagues and business executives on an expensive overseas junket. This week, it was supposed to be President Xi Jinping’s turn, meeting his EU counterparts in Germany. Instead, they chatted via video link on Monday.

But in the spirit of never wasting a good crisis, Monday’s virtual meeting could provide the final impetus for China and the EU to finally conclude their delayed Comprehensive Agreement on Investment. According to people briefed on the negotiations, the two sides have recently made progress on a number of key areas such as state subsidies for industry.

With any similar agreement between China and the US impossible given the downward spiral in relations between the world’s two largest economies, Beijing has only Brussels — and Germany’s outgoing chancellor, Angela Merkel — to look to for a globally meaningful trade deal. Here’s hoping that Xi and Merkel seize their chance.