China’s share of global exports has been hit by its trade dispute with the US which — together with the pandemic, corporate governance demands and the rise of artificial intelligence — is pushing multinational companies to reduce their dependency on the Asian powerhouse.

Last year Chinese exports of 1,200 products accounted for 22 per cent of the world’s exports, 3 percentage points down on the previous year, according to a new study by Baker McKenzie, the law firm, and Silk Road Associates, an economic consultancy. For consumer goods the country’s global market share fell by 4 percentage points to 42 per cent.

The findings come as Washington targets China with wide-ranging measures aimed at weaning itself off China-based supply chains and hobbling Beijing’s ambitions to become a global tech power.

On Monday, Washington broadened restrictions on semiconductor supplies to Huawei imposed earlier this year to cut off virtually all chip shipments to the Chinese technology group.

Anne Petterd, head of the international commercial and trade practice at Baker McKenzie in Asia Pacific, said that in the wake of the disruption caused by the pandemic, companies were looking to geographically diversify their supply chains, build in more safety layers, and supervise them more strictly.

“Whereas it used to be the consumer goods sector that had to make these fast moves, we are now seeing an unprecedented range of industries starting to do the same,” she said.

Companies that make technology hardware, one of the industries where manufacturing has been most concentrated in China, have moved production of some products out of China over the past three years as their customers in the US began raising concerns over security and as some components were hit by US tariffs under the China trade dispute.

For example Quanta Computer, the world’s largest notebook contract manufacturer and a big supplier of cloud hardware for companies such as Google, Amazon and Facebook, shifted production of servers out of China to Taiwan and to the US.

Reflecting these moves, the data assembled by Silk Road Associates show that China’s share of worldwide exports of computers and tablets dropped by 4 percentage points to 45 per cent last year.

In the handset industry, where China is even more dominant, the country’s share slid by 3 percentage points to 54 per cent, according to the study.

Liu Young-way, chairman of Foxconn, the largest Apple supplier and the world’s largest electronic contract manufacturer with a workforce of up to 1m in China, said last week that the company expected global technology supply chains to split into two camps: “It will be one for China and those associated with it, and another for the US and their friends.” 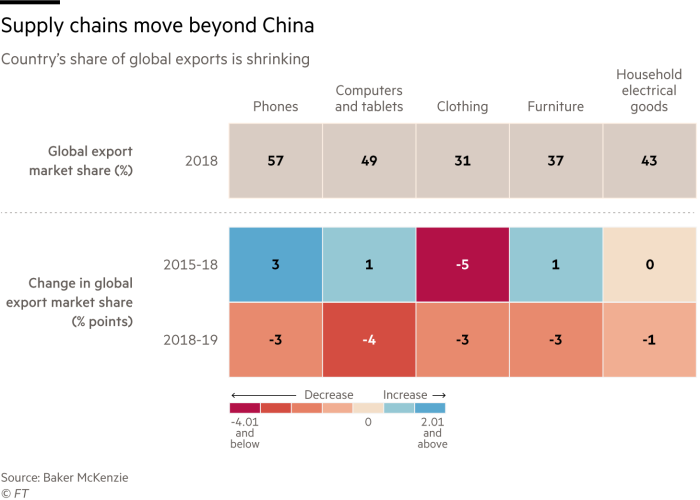 While Foxconn is building capacity in Vietnam and India, it has said that it aims to increase the proportion of capacity outside China in its global shipments only marginally from the current 20 per cent to 30 per cent.

But the study’s authors believe that the pandemic, and the disruption it brought to global supply chains centred on China, is accelerating the changes.

“What we have seen so far has been a shift in the final assembly of the product, with a lot of the components still coming out of China,” said Ben Simpfendorfer, chief executive of Silk Road Associates. “The supply chain as it was built in China over the past 20 years will be replicated — but it needs time.”