Greetings from Tokyo, where the impending departure of Prime Minister Shinzo Abe has put most areas of public policy on hold. With the politicians off fighting a leadership contest — which will almost certainly be won by chief cabinet secretary Yoshihide Suga — the bureaucrats are enjoying a few weeks of peace and quiet.

Suga is running as a continuation of the Abe administration, and that will apply to trade as well, where the priority is to conclude two important deals by the end of the year: the Regional Comprehensive Economic Partnership in Asia, and a post-Brexit agreement with the UK. Today’s main story looks at the remaining snags in the UK talks, which show why trade deals are seldom done rapidly. Our policy watch notes a warning yesterday from Donald Trump about decoupling the US economy from China, while our chart of the day looks at UK imports from the EU.

A quick deal, or a meaningful one?

The plan for UK-Japan trade talks was straightforward: take most of the content of the existing EU-Japan agreement, forget agricultural quotas, add investment and digital chapters, spice the mixture with some UK tariff cuts, drive the negotiations through as fast as possible and have it all take effect on January 1 2021. Since everybody wants continuity, and all controversial areas were off the agenda, the speedy timeframe seemed achievable.

Japan initially set the UK a deadline of July 31 to reach an agreement. In early August, Japanese foreign minister Toshimitsu Motegi flew to London to meet UK trade secretary Liz Truss. The two ministers said they had reached “substantial agreement” and aimed to conclude a deal by the end of the month. But that deadline, too, has been and gone.

The remaining issue, according to officials on both sides of the talks, is cheese. The UK wants a quota to export cheese, including its Stilton, to Japan. The trouble is that requires a new and painful concession from Tokyo, which disrupts the entire calculus of quick talks. Everybody involved still believes a deal will be reached, because the political will is strong on both sides, but at this stage nobody quite knows how.

To outside observers, tariff rate quotas on agriculture always looked like the big problem to a quick replication of the EU-Japan deal for the UK. After years of negotiation, the EU eventually won the right to export 20,000 tonnes of cheese (rising to 31,000 tonnes by 2035), at a reduced tariff. There are similar quotas for other sensitive goods such as barley. If Japan imports more than the quota from the EU, then those extra imports pay the full tariff rate.

From Tokyo’s point of view, any new quota for the UK will increase the total allocation available to importers competing with its farmers. But from London’s point of view, a deal without agricultural quotas will leave it in a manifestly worse position than it was before Brexit. In 2019, the UK exported 446 tonnes of cheese worth just £2.2m to Japan. But the value is in the potential for growth, especially at the luxury end of the market. Japan went into the talks promising farmers there would be no new quotas; the UK promised its public that Brexit would mean better trade deals, not worse. It is not an easy issue to finesse.

One solution, floated in the Nikkei newspaper, is a complicated rebate system: there would be no quota for UK cheese, but a partial tariff rebate if annual imports are below a certain level. However, that would be unsatisfactory for everybody, and negotiators on both sides play down the idea. Another possibility is to compensate elsewhere in the deal, with more generous reductions in UK tariffs on industrial goods in return for a cheese quota. However, Tokyo has not laid the domestic groundwork for concessions on agriculture, and with a possible general election under a new prime minister in prospect, now is a bad moment to start.

That leaves some kind of political compromise, perhaps with a minimal quota for cosmetic purposes, plus a promise to revisit the issue in talks for the UK to join the Trans-Pacific Partnership trade deal. London would have to point to the digital and investment chapters and claim victory, ignoring the fact that both were Japanese priorities. For Truss, it would be a tough sell.

It all goes to show why trade deals normally take time. Negotiating is usually the final stage after painstaking domestic work to win political space for concessions. As the post-Brexit UK prepares to talk with more countries, it will have to decide what kind of trade deals it wants: quick or meaningful.

Tensions between the UK and the EU are high right now as Brussels’ chief Brexit negotiator Michel Barnier arrives in London for fresh talks in the wake of the FT’s scoop yesterday that the UK government was planning to make changes to the withdrawal agreement it passed in January. UK imports from the EU are well below typical levels this year but a no-deal Brexit could see further stockpiling, coinciding with what is normally an annual peak for imports in October and November. 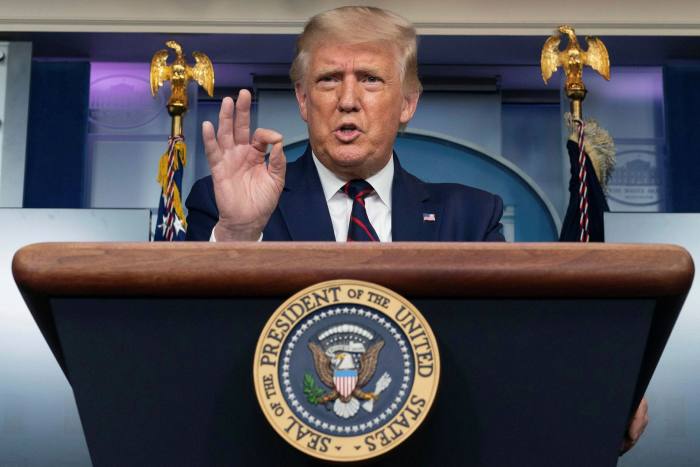 Donald Trump: ‘If we didn’t do business with (China), we wouldn’t lose billions of dollars’ © Chris Kleponis/POOL/EPA/Shutterstock

US president Donald Trump has raised the prospect of “decoupling” the US economy from China, claiming that America was experiencing “the fastest recovery in US history” as he hones his economic messaging in the final stretch of his campaign for re-election, writes Brendan Greeley.

Trump, who made China a central focus of his 2016 campaign, previewed a tougher line on trade with Beijing in a press conference held in front of the White House on the Labor Day holiday, with less than two months to go before the election on November 3. He said that “decouple” — which economists have used for a decade to refer to a potential permanent drop in trade between the two countries — was “an interesting word”.

The president also threatened to block companies that outsource jobs to China from receiving federal contracts, and vowed — as he did during the 2016 campaign — to bring manufacturing jobs and crucial supply chains back to the US.