Brussels has rebuffed changes to the UK government’s controversial plan to override last year’s Brexit deal, saying the compromise with Conservative MPs did not address the EU’s objections and would still leave Britain in violation of international law.

Boris Johnson’s government on Thursday published details of adjustments it had agreed with disgruntled backbenchers to secure parliamentary approval for its internal market bill, which would empower the UK to rewrite parts of the Northern Ireland protocol negotiated last year to prevent a hard border on the island of Ireland.

Mr Johnson agreed that MPs should have a vote to approve the use of ministerial override powers contained in the bill, and that the government would have to prove that the EU was “engaged in a material breach of its duties of good faith, thereby undermining the fundamental purpose of the NI protocol” for the powers to be enacted.

But at a closed-door briefing in Brussels on Friday, European Commission officials and EU in-house lawyers confirmed to member states that the bloc’s fundamental objections to the bill had not been addressed.

According to one official present at the meeting, Brussels was clear that “the bill is unchanged and still illegal”.

The EU’s rejection of the new measures reflects the view in Brussels that Mr Johnson has prioritised calming domestic discord over the bill over patching up relations with the bloc.

Specific concerns highlighted at the meeting included the fact that the bill would still allow the UK to violate last year’s delicately-agreed compromise on Northern Ireland if the British government unilaterally decided that the EU was not living up to its side of the bargain.

This would break with the approach of the EU-UK Brexit treaty, which provides for disputes to be settled through arbitration rather than by judgments on the part of one side or the other.

The UK government’s announcement that it would also use arbitration in parallel with its own measures — a key concession offered to MPs worried about Britain violating international law — did not assuage Brussels’ concerns.

“Everyone agrees the objections are unchanged,” the official said.

Ursula von der Leyen, commission president, told the FT this week that Brussels would continue to negotiate a trade deal with the UK, but warned that the dispute over the internal market bill would have to be resolved before any agreement could be ratified.

Outrage over the bill has masked some glimpses of progress in the trade negotiations over the past two weeks. 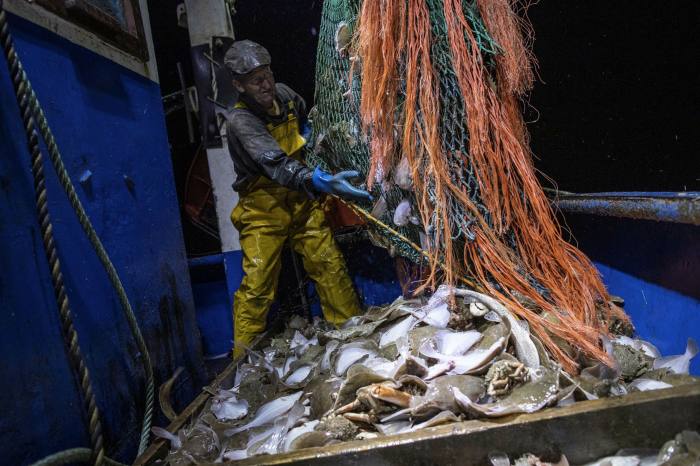 Despite the furore over British legislation, there have been tentative signs of UK flexibility on the acrimonious issue of access to fishing waters © Dan Kitwood/Getty Images

David Frost, the UK’s chief Brexit negotiator, was in Brussels on Friday for talks with his EU counterpart Michel Barnier. Further discussions are planned next week, with a formal negotiating round at the end of the month.

There has been some progress on issues around customs policy and value added tax. There are also tentative signs of UK flexibility on the acrimonious issue of access to British fishing waters.

Negotiators have broached the idea of a phase-in period of a number of years during which the bloc’s catching rights would decline. They have also touched upon different criteria that could be used to divide shares of the more than 70 species that straddle EU and UK territorial waters.

But according to one diplomat, the commission confirmed at Friday’s meeting that UK proposals on fish remained far from the EU position.