EU-UK trade talks have survived a rocky September, capped by outrage in Europe over moves by the UK prime minister Boris Johnson to violate last year’s Brexit deal. But hard yards lie ahead if they are to succeed.

At stake in the negotiating round in Brussels, due to wind up on Friday, is whether enough progress can be made to shift the talks into an intensified and tightly controlled format, referred to by the EU’s chief Brexit negotiator Michel Barnier as “the submarine”.

The approach would allow senior officials on both sides to hunker down in an effort to hammer out compromises on the most unyielding disagreements. But getting to that point is not simple: wary of finding itself under pressure to give ground on core priorities, the EU wants to be sure that there is a shared understanding of the destination before moving to the next phase.

As one senior member of Mr Barnier’s team put it in a meeting with EU diplomats on Monday: “We cannot enter the submarine when our doors and windows are not yet leak proof.”

Here, the FT considers the main sticking points to a deal:

A totemic issue that has hampered negotiations from the start. The EU is adamant it will not grant the UK a meaningful trade deal unless it has guarantees its companies will not face unfair competition; Britain insists that this is a sovereign matter.

The crux of the disagreement is in the area of state aid, where the EU is seeking to write commitments on limiting subsidies into the legal text of the trade agreement.

Talks have been marginally smoothed by a UK government statement in September that it “does not intend to return to the 1970s approach of trying to run the economy or bailing out unsustainable companies”. The statement also confirmed that “the UK will adhere to any international obligations on subsidies agreed under future free trade agreements”.

Other level playing field matters covering issues such as environmental standards and labour law are also not settled, with France urging the European Commission to seek arrangements that would keep both sides broadly aligned.

Bound up with the level playing field is the question of how to enforce commitments outlined in the future relationship deal. The EU wants to move far beyond normal World Trade Organization dispute-settlement arrangements, with possibilities for rapid retaliation if it finds evidence the UK is trying to steal a competitive advantage, or is violating the partnership in other ways.

In general, it wants to have free rein to hit Britain where it economically hurts: hiking tariffs on UK farm exports, for example, in retaliation for Britain not honouring promises on fishing rights.

The UK has sought to limit this potential for “cross-retaliation”, and this whole area remains one of the most difficult in the talks. 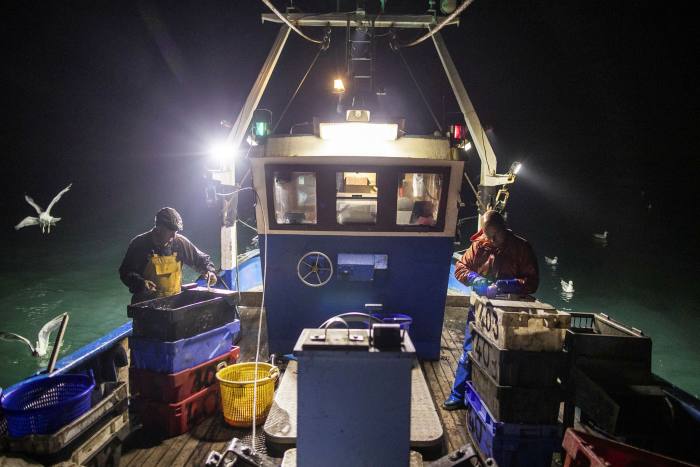 Undoubtedly the strongest card that Britain holds in the negotiations is the EU fishing sector’s urgent need to preserve access to UK waters after January 1, when the Brexit transition period ends.

Without a deal, the EU fleet will be largely locked out of the UK’s “exclusive economic zone”, which stretches as far as 200 nautical miles from the coast of Britain.

The heart of the negotiation is about access to British waters and fishing rights for the more than 70 species that straddle the EU-UK maritime border. Mr Johnson has made clear to EU chiefs that a deal will only be possible if he can show a clear Brexit dividend for the UK fishing sector; the EU insists that its fishermen will not be sacrificed.

Potential compromise ideas are being explored in the talks including that the EU share of the catch could decline over time. Ultimately, the key issue is whether the two sides can hammer out an agreement on long-term catching rights, species by species, that everyone can live with.

Both sides stress the importance of continuing co-operation in the fight against organised crime and terrorism, but this has not prevented talks getting seriously bogged down.

A big chunk of the problem is what to do about data. Britain will inevitably lose access to some EU law enforcement databases when its transition period ends. But the future relationship deal will determine whether key information such as fingerprints and DNA can continue to be exchanged.

One source of disagreement is the EU’s insistence that the only legal route to preserve that data sharing is for it to grant the UK an “adequacy decision” confirming that Britain’s privacy standards are as robust as the EU’s own. But this would unravel if the UK ever diverged from EU data-sharing rules.

The talks have been further complicated by a ruling from the European Court of Justice in July that invalidated an EU-US deal on data transfers. Brussels fears the ruling will make it more complicated to do a deal with the UK on sharing airline passenger data, known as PNR: a prized tool for law enforcement agencies.

Trade in goods and services One of the curious aspects of the EU-UK talks is that, in areas that would form much of the substance of a deal, negotiations have actually been comparatively smooth, with both sides aiming for tariff-free, quota-free trade.

Most problems have revolved around Brussels railing against what it sees as attempted cherry-picking by the UK of the benefits of the bloc’s single market — such as extensive continued rights for lawyers, accountants and other professionals to offer their services across the EU. But those kinds of aspirations have moderated over time.

Similarly, David Frost, the UK’s chief Brexit negotiator, has admitted defeat to the UK car sector in his attempt to secure generous “rules of origin” commitments that would allow the export of British cars to the EU market tariff-free even if they were largely made of components sourced from countries outside the UK and EU.

But the EU rejection of British positions has prompted occasional barbs from Lord Frost and his team that Brussels is offering only a “relatively low quality” agreement — something Brussels has contested.

Brussels has rebuffed UK attempts to address future market access for the City of London in a trade agreement, insisting instead that relations in this area will depend on Brussels taking unilateral decisions — known as equivalence.

That process has moved slowly, with Brussels making clear it wants to see less European reliance on crucial market infrastructure in London, and that prized pan-EU access rights for UK investment firms are off the table for the time being.