Hello from Brussels. The suspense has been unbearable, but this week we get the first-round results in the selection of director-general of the World Trade Organization, in which three of the eight candidates are eliminated. Yesterday we interviewed Yoo Myung-hee, the Korean candidate, whose pitch was that being a trade minister during the Covid-19 pandemic itself was a big plus: a good point but probably not a decisive one for most.

On the bright side there seems to be a general consensus among trade folks that the US, rather than being disruptive or using the DG process as leverage for trying to force change elsewhere, is so far participating quite constructively. It’s not clear if that will continue. The timing is intriguing. In theory, the final selection is made just days before the US presidential election in November. Insofar as voters in Ohio actually care, it might not be the wisest move for Donald Trump to confirm the new head of a globalist organisation shortly ahead of polling. Look for at least a short delay.

Below we have a look at what we know about the first round of the DG race. Then we’ll turn our attention to the comedy of errors (wry black humour rather than thigh-slapping vaudeville, to be honest) when governments make preferential deals that end up contradicting each other. Predictably, one of them involves Brexit. Today’s Tit for tat guest is Suman Bery, non-resident fellow of Brussels think-tank Bruegel, while our chart of the day looks at trade tensions over rare earths.

The WTO starts narrowing it down

Predicting anything in the WTO DG race is a risky game, given the organisation’s deep political fissures and the peculiar results that might be thrown up. But with regard to the first-round results, the general view is that the odds haven’t changed much since nominations closed in July. The two clear favourites, Amina Mohamed and Ngozi Okonjo-Iweala, are highly likely to get through. Yoo Myung-hee is probably going to join them. The Saudi, Mohammad Maziad Al-Tuwaijri, and the Moldovan, Tudor Ulianovschi, are the most likely to be eliminated.

In the middle pack it remains unclear. There was a boost for Hamid Mamdouh, the Egyptian former negotiator, on Friday. He edged out Jesús Seade Kuri, the Mexican, when the EU member states collectively decided on their slate of four, joining the three above-mentioned female candidates. Mamdouh’s personal qualities and connections overcame support from Spain for Seade and, perhaps amazingly, affection in other quarters for Britain’s Liam Fox.

Amusingly, back in the days when the then EU trade commissioner Phil Hogan was still a DG hopeful, the European Commission said it wanted a WTO head from a developed country. The UK still fits that description for the moment. But backing a Brit shortly after the UK unilaterally abrogated an international treaty by threatening to rip up the Brexit withdrawal agreement probably isn’t what the EU had in mind.

Speaking of which, there are a couple of examples kicking about of the tangle governments can get into by signing contradictory preferential deals, and naturally Brexit provides one of them. The big sticking point in the UK-EU withdrawal talks is state aid, with the UK’s nominally Conservative government apparently wanting to tool up a home-made British Gosplan for the tech economy.

Britain’s negotiating stance for the trade deal with the EU is hence no constraints on subsidies ever, let alone acceding to Brussels’s demand that the UK remain within the strictures of the EU’s state aid rules. Unfortunately for Boris Johnson’s government, as we revealed yesterday, that position is rather undermined by the UK’s new preferential deal with Japan, which has prohibitions on endless government bailouts for failing companies. True, the rules in the Japan agreement (ironically copied and pasted from the EU-Japan bilateral that went into force last year) are way short of the EU’s internal state aid regime, but it does make the UK look a bit silly.

It turns out that being Global Britain makes it harder to be rude to the neighbours. Another example of the phenomenon is the renewed threat from the US Congress to veto any UK-US bilateral that jeopardises peace in Northern Ireland.

The other failed entry in the Joined-Up Trade Policy Awards goes to China. Today, at an otherwise probably rather pointless EU-China summit, Beijing will confirm an agreement with the EU first made in November last year to respect geographical indications (GIs), ie: protected food names. There’s a slight problem here in that China subsequently signed the “phase-one” deal with the US, which hates GIs, to say they wouldn’t recognise any new said protection.

We were uncertain for a while as to which pledge China would honour. But as an old Brussels hand said to us: if Xi Jinping is photographed signing a draft deal with the EU, he’s probably going to follow through and agree the final version. Donald Trump won’t be happy. But when is he ever anyway?

That’s the thing. If you’re China you’re free to break promises (and to block imports to inflict political punishment) with greater impunity than if you’re the size of the UK. It’s small economies such as Britain that really need comprehensive binding multilateral rules overseen by a dynamic and effective organisation. They had better hope the WTO gets a good DG. It’s still not likely to be Liam Fox though.

As relations between Washington and Beijing deteriorate further, the US government is supporting the resurrection of the Mountain Pass mine in California’s Mojave desert, which until the 1980s was the world’s biggest producer of rare earths, writes Jamie Smyth. Disruption to supply chains during the Covid-19 pandemic has underscored the need for the US and other nations to ensure they are not reliant on a single country or company for vital supplies of raw materials and goods. 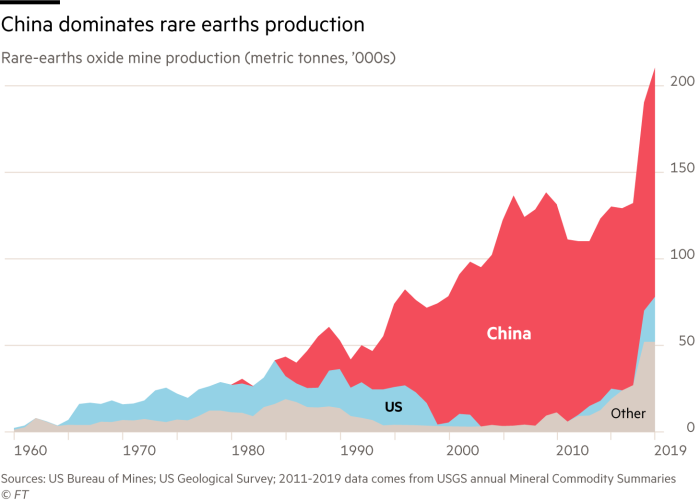 Do you think the WTO’s appellate body will ever be restored to its former self?

Unlikely, if that means US participation. A more likely outcome is a dispute resolution initiative outside the WTO, accepted by a coalition of the willing, led by the EU and including Japan and China. Quite possibly the two could co-exist. But that is not the same as being restored to its former self.

What would it take for India to consider rejoining RCEP?

First, a much stronger domestic economy, which is at least two years away. Second, generous market access for its services exports to all members. Third, protection for its dairy sector. There is little likelihood that India will be part of the initial deal even if the door remains open, largely because of China’s presence. Exploring CPTPP (as the UK is apparently now doing) may be more realistic given Japan’s leadership and the possibility of US accession after the presidential election in November.

What do you make of US speaker Nancy Pelosi’s warning to the UK that a US/UK trade deal would never pass if Boris Johnson undermines the Good Friday Agreement with Northern Ireland? Should the UK be worried about this?

I am sure Pelosi means what she says, but also that it ain’t over till it’s over, by which I mean the negotiations with Brussels. So far, the UK’s internal market bill is just that: a bill. The negotiation with the EU is both much more urgent and arguably more consequential than a possible future deal with the US.