Hello from Brussels. In an arid summer diary for trade news, one date sticks out: August 12, when the US will announce if and by how much it’s going to clobber the EU with more tariffs, these ones authorised by the World Trade Organization, because of illicit subsidies to Airbus.

Last week Airbus tried to get ahead of this by claiming that it no longer took the handouts and hence had complied with the WTO ruling. “About time, too” was a reaction from many, including David O’Sullivan, the illustrious former head of the EU’s trade directorate and, subsequently, ambassador to Washington. Is this going to persuade the Americans to drop the tariffs and start negotiating a new EU-US deal on government support to aircraft manufacture? Highly unlikely until the EU gets its own WTO authorisation to hit imports from the US with tariffs, on this occasion because of subsidies to Boeing, Airbus’s big rival. The judgment is likely to come in September.

Along with Airbus-Boeing, another long-running dispute we occasionally drop in on is Brexit. Today’s main piece is about the UK finding itself squeezed between the EU and US while trying to negotiate with the two simultaneously. Our Tit-for-Tat guest is Natalie Blyth, global head of trade and receivables finance at HSBC, while our chart of the day looks at how sharp increases in US coronavirus cases and flare-ups around the world have fuelled the gold price.

UK trade secretary Liz Truss. Britain’s idea of using US negotiations to put pressure on the EU by threatening to get superior UK access to the American market was always improbable © Andrew Parsons/10 Downing Street/AFP/Getty

We haven’t commented that much on Brexit issues and the EU-UK talks recently, since watching an unchanging cast of characters walking round and round in small circles isn’t really our idea of fun.

But there’s one entertaining related recent development — the Financial Times reporting that the UK has given up on a trade deal with the US this year. As one, Britain’s community of trade experts rises to say “TOLD YOU SO”. The government’s idea of using US negotiations to put pressure on the EU by threatening to get superior UK access to the American market was always improbable. Notwithstanding a weak attempt last week by trade secretary Liz Truss to claim that the estimated benefits from bilateral trade deals had been underestimated, the commendably honest calculations from her department’s economists show modest gains.

Contrary to its cunning plan, Britain isn’t playing the EU off against the US. It’s being squeezed between two different systems of regulation and governance and having to make unpleasant decisions. This isn’t just true for the well-established stuff about chemical-washed chicken, but also for digital issues such as data flow and 5G.

The UK has intimated it’s a world leader and can leave the poor old analogue EU behind. In reality, it’s still being influenced by others. The US is making no secret of its efforts to pull the UK into the American tech sphere of influence. First it bounced Britain into pushing Huawei out of its 5G network. Now it’s trying to intimidate it out of imposing a digital services tax of the kind the UK, along with many European countries, wants.

Another, subtler, case in point is the transfer of personal data. The UK, due to leave the EU’s data protection regime as of the end of this year, hopes to get an “adequacy” finding whereby the EU reckons British privacy safeguards are good enough to allow transfers between the two to continue. At the same time, the US is pushing the UK for binding provisions in its bilateral trade deal to allow data to flow freely between the UK and the US with narrowly defined exceptions, an approach at odds with the EU’s more regulated approach. 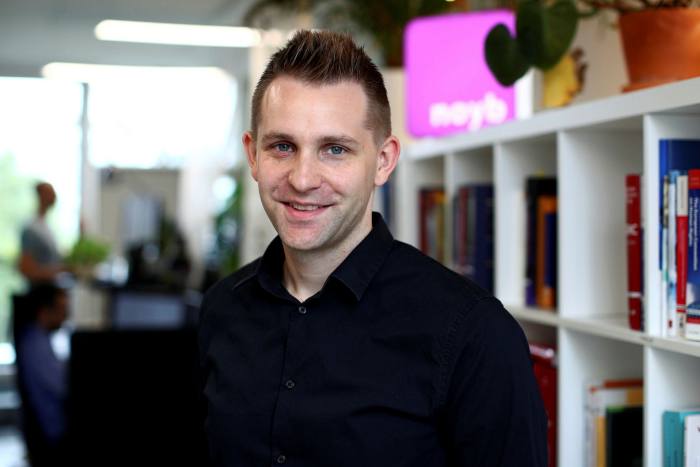 The “Schrems II” decision by the European Court of Justice on July 16, invalidating the Privacy Shield data-sharing arrangements between the EU and the US, has now complicated this. By itself it isn’t catastrophic for EU-US data flows. The ruling struck down the government-to-government agreement but upheld the use of “standard contractual clauses” (SCCs) at a company-to-company level which permit the continued transfer of personal data. The UK can carry on using these standard clauses with the US until EU law ceases to apply in Britain at the end of the year. Indeed, the UK has said it will then also sign its own version of the Privacy Shield with the US from next year, since the ECJ ruling will not apply in Britain.

However, the ruling could complicate the UK’s quest to get an adequacy finding from the EU. It’s perfectly possible to be recognised as adequate by the EU and simultaneously agree binding data flow clauses with other countries in preferential trade agreements. Japan does, for example, through relatively strong data flow commitments in the Comprehensive and Progressive Agreement for Trans-Pacific Partnership (though that doesn’t include the US), and weaker versions in the Apec agreement (which does). But as it did with Japan, the EU is likely to insist on cumbersome extra safeguards to control data transferred to the UK being sent on to the US or other more laissez-faire regimes. And given that Privacy Shield has been invalidated by the ECJ, it’s unlikely to consider a UK-US Privacy Shield II to be sufficient protection.

If the UK is struggling to get an adequacy decision it will have to implement tightly drawn SCCs. The process is likely to involve lots of lawyers, expensive ones at that. And all the time the UK will be under pressure from the US to make the process of data transfer easier, not harder. Impossible to manage? No. Politically and technically tricky? Yes. Expensive? Probably. It’s more evidence of the UK’s difficulties in forging its own way in the global trading system, and particularly the quixotic idea of getting a good deal from one of the trade behemoths by threatening to ally with the other.

Gold soared to an all-time high and the dollar weakened to a multiyear low as sharp increases in US coronavirus cases and flare-ups around the world weighed on investor confidence. The price of the precious metal, which investors typically view as a haven in times of uncertainty, climbed as much as 2.2 per cent to a record $1,944.71 a troy ounce on Monday. Its value has jumped by more than a quarter this year, making it one of the best-performing asset classes. 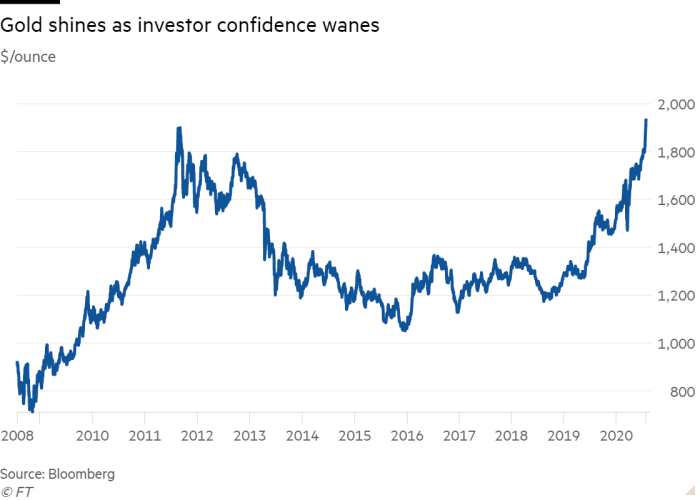 How far is the supply/demand dislocation we saw at the start of the pandemic improving, and where are the pockets, whether by sector or geography, where it’s still struggling?

Driven by domestic and intraregional activity, Asia is now opening up. A V-shaped recovery is clearly emerging, notwithstanding subsequent waves. Elsewhere, it’s still too early to tell and is dependent on western demand.

We’re seeing a sector asymmetry: tech and healthcare are up, while travel, retail and hospitality are down. Also seeing some business models being challenged, including stripping out middlemen.

Overall, trade has performed better than many worst-case scenarios supported by speedy government and bank intervention. However, the question remains, what happens if and when government intervention pulls back?

What are you seeing corporations doing about their supply chains — there’s been talk of reshoring, of snapping up key suppliers — to make them more robust and pandemic-proof in the future?

Firms are going deeper into their supply chains, beyond their immediate suppliers, to identify vulnerabilities and ensure there’s no single point of failure. Our latest Trade Navigator research reveals extraordinary collaboration between companies, which has proved key to survival for many. Such collaboration will be critical for producing a vaccine.

Some supply chains are diversifying and reshaping to de-risk. Our research indicates that claims of mass reshoring are overstated. We are seeing evidence of both vertical and horizontal integration and a focus on sustainable solutions to achieve greater transparency and control.

What has the role of trade finance been during the pandemic — is there anything you will continue to do differently in the future or the new normal?

Throughout this crisis, trade finance has kept trade moving, ensuring money gets to where it’s needed — and when.

At the outset trade finance injected liquidity earlier in the working capital cycle. Then it helped firms mitigate risk when seeking out new trading partners. And for some, such as cloud service providers, it’s facilitated meeting the sharp growth in demand.

It’s imperative that the acceleration of digitisation and a focus on sustainability continues. To ensure trade drives the economic recovery and bridges the trade finance gap, governments need to implement legislation to enable digital trade and re-examine the capital treatment for trade finance. The B20 trade and investment task force has put these issues firmly on its agenda. 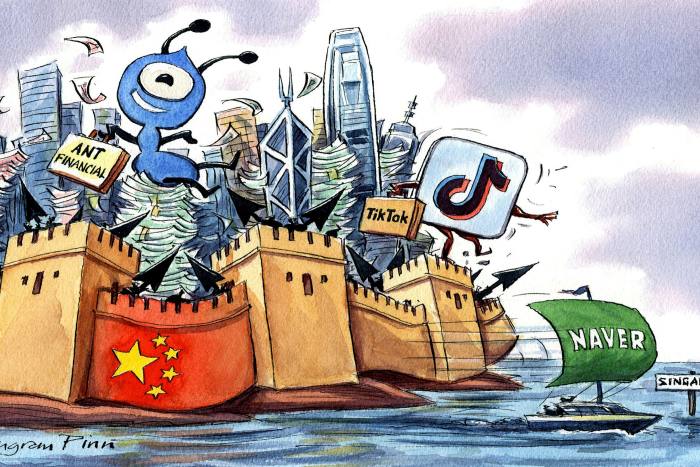