Developing countries should take on new debt to help them fight the economic impact of the coronavirus pandemic — but they will later suffer an unprecedented wave of debt crises and restructurings, World Bank chief economist Carmen Reinhart has warned.

The former Harvard University professor is best known for her work with fellow economist Kenneth Rogoff on the economic damage inflicted by financial crises throughout history, which was especially relevant during the great recession of 2008-09. But their work on the risks of high debt levels has been attacked for fuelling governments’ austerity policies in the following decade.

Ms Reinhart, who became chief economist at the World Bank this year, told the Financial Times in an interview that additional government borrowing was justified in the current circumstances.

“While the disease is raging, what else are you going to do?” she said. “First you worry about fighting the war, then you figure out how to pay for it.”

But Ms Reinhart has long argued that developing economies have a lower tolerance for debt than advanced economies. The impact of the pandemic will only exacerbate that problem, she said.

“Ken Rogoff and I wrote about debt intolerance in emerging markets 20 years ago,” Ms Reinhart added. “The level of debt that historically gets them into trouble is much lower.”

Fragilities are brewing and (emerging nations’) governments will capitalise their banks and take them over, and that is already in the making

Ms Reinhart spoke as the World Bank and IMF prepare for their joint annual meetings, which will be held online next week.

How to deal with the sharp rise in government indebtedness during the pandemic — caused by falling output and rising public spending — will be one of the hottest topics of discussion.

The G20 group of leading nations is widely expected to announce soon that it will extend its moratorium on official bilateral loan repayments for the world’s poorest countries, but there is a growing clamour among borrowers, economists and multilateral institutions for further action.

The pandemic and its economic impact present a crisis with no historic precedent, Ms Reinhart said. “In terms of the coverage, of which countries will be engulfed, we are at levels not seen even in the 1930s. This is why we are talking about debt write-offs. At the country level, at the multilateral level, at the G7 level, who has the financing to fill in all the big fiscal gaps that have been created or exacerbated by the pandemic?”

Ms Reinhart said the difficulty of assessing the scale of the debt crisis ahead was exacerbated by a lack of transparency in lending outside public bond markets, especially in official lending between countries.

China’s recent emergence as a significant source of credit to many emerging economies, and its unwillingness to disclose its lending, was a complicating factor, she said.

“Transparency has been a sensitive issue for some time,” Ms Reinhart added, citing in particular the fact that “many loan contracts have non-disclosure agreements so they are not known about”.

The fact that a lot of debt owed by governments and corporations in developing countries is denominated in foreign currencies such as the US dollar exacerbates the problem, she warned. “If you have a shock that affects your ability to get foreign exchange, you can’t pay.” 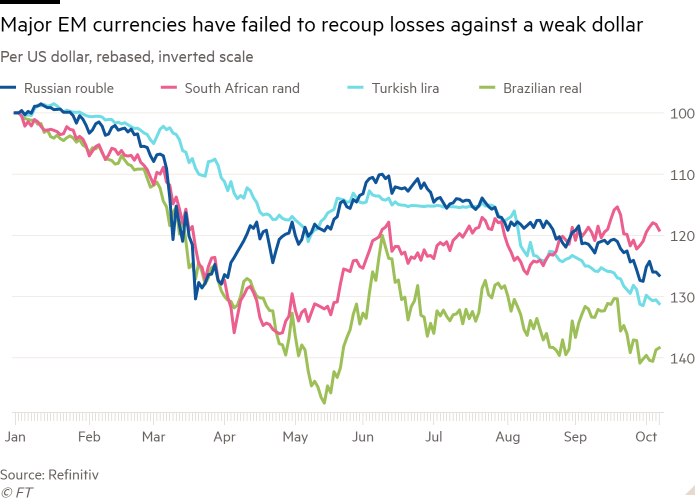 Several large emerging economies’ currencies have depreciated sharply against the dollar during the pandemic — even though the US currency has weakened against those of its main trading partners — as foreign investors have become strong net sellers of emerging market stocks and bonds.

Even before they began borrowing heavily to finance their response to the crisis, governments and corporations in emerging economies faced a surge in dollar-denominated bond redemptions from next year, according to the Institute of International Finance.

Much of the build-up of debt in emerging economies in recent years has been in the corporate sector rather than in government debt, according to the IIF. Debts owed by non-financial companies in the 30 largest emerging markets rose to 96 per cent of gross domestic product in the first quarter of this year, more than the amount of corporate debt in advanced economies, at 94 per cent of GDP, according to the IIF. “You’ve already seen it in the efforts of governments to support their national champions,” she said. “Financial fragility is on the back burner right now because people are more focused on the disease, but those fragilities are brewing and governments will capitalise their banks and take them over, and that is already in the making.”

One indicator of the potential trouble in store was the sharp rise in the number of borrowers being downgraded by leading credit rating agencies, which had reached record levels among sovereign and corporate borrowers in EMs, Ms Reinhart added.