The Bank of England on Thursday stuck to its view that the UK economy will bounce back rapidly at first from the coronavirus crisis.

But the central bank’s latest forecasts suggest it will be a long, slow grind before output and employment return to pre-pandemic levels — and that there are high risks of the recovery being thrown off course.

Below are the main takeaways from the BoE’s update on the state of the economy and the outlook for monetary policy.

1. The BoE is more upbeat than many economists about the short-term outlook

The BoE Monetary Policy Committee now expects the second quarter fall in gross domestic product to be less severe than that shown in its May projections, and the third quarter rebound to be stronger.

This is partly because lockdown measures were eased earlier than expected, and also because some forms of consumer spending picked up rapidly, with retailers adapting to online sales.

The recovery could slow if fresh outbreaks of the virus delayed the full reopening of the economy, making consumers reluctant to venture out because of health risks and wary of spending because of job insecurity.

“The MPC still doesn’t seem to have much faith in its own forecasts,” said Ruth Gregory at the consultancy Capital Economics.

The BoE thinks the recovery is set to slow dramatically after the third quarter rebound, with output returning to pre-pandemic levels only at the end of 2021 — meaning that the crisis will wipe out two years of economic growth.

It now expects a greater degree of economic “scarring” than in May, predicting that GDP will be 1.5 per cent lower than it would have been in the absence of Covid-19 at the end of 2023, because weak business investment and a lack of start-up activity will weigh on productivity.

3. It could take a long time for those who lose jobs to find new ones

The BoE is not as gloomy about the outlook for unemployment as it was in May, saying that government support schemes had limited job losses.

It predicts that most furloughed employees will return to work by the end of the year, with unemployment peaking at 7.5 per cent in the fourth quarter.

However, the unemployment rate does not capture all those who have lost their jobs. The BoE said many would be classed as economically inactive, because lockdown measures and school closures had stopped them job-hunting.

It could take a long time for the unemployment rate to fall, added the BoE, because of the sectoral nature of the downturn.

The consumer-facing sectors hardest hit by social distancing measures — led by the hospitality industry — are labour intensive and employ large numbers of non-graduate school leavers. People who lost jobs might lack the skills to gain new ones in the sectors that are hiring. 4. The central bank sees no immediate need to cut interest rates below zero

Andrew Bailey, the BoE governor, made it clear that negative interest rates were now “part of our toolbox” but said there were at present no plans to use them — a statement that boosted sterling.

An analysis set out in the central bank’s monetary policy report concluded that “negative policy rates could at this time be less effective as a tool to stimulate the economy”, because they could deter banks from lending if deployed when their balance sheets were already under pressure.

Victoria Clarke, economist at Investec, said that while the BoE appeared wary of the unintended consequences of negative rates, the MPC could nonetheless be “arm twisted” into cutting them below zero next year if the economic backdrop worsened.

The BoE’s forecasts, showing inflation rising close to its 2 per cent target in two years’ time, and slightly above its projection afterwards, would usually be taken as a signal that the next step could be an increase in rates, said Samuel Tombs, economist at Pantheon Macroeconomics.

But Mr Bailey made it clear there would be no rush to withdraw monetary stimulus. He said the MPC would first need “to be sure there was good news for activity, unemployment is falling and inflation is likely to exceed the target”, adding: “We stand ready to provide further stimulus should that be needed.”

5. The MPC is split in its views on the state of the recovery

The vote to leave monetary policy unchanged was unanimous but Mr Bailey acknowledged that the high degree of uncertainty about the BoE’s forecasts was in part a reflection of “vigorous and open debate” inside the MPC.

Andy Haldane, the BoE’s chief economist, has argued that the recent pick-up in consumer spending suggests a V-shaped recovery, while others on the MPC have argued that health concerns and fears over job security will hold back the economy. 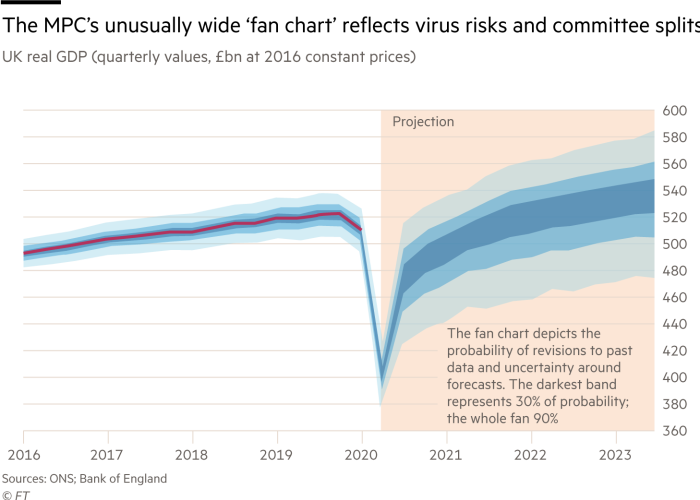 6. The UK is set to be hit harder than other developed economies

The BoE’s projections place the UK at the back of the pack among developed economies, with GDP falling by 9.5 per cent this year, compared with a drop of 8 per cent in the eurozone and 5.75 per cent in the US.

The central bank said this was partly because of the timing of the UK’s lockdown, as well as the fact that social consumption played a bigger part in its economy. 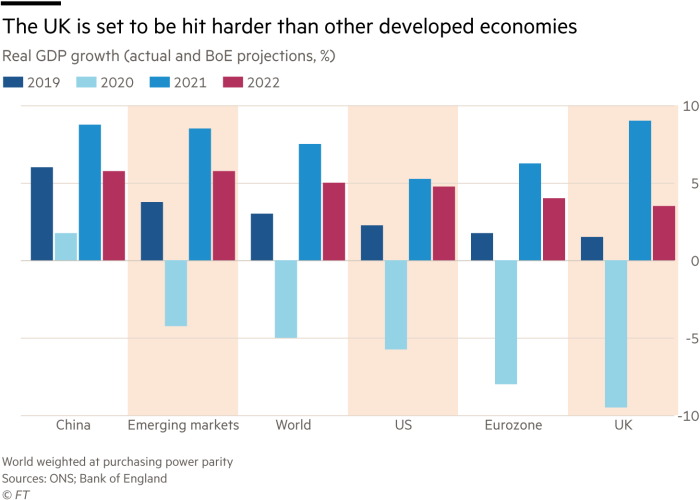