Expectations of a global economic revival in the coming quarter remain firmly established and underpins sentiment for risk assets. Such blue-sky hopes are counting on the current spike of Covid-19 cases flattening out quickly, starting with three important regions within the US.

Worries over renewed coronavirus infections are not solely a US story, given an upturn in cases in China, Japan, South Korea and Australia last weekend.

Market sentiment is buoyed to some degree by the reopening of the US north-east. After a solid rise on Monday, the S&P 500 is back in positive territory for June. But the benchmark notably lags the performance of European equities during June.

Also, given that California, Texas and Florida collectively account for nearly 30 per cent of the domestic economy, a significant chunk of business activity, Brown Brothers Harriman observe:

“With many reopenings on hold now, this will be a headwind that carries over into Q3. If these states can quickly bend the curve back down, perhaps the recovery can proceed but for now, we are getting more pessimistic about the US outlook.”

In spite of all the recent monetary and fiscal support, economic activity remains deeply impaired.

John Velis at BNY Mellon highlights that while recent data suggest the US has shown evidence of a rebound, the numbers still indicate “an economy that is operating at eight standard deviations below its historical level of growth” and via this chart highlights “a number measures of economic demand”.

John says that compared with the start of the year and the beginning of April, credit card spending as of two weeks ago remains “8.6 per cent below normal”, adding that:

“Perhaps the most striking — and troubling — data is on low-income employment, which remains 36 per cent below normal.”

That’s hardly an enticing backdrop and may well provide a sterner test of equity market resilience, and soon. After this week’s array of economic data, crowned by employment gauges for June, guidance from companies reporting their latest earnings figures could well keep market volatility elevated.

A key driver of the summer trading pattern is the path carved out by the virus.

“Another surge, such as what is occurring in Texas and Florida, may again test the Fed’s ability to manipulate equity market values, and it also underscores the need to continue income support past July 31, even if it is less generous — just in case the surge gets worse. What, in the end, the current events in Texas and Florida teach us is that the virus rules the roost, not policymakers. Policy can mitigate a downturn but not prevent it.”

Indeed, the S&P 500 is flirting with an important gauge of momentum, the 200-day moving average (3,020), after rising above this measure in late May. The FTSE All-World index has slipped below its 200-day MA, having spent much of June loitering around this area. Tests of the 200-day MA take time to unfold and, as seen in late February into early March, when such support does eventually break, the outcome is not pretty. Equally, a period of consolidation around this level can set the stage for another leg higher, as seen during 2016, March 2018, and from May of last year.

But analysts at Bank of America express some caution about the likelihood a summer rally in equities. That would entail the S&P 500 holding the line above the area of 2,930 to 2,950 points.

The high-flying tech sector should also be treated with a degree of caution, with Morgan Stanley Wealth Management warning that this group “within the S&P 500 has now extended relative performance momentum to extremes last seen in July 2000”, leaving the bank to conclude:

“While liquidity and low interest rates could continue to power price/earnings multiples forward, at some point valuation matters in terms of corporate earnings meeting extreme expectations.”

In broader market terms, one important component of maintaining risk appetite involves a retreating US dollar. Many expect a further decline in the reserve currency, reflecting hefty monetary and fiscal stimulus efforts.

The dollar has begun the week on a mixed note but BCA Research makes this important point about a stronger dollar when equity and political risk premiums rise:

“With a clear risk of a second Covid-19 infection wave, and with equity markets up strongly from their lows, odds are that volatility could rise in the near term. Renewed geopolitical tensions between China and the US as well as the upcoming US presidential election are also sources of risk.” 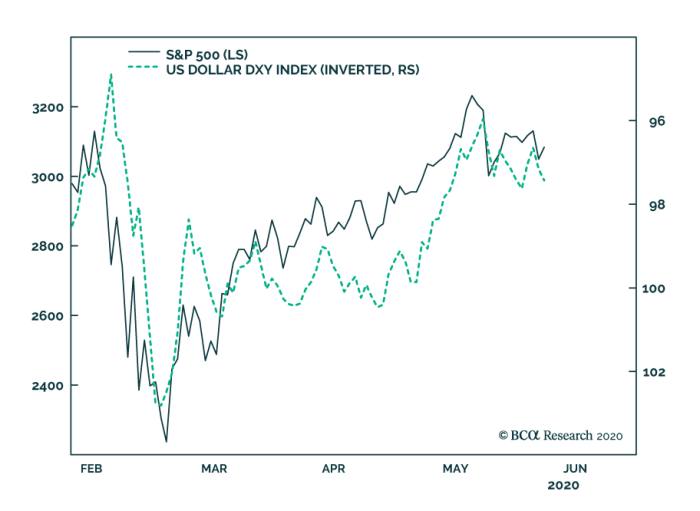 Another factor that suggests curbs being placed on a weaker dollar is how global interest rates are converging towards zero. There are likely limits to just how far some countries want to see their currencies appreciate against the US dollar in the coming quarters.

Big macro calls are popular among investment houses and banks. A weaker dollar is certainly in favour among many. What makes the current situation all the more complicated is the uncertain trajectory of the virus and the implications for consumer and business spending and confidence.

Or, as Lena Komileva at G+ Economics, notes: after all the stimulus efforts during the past three months “we are still in an environment where health risks, economic risks and financial risks remain closely intertwined”.

“The longer the pandemic progresses, the greater the chances that economic risk migrates from acute to chronic, and from chronic to structural.”

Sterling has extended its recent weak tone, notably lagging a lower US dollar. The driver of selling in the pound comes via a resurgent euro, with this currency pair briefly north of 91.5 pence on Monday and back at a level seen in late March. Further selling of the pound versus the euro is seen paving the way for a test of $1.20 against the dollar, argues Brad Bechtel at Jefferies.

Beyond Brexit-related matters, also weighing on sentiment for the pound is a steady climb in UK government borrowing. The FT’s Chris Giles writes about the third Treasury revision to its financing requirement since March, which now entails the Debt Management Office raising £275bn in the first five months of the financial year, compared with a full-year estimate in the March Budget of £156bn.

I’d love to hear from you. You can email me on [email protected] and follow me on Twitter at @michaellachlan.

Energy Source is back

On June 30, the Financial Times, in partnership with Datasite, will present a different perspective on the state of play in Emea dealmaking and seek to map out what the world of M&A will look like post-pandemic. What will the M&A environment look like, and what shifts can dealmakers make to get ahead of the crisis and find new opportunities?