Nexta Live has seen its subscriber numbers surge to over 1.5 million this week

For days Belarusians have had little information of the unrest filling their streets, with state-run TV making little attempt to report it and other websites and social media offline.

But one source of information that has attracted increasing numbers in this country of 9.5 million people is a channel on the popular Telegram messaging app called Nexta. Pronounced NEKH-ta, it has managed to bypass many of the restrictions.

By Wednesday, opposition websites were online again, but for three nights there has been silence.

How Nexta got to its audience

“We are sitting in a bunker,” is how one Belarusian described the situation.

Meanwhile, hundreds of messages are being posted for Nexta’s 1.5 million subscribers. A riot police vehicle is seen driving into a crowd, police are filmed beating a protester on the ground, petrol bombs are thrown – this news is visible and uncensored.

The Telegram messenger has only been available sporadically via wi-fi, but its founder Pavel Durov says it has enabled “anti-censorship tools”.

“An internet shutdown is a huge mistake by the authorities,” Nexta editor-in-chief Roman Protasevich told BBC Russian. “Telegram has picked up almost all Belarusians who are flooding the streets in an effort to bring about changes in the country.”

With most of the opposition leadership out of the country, the channel has played a key role in co-ordinating the protests. But more established opposition media are wary of such an activist source of information whose messages are hard to verify. 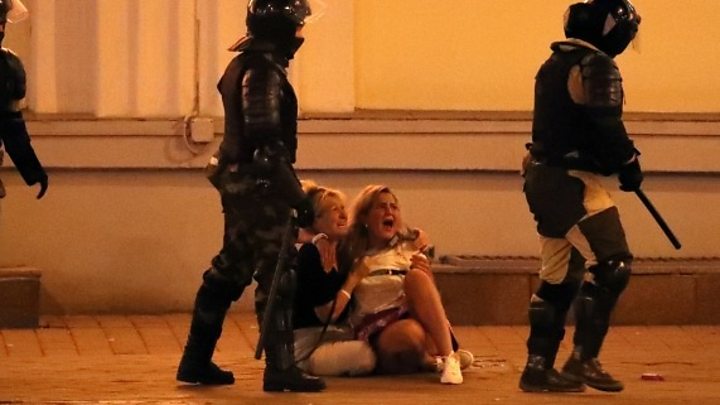 Nexta has published calls for help, maps showing where police are located as well as addresses for protesters to hide in, and contacts for lawyers and human rights activists.

It has also advised subscribers how to bypass internet blocking by using proxies and other means.

Ahead of the third night of protests, it put out detailed instructions to protesters on how to act on the streets.

It has no website, and only a small editorial team of four in Warsaw, but it does have a YouTube and a Telegram channel, and an audience hungry for information.

Its chief editor says they are “pioneers of cyber journalism”, where video and photo content is “as brief, informative and illustrative as possible”.

Founded five years ago as a YouTube music by teenager Stepan Putilo, also known as Stepan Svetlov, it translates from Belarusian as “someone”.

The first video was a sarcastic cover version of a song, mocking the 2015 campaign ahead of the re-election of President Alexander Lukashenko. “For all of 20 years there’s been no choice, only a worn-out tyre”.

Then it turned to corruption, theft and officials drunk driving, promising “honest information about the reality in Belarus”.

“It was my hobby. I made funny videos for my relatives’ birthdays. Then I decided to accumulate all the trash of Lukashenko’s Belarus,” Mr Putilo told human rights website Charter 97.

“The film tells in detail about how Lukashenko stole our country, dreams, freedom, future and 25 years of life,” Stepan Putilo said.

A court in Belarus declared the film was “extremist”.

Alexander Lukashenko has ruled the former Soviet country since 1994

But Nexta’s Telegram channel got noticed and the 2020 election took it to a new and bigger audience.

“Who in 2020 needs a site that any official from the ministry of information can block with one click?” its founders ask. Its Telegram posts have been attracting hundreds of thousands of views, more than websites such as Tut.by, hit by censorship.

The platform is secure, too, says Mr Protasevich, who argues that the stories they post would never get broadcast on state-run TV.

Like Stepan Putilo, he lives in Poland, where he applied for political asylum. Despite running the channel from outside Belarus he insists posts are checked for factual accuracy and he sees no issue about backing the protests from Warsaw.

Within hours, its audience grew on election night by 100,000 and then after two nights of protests it had amassed more than a million.

He says that although the channel mainly uses the information sent by users, he rejects criticism from such journalists inside Belarus. They say mistakes have been made, and they point to its apparent ability to co-ordinate protests.

Hours after Nexta reported that protester Yevgeny Zaichkin had died in the early hours of Monday, he told Reuters news agency he had survived a brutal beating from police.

Anna Kaltygina, from opposition website Tut.by, believes Nexta devalues media work by publishing unverified information and stirring revolution on the Telegram channel. “When working in Poland, it is difficult to fact-check messages that come from Belarus,” she told Echo Moscow website.

Nexta’s chief editor says what matters to him is the bloodshed on the streets. “Do I feel responsible for what we publish? Only in terms of whether it will bring people closer to victory and the end of the dictatorship.”

There is some confusion here. The channel has no ads and only the names of Stepan Putilo and Roman Protasevich are known.

Mr Putilo has said in the past that money has come from supporters as well as an earlier university scholarship.

However, his colleague told the BBC that they just had advertising and no donations.

A Belarusian petitions website recently called for state funding for Nexta, arguing it was far more useful than state TV.