Millions of garment workers in Asia have been deprived of $6bn in wages after the world’s biggest fashion brands cancelled or delayed orders and withheld payments because of the pandemic, a labour rights group has warned.

Many workers for suppliers to global fashion brands retailers including Hennes & Mauritz, Topshop and Gap, have allegedly received only partial or no wages at all in the three months ending May, according to a report by labour union alliance Clean Clothes Campaign.

The average worker in the 50m-person strong Asian supply chain for garments has lost about a fifth of pay, representing roughly $5.8bn in unpaid or lost wages, based on data gathered by the group.

“It has a huge impact on workers,” said Khalid Mahmood, director of the Pakistan-based Labour Education Foundation, adding that dressmakers in the country often work illegally long hours to make minimum pay of Rs17,500 (£80) a month. He said many were struggling to survive, adding: “We have seen many cases of garment workers pulling children out of schools because they cannot afford to pay fees.”

When pandemic lockdowns hit Europe and the US, many of the world’s largest retailers in the $2.5tn global fashion industry responded by demanding heavy retroactive discounts or refusing to pay for orders, as they struggled to sell clothes and revenues slumped.

Reports of workers’ pay being withheld began in February, after the pandemic broke out in China and severely hampered the flow of textiles, zippers, buttons and other accessories used in the Asian garment industry. “After that it only got worse,” said Christie Miedema at lobby group Clean Clothes Campaign.

In March, nearly 1m Bangladeshi garment makers — just under a quarter of the country’s total — were sent home without any pay at all, with suppliers reporting that the vast majority of buyers refused to contribute to severance pay. 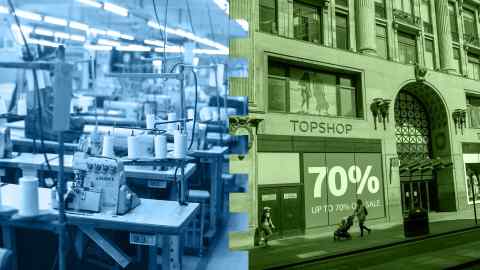 In some parts of India, Sri Lanka and Pakistan, the average garment worker made roughly half of normal pay in the three months ending May.

Excluding China, where workers have access to more support from the government, garment workers in Asia have seen their pay drop by more than a third, representing roughly $3.2bn in unpaid or lost wages, the report found.

The group made its estimates using publicly available data from the affected countries as well as other studies into the impact of the pandemic on garment workers.

H&M and Gap declined to comment on allegations that workers in their supply chain have had wages slashed. Arcadia, the company behind Topshop, did not respond to a request for comment.

Gap last month pledged to pay suppliers, but Arcadia has made no such promise.

The campaign group argued that while brands were not directly in control of workers’ wages they did “dictate how profits are made and distributed along their supply chains (and) choose to base their supply chains in countries with low wages and weak social protections”.