When Argentina’s former president Cristina Fernández de Kirchner asked her former cabinet chief Alberto Fernández to run in her place in elections last year, it was not just because she thought he had a better chance of winning.

The most urgent task facing the presidential victor would be to solve a thorny debt problem — something that would not have come easily to the mercurial populist who had been branded a market pariah by the end of her eight-year stint in power in 2015 due to frequent clashes with investors.

So far Mr Fernández, a veteran political operator with a reputation as a savvy negotiator, has not disappointed his former boss, who is now his vice-president. Not only did he win last year’s presidential elections by a comfortable margin, but on Tuesday his centre-left government triumphantly announced a deal with Argentina’s biggest creditors to restructure $65bn of foreign debt — potentially bringing the country’s ninth sovereign debt default in May to an end.

“The real story begins now,” said Jimena Blanco, Americas head at Verisk Maplecroft, warning that a successful debt restructuring would represent “a point of departure, not a destination”. If enough bondholders accept Argentina’s debt offer by the new deadline on August 24, as expected, it would just be a necessary first step in revitalising Argentina’s benighted economy.

The next stage is to negotiate a deal with the country’s largest creditor, the IMF, which has lent Argentina $44bn since a currency crisis broke out in 2018, with a stiff repayment schedule starting late next year. “It remains to be seen if the government can deliver the economic policies that allow the restructuring to become the springboard of the promised economic success story,” Ms Blanco said.

Alberto Fernández emerges strengthened from the agreement with creditors

The coronavirus crisis has only plunged the economy even deeper into a recession that is now into its third year, with the IMF expecting a contraction of 10 per cent this year. Argentina is also saddled with one of the world’s highest inflation rates, which will only be aggravated by extensive money printing since the pandemic struck. And strict capital controls first implemented last year have once again left the official exchange rate perilously overvalued.

The problem facing Argentina’s pragmatic president now is that fixing the economy and restoring investor confidence will require policies that may be hard to reconcile with a fragile domestic political environment that is dominated by his powerful vice-president, who controls the more radical faction of the diverse ruling coalition.

“Alberto Fernández emerges strengthened from the agreement with creditors,” said María Victoria Murillo, an Argentine political scientist at Columbia University in New York. “Let’s see what he can do next.”

An anti-IMF protester in Buenos Aires. Argentina owes $44bn to the fund © AFP via Getty Images

It is unclear to what extent the goals of the two Fernándezes — who are not related — are aligned.

Creditors were surprised to learn that the vice-president played a key role in the success of the debt negotiations, which was underlined by the visit that Martín Guzmán, economy minister, paid to Ms Fernández’s Buenos Aires apartment just hours before the deal was announced on Monday.

“She provided the support just when it was needed in the most critical hours over the last two months,” said one creditor close to the negotiations, cheerfully admitting that fears that Ms Fernández de Kirchner was against a deal were “proved wrong”.

But Nicholas Watson, Latin America managing director at the consultancy Teneo, suggests that her support for the debt deal was “a useful quid pro quo” for controversial judicial reforms announced by Mr Fernández last week that government opponents insist are designed to benefit his deputy, who faces multiple corruption charges. 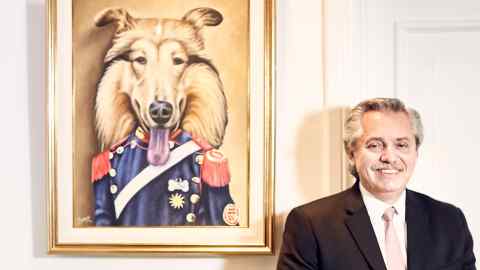 “The question is whether (Ms Fernández de Kirchner) and her followers will be as willing to swallow IMF conditionalities that will arise as part of the renegotiation process, particularly in the absence of any snapback economic recovery, and with the 2021 midterm elections looming,” he said.

For now, some observers believe that the government may delay a deal with the IMF for as long as possible. “With the creditor agreement (secured), there is less of a rush to go ahead quickly with the fund,” said one international banker. “Let’s hope they are not too over-optimistic as to how long it will take.”

Although Argentina now may be on course to avoid a protracted legal battle with its private creditors — as happened after the country’s last big default in 2001, locking it out of international capital markets for more than a decade — within the government there are no illusions about that scale of the challenges that lie ahead.

This week’s agreement certainly allows the government to claim a big victory. But one senior official cautioned: “It’s not like it’s mission accomplished, and that’s that. The challenges are still there.”