When the novel coronavirus began spreading rapidly throughout the U.S. in late March, 42 states and Washington, D.C., issued stay-at-home orders that shuttered all or most nonessential businesses for an average of nearly 50 days, with some orders lasting as long as 70 days (and counting). Over the same period, the U.S. has seen unprecedented job losses, with Thursday’s report of 2.1 million initial claims now part of a tally of 41 million Americans who have filed for unemployment insurance since the second week of March.

Although last week’s jobless claims declined at a faster rate (-13.2 percent) than they did the week before (-9.0 percent), the numbers involved remain immense by any historical standard:

There are a few shreds of encouraging news in the most recently compiled jobs data, though. For weeks, we’ve been waiting for the sheer number of people on temporary layoff or furlough — as opposed to permanent unemployment — to return to work and no longer show up in the official unemployment data. And as the economy begins to open up in 36 of those 42 states with shutdown orders, one place they might finally be appearing is in the number of continued unemployment claims. 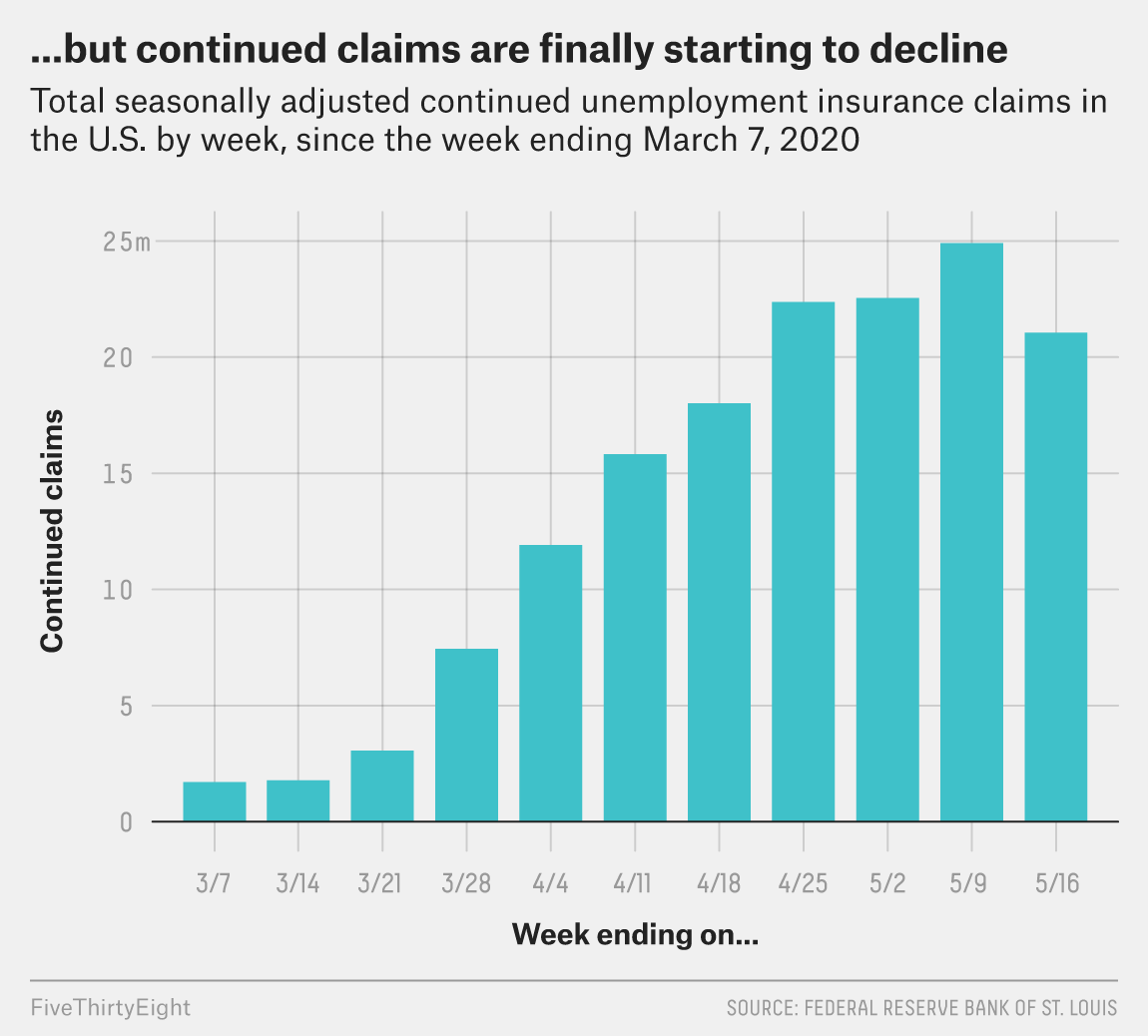 As opposed to initial claims, which represent the number of newly unemployed people filing for insurance, continued claims represent the total number of people — newly unemployed or not — whose claims were paid out in a given week. These claims run a week behind initial claims because we don’t know how many of those will eventually be insured. Now that we are months deep into the unemployment crisis, continued claims are arguably a better measure of the current state of joblessness in the U.S. than initial claims are — and for the week ending on May 16, total continued claims declined for the first time since the last week of February, before economic disaster hit American shores.

On top of laid-off workers potentially going back to work, this decline also speaks to companies’ beginning to hire slightly more than they have for most of the crisis. Total job postings on the employment-search website Indeed have increased in each of the past three weeks. Before we get too optimistic, though, those numbers are still sharply worse than in the same time frame in 2019: The volume on May 1 was 39.3 percent worse than on the same date a year ago, but it was just 35.1 percent worse than 2019 on May 22. Still, this is another data point showing that the unemployment situation has started to ever so slightly improve over the past few weeks.

Does that owe to states’ efforts to reopen? To look at this relationship, I asked Indeed for its job-posting trend data broken out by state and classified each applicable state according to how long ago it ended statewide stay-at-home orders.

The four states that reopened the earliest have been a mixed bag since lifting stay-at-home orders. The job-posting trend in Alaska has increased by 8.8 percentage points over the past four weeks, relative to its final week with orders in place; similarly, Montana’s trend is up by 4.9 points. But in the two more populous states, Colorado’s job postings are down 0.8 points, and Mississippi’s are down 5.7 points — meaning that job postings are down more now (relative to 2019) than they were when statewide orders were in place.

That’s just a sample of four states, of course — two of them ranking among the least populated in the country. But the group of states that reopened three weeks ago is larger (11 states) and has seen a similar pattern relative to states that waited longer to reopen: 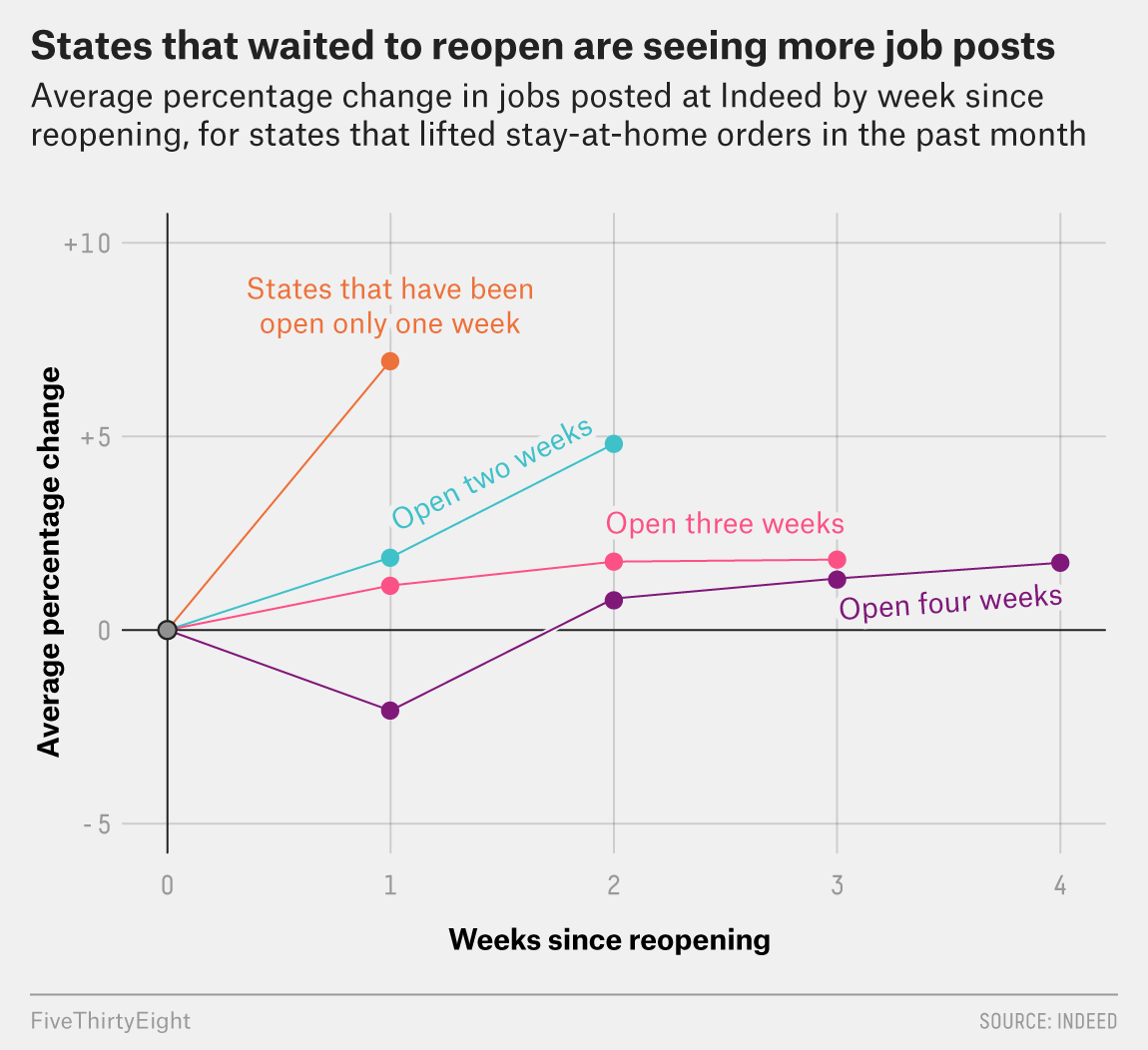 There could be some selection bias here: States that waited longer may have been in a stronger economic position than those desperate to reopen sooner (although everything above is measured relative to each state’s own jobs trend for its last week in lockdown). And states that never issued stay-at-home orders are, on average, down less in job postings from 2019 (-34.5 percent, as of May 22) than states that still had orders in place as of May 22 (-38.3 percent). But those numbers are also indicative of how little power government orders may have to restart the job market anyway when compared with the power of the virus itself.

Polls show that more than two-thirds of Americans remain somewhat or very concerned that either they or someone they know will become infected with the coronavirus. That has reshaped people’s willingness to go to restaurants and otherwise spend discretionary income, even in states that have loosened restrictions on those activities. As economists have been saying for a while, the only thing that can fully inject life back into the economy is getting the virus under control, which is more true now — according to new daily cases — than it was a month ago, regardless of whether stay-at-home orders were loosened.

And even with the total unemployment situation improving slightly this week, more trouble is on the horizon. The first wave of companies that were granted loans under the Payroll Protection Program will have their expenses covered only through June 30, after which we could see more potential job losses — or temporary layoffs turned permanent. (The U.S. House passed a bill to extend the window to use PPP funds by four months and push back the deadline to rehire workers through December, though it will face opposition in the Senate.) And, of course, any economic progress could be derailed by the ever-present threat of another surge in cases.

It’s another reminder that the virus is what ultimately started this financial crisis — and it will largely dictate the terms of the economic recovery.