After the most devastating year in aviation history, airlines are struggling to deliver goods and gifts in time for Christmas.

With thousands of jets on the ground after the pandemic and the collapse in passenger numbers, cargo capacity has been drastically reduced, just as an online shopping boom has boosted demand for air cargo.

This means that in the run-up to the busiest time of year, companies are struggling to find planes to transport goods around the world, putting pressure on the global supply chain.

According to the global trading organization International Air Transport Association (Iata), total cargo capacity is down 25 percent year-on-year, while air transport costs on the Baltic stock exchange rose again after rising to record levels in the second quarter.

After US consumers spent $ 9 billion online last week on Black Friday, up 21.5 percent from 2019, the e-commerce rush is pushing the market to the limit, according to software group Adobe.

Pressure on supply chains and the disruption of services caused Amazon to urge customers to shop earlier than normal to ensure they meet their Christmas deadlines.

“It will be tight for everyone. . . We’re all going to be stretched, ”Brian Olsavsky, Amazon’s chief financial officer, told analysts in October.

The capacity constraint has been exacerbated as the aircraft best suited to transport cargo, the large long-haul jets for long-haul flights, are still largely grounded and demand for short flights is returning faster.

It has forced the cavernous special cargo planes to fill the void. They will transport 80 to 90 percent of global freight this year, an increase of around 50 percent, said John Peyton Burnett, executive director of the TAC Index air freight group.

Air freight and courier companies like DHL and FedEx have also kept flying to fill the capacity gap.

“We expect the mother of all peaks [ahead of Christmas]”Said John Pearson, the CEO of DHL Express.

Germany-based DHL operates a fleet of 280 aircraft, roughly the same as British Airways, and has added 17 more this year to address the capacity constraint and hire 10,000 additional staff.

With more aircraft standing as needed, Mr. Pearson is confident that the complex web of supply chains connected by air will not collapse. 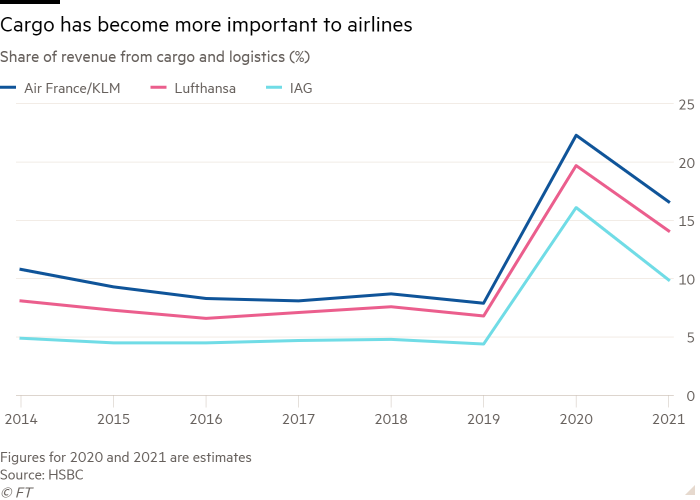 The US delivery company FedEx, which employs 500,000 people, provides an additional 70,000 seasonal workers to meet demand.

“I’ve been in this business for 40 years. I have never seen an operating environment more difficult than what we are in, “said Henry Maier, CEO of FedEx Ground, on the group’s latest earnings statement.

According to Iata, many airlines have also increasingly started cargo-only flights. This year more than 2,000 aircraft have been adapted for cargo workhorses.

Emirates’ four-engine A380 superjumbos, which can carry up to 50 tons of cargo, have flown back into the air as makeshift cargo planes.

“We saw the opportunity and knew that our existing cargo fleet would not be enough to meet demand,” said Nabil Sultan, an executive at Emirates SkyCargo.

The Dubai-based airline has also removed the seats from 10 of its Boeing 777 aircraft to make them “mini-freighters”.

“We have seen an increase in demand for shipping medical items like PPE and medicines, staple foods like fresh groceries, and even e-commerce as consumers went online for their purchases,” Sultan said.

This freight demand has put airlines like IAG, Lufthansa and Air France-KLM on their way to their best freight results yet, though it will do little to offset the billions of dollars in lost passenger revenue. 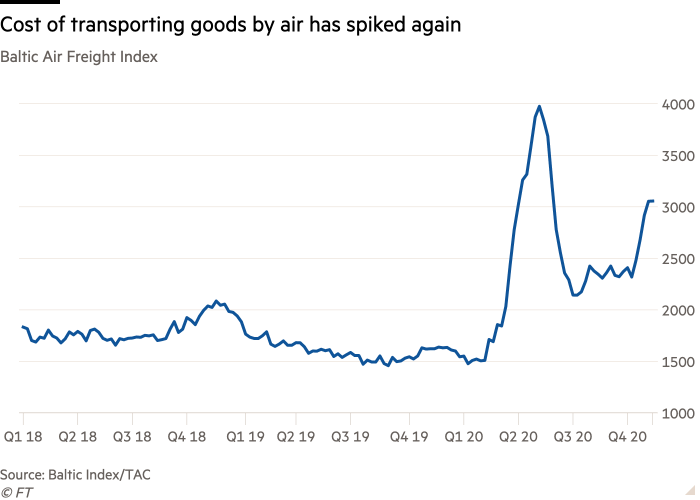 According to HSBC analysts, this has also turned the economics of the industry on its head, as airlines are for the first time planning long-haul routes where cargo has to be moved rather than where passengers want to fly.

Although less than 1 percent of the world’s goods are flown by air, it accounts for more than a third of the world’s trade by value. Expensive items like electronics and expensive fashion are usually flown rather than shipped, as are perishable foods, flowers, and medicines.

In the case of products with a lower value, rising costs can lead to them being pushed out of the market. Items like flowers were left on the tarmac when “prices rose,” said TAC Index’s Peyton Burnett earlier this year.

“It’s so expensive to move a certain product that it’s not worth it. . . There is always capacity in the market, you just have to pay for it, ”he added.

Delivery errors for these lower value items can be repeated as Christmas approaches, especially as online demand increases and freight rates increase.

The New Year will be even more challenging as the need to distribute Covid-19 vaccines creates more pressure.

Just as good is that large-scale distribution is not expected until the first quarter of 2021, he said once the busy period is over.

“In some ways the timing is pretty good,” he added, as almost every plane would be full between now and Christmas.