In the past two decades, China has become the largest bilateral lender to Africa, remitting nearly US $ 150 billion to governments and state-owned companies to secure supplies of raw materials and expand its global network of infrastructure projects, the Belt and Road Initiative.

However, as Zambia approaches Africa's first default in ten years and pressure on other debt-stricken countries mounts during the coronavirus pandemic, the crisis has highlighted the fragmentation of Chinese lending and Beijing's reluctance to fully align with global debt relief plans.

Chinese lenders have lent money to almost every country on the continent, and eight have borrowed more than $ 5 billion apiece this century. However, Beijing's involvement in an initiative to suspend debt service by the G20 group of the world's largest economies has been slow.

"It's frustrating," said David Malpass, President of the World Bank, this month. “Some of the largest creditors from China are still not participating, which is a heavy burden on the poorest countries. . . If you look at the (Chinese) contracts, in many cases they have high interest rates and very little transparency. "

China is the largest single contribution to the DSSI to date and is suspending repayments of at least USD 1.9 billion due this year. This emerges from an internal G20 document by the Financial Times, of around USD 5.3 billion that was suspended by G20 members for 44 debtor countries. The second largest contributors are France with about $ 810 million and Japan with about $ 540 million.

However, the extent of China's involvement is unclear. According to the World Bank, it should receive the largest amount of any G20 lender this year, with payments of about $ 13.4 billion due from DSSI countries, while France and Japan will each receive about $ 1.1 billion should. 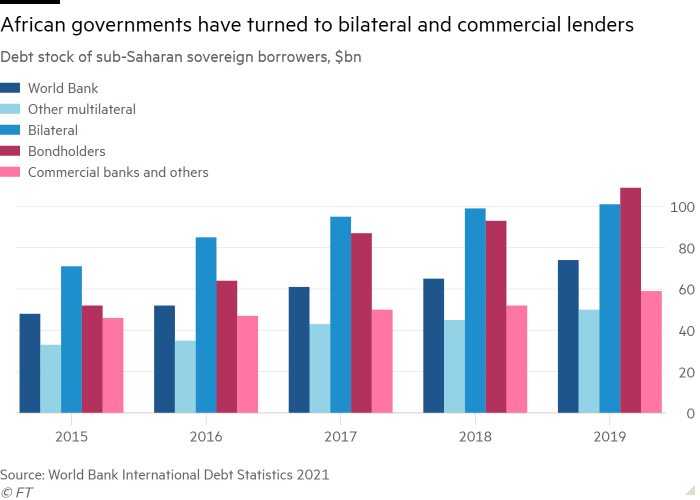 However, those numbers do not include repayments of $ 6.7 billion, which the IMF says are being negotiated between Angola and three major creditors. Analysts believe it is China Development Bank, China Export-Import Bank and ICBC, another Chinese lender.

Angola, Africa's second largest crude oil producer, was the continent's largest borrower from China this century and received $ 43 billion of the $ 143 billion loaned by China, according to the China Africa Research Initiative at Johns Hopkins University.

Sonangol, the state-owned oil company, has borrowed billions of dollars from the CDB at commercial interest rates, while China ExIm Bank has lent the government on preferential terms. ExIm bank loans are eligible for the DSSI, while Beijing counts the CDB as a commercial lender, which means it can decide whether to participate or not. ExIm Bank and CDB did not respond to requests for comments.

Angola's bonds illustrate one of the main problems facing the debt initiative: China has lent African countries through a variety of organizations, which means that information about who owes what to whom is partial and fragmented.

Ethiopia was also one of the top borrowers, borrowing at least $ 13.7 billion between 2002 and 2018 for everything from roads to sugar mills to a railroad line to Djibouti. In the past two years, China has pledged to restructure some of Ethiopia's loans. “The Ethiopian Government. . . has too many (Chinese) loans, ”said a Chinese official in Ethiopia.

Chinese lending should be understood as a product of "fragmented authoritarianism," said Deborah Brautigam, director of the China Africa Research Initiative. President Xi Jinping has pledged to work with other G20 members to implement the DSSI. "This is a signal (Chinese lenders) that they should, but not necessarily on the same terms."

Domestic projects by Chinese lenders complicate matters, said Liu Ying at Beijing Renmin University. "Every time China commits to debt reduction in Africa, there will be domestic outcry and pressure from people who still say they don't have enough to eat." 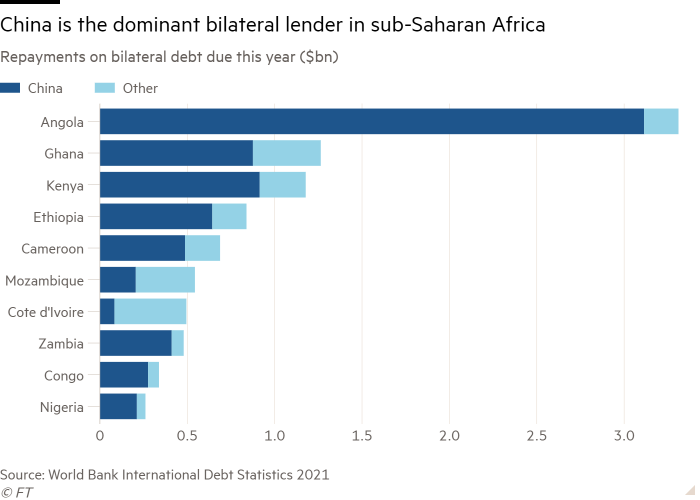 Even if bilateral debt has risen, it only accounts for about a fifth of the debt of the DSSI countries. Zambia has increasingly turned to China and the international bond markets to find less costly multilateral lenders. Debt has quadrupled to $ 12 billion in less than a decade, with $ 3 billion owed to bondholders and at least that amount owed to China. Zambia's bondholders wonder whether they will be treated equally to Chinese creditors.

As the DSSI makes it clear how difficult it is for all creditors to work together, the G20 is preparing a “common framework” for debt restructuring. G20 officials hope this will ensure that bilateral lenders share the burden equally and that relief is made conditional on borrowers seeking equal treatment from banks and bondholders. "It will be a proxy for China's entry into the Paris Club," said an official involved in the negotiations, referring to the informal group of bilateral lenders that emerged from the debt crises of the late 20th century.

Currently, China's credit strategy carries risks, said Trevor Simumba, a Zambian analyst. “China has used cheap secret loans to gain access to African resources. China has to rethink its strategy, otherwise there will be an enormous accumulation of debts that are very difficult to restructure and even expose many Chinese state-owned companies to a higher risk of default. "

For African countries attracted to less onerous Chinese loan conditions, "this crisis serves as a lesson," said Yvonne Mhango, an economist at Renaissance Capital. "To be more careful how much they borrow from the Chinese."