Hello from Brussels. EU summits are routinely referred to as “mammoth”. But the one that just finished on Tuesday after 90 hours of argy-bargy — long enough for one team to play an entire English Premier League football season, including half-time and injury time, with the games played back-to-back — was an entire herd of mastodons, and lumbered forward just about as elegantly. It got there in the end, however, creating a new large-scale commission debt instrument, as my colleagues have succinctly explained.

One thing though: who’s going to pay back the bondholders? Today’s Tall Tales focuses on the improbable idea that funding it through tariffs isn’t a tax on EU consumers. Today’s main piece examines the EU’s latest attempt to enlarge its arsenal of trade weaponry against dastardly dealings by partners. Our chart of the day looks at the relative outperformance of the Australian economy.

Gonna try coercing me? Do you feel lucky, punk?

We’ve written before about how a dramatisation of the EU’s trade policy over the next five years (following the previous epic, Invasion of the Appellate Body Snatchers) might be Enforcement: The Movie, in which a crack squad of European Commission officials hold rogue trading partners to account. But what weaponry will they have to hand?

A sure way of riling commission officials is to describe their newest ordnance, as have some Brussels media, as a “bazooka”. Not Trade Secrets, to be fair. To us it looks reasonable enough: a precision-targeted instrument which imposes tariffs against a trading partner who loses the first stage of a World Trade Organization case but then puts the litigation in limbo by appealing to a now-frozen appellate body.

But now MEPs on the European Parliament’s trade committee want more firepower. They’re contemplating a unilateral instrument whereby the EU can swiftly suspend commitments on tariffs, services trade or intellectual property protection if it deems a partner to have broken WTO or preferential trade agreement rules.

Cue much pearl-clutching at the commission. Under WTO rules, member governments cannot act as prosecutor, jury and judge of trading partners’ actions. Governments need to bring a WTO case to have something declared illegal before imposing trade sanctions. The commission hates unilateral measures that might contravene WTO law. So is this just MEP posturing, destined to fail? Not quite. Here’s why.

Provocatively, you could call the MEP proposal a “European Section 301”, after the provision in US trade law beloved of current US trade representative Robert Lighthizer. (It’s the one he used to force China to the negotiating table.) It’s not a label that MEP supporters entirely reject. “Maybe it’s possible to have a comparison with Section 301 in the United States,” Marie-Pierre Vedrenne, the French centrist MEP who acted as the European Parliament trade committee’s rapporteur on the issue, told Trade Secrets. (Since the influx of French Macronites, the centrist bloc of MEPs are more trade-sceptical than before).

Tactically, she says, it is not the same. “The basis for the US tool is different. It is used more to attack. Our proposal is a temporary measure.” She likens it to playing with water pistols with her daughter: she needs her own to have a credible deterrent and avoid getting soaked. Vedrenne says she is working with parliament and commission lawyers to design something WTO-compatible. Still, she said: “I think maybe in the juridical aspects it be could be the same (as the 301)”.

However, the commission is working on a slightly different cunning plan that starts outside the WTO rule book. It is thinking of invoking a general principle of public international law against “coercion”, where one state uses excessive force to try to change another’s policy. The principle permits the wronged party to suspend other obligations to the aggressor. The concept of illegal coercion is often used in a military or security context, but — as was much discussed with the Arab oil embargo of 1973 — can also be applied to economic actions.

If, say, the US cites Section 301 and unilaterally raises goods tariffs in response to EU member states’ plans for digital services taxes, as Lighthizer threatened to do recently, the EU might declare that to be coercion and retaliate without the need for WTO litigation first. If the US then started a WTO case against the retaliation, Brussels would argue justification on grounds of coercion and hope a WTO disputes panel agreed.

Since the weapon is only for use against unfair sanctions rather than illegal trade distortions in general, it’s more narrowly designed than what the MEPs seem to want. The commission regards it as an anti-Section 301 rather than a Section 301-type instrument, a retaliatory strike capability with a no-first-use constraint. The hope is that it has a deterrent effect and never has to be used. It might not be all the MEPs want, but it might be the best they can get.

The project is at an early stage. But the head of the commission’s trade directorate, Sabine Weyand, floated the idea of a new instrument in recent testimony. And the consultation note for the EU’s forthcoming review of trade policy specifically mentions coercion.

It will take a while to develop — and to be frank, if Joe Biden wins the US presidential election, the use of Section 301 will very likely drop off and the imperative will be much weaker. But it’s another compelling scene in Enforcement: The Movie in which the EU’s special forces go further into enemy territory with funkier weapons than they have carried before.

Australia has reported its largest budget deficit since the second world war after it was forced to introduce emergency measures to keep workers employed and prevent an economic collapse as a result of the pandemic. But the country is performing better than most other developed nations due to its strong handling of the health and economic effects of Covid-19, say analysts. 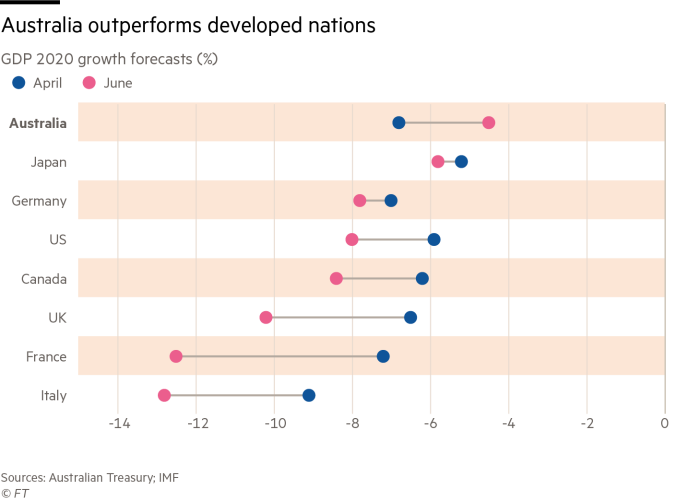 The epic EU summit ended with a big expansion of the union’s borrowing capacity, with bonds issued centrally by the European Commission rather than its member states. Just one thing: who’s going to repay them when they fall due? In classic EU fashion that question has been punted off to the future. The only tax mentioned so far is on plastic waste. Still, that hasn’t stopped Thierry Breton, the EU’s ebullient internal market commissioner, claiming in a tweet: “And to finance this historic #loan, no taxes for our fellow Europeans citizens. It is only at the #borders of our internal market that we will put taxes.”

For a start, this simply isn’t true. The plastic waste tax is levied domestically. Breton presumably means new external tariffs: the carbon border tax, if it ever gets implemented, is often cited as a new source of revenue. But it is literally the economics of US president Donald Trump that such duties are paid by foreign exporters rather than the citizens of the importing country through higher prices. They might notice it less, but that is what’s happening. Breton is going to be in for an awful lot of rebuttals from incredulous economists if he tries to keep this tall tale going.