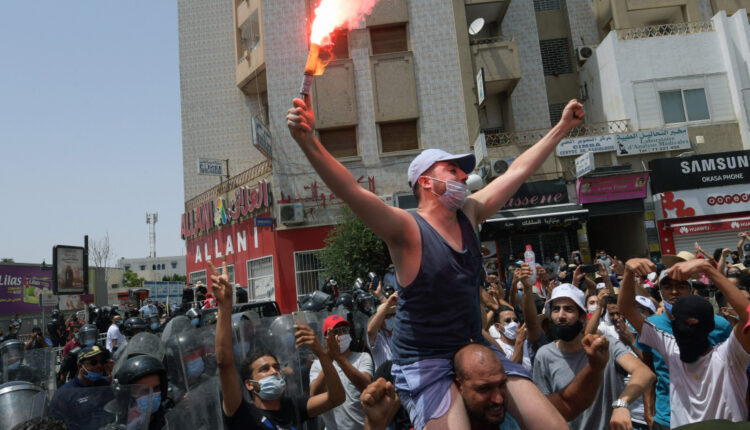 Police used pepper spray against demonstrators in Tunis who threw stones and demanded the resignation of Prime Minister Hichem Mechichi and the dissolution of parliament.

Hundreds of protesters have gathered in the Tunisian capital and other cities to call for the government to resign after a surge in COVID-19 cases that has exacerbated economic problems.

In Tunis, police used pepper spray on Sunday against demonstrators throwing stones and shouting slogans calling for Prime Minister Hichem Mechichi to resign and for parliament to be dissolved.

The protests are putting pressure on a fragile government embroiled in a political battle with President Kais Saied, who seeks to stave off an impending financial crisis amid a week-long surge in COVID-19 cases and increased death rates.

The pandemic has hit Tunisia as it struggles to boost an economy that has suffered since the 2011 revolution and undermined public support for democracy as unemployment rose and government services fell.

Tunisian anti-government protesters throw stones amid clashes with security forces during a rally outside Parliament in the capital, Tunis [Fethi Belaid/AFP]

“Our patience has run out … there are no solutions for the unemployed,” Nourredine Selmi, 28, an unemployed protester, told Reuters. “You can’t control the epidemic … you can’t give us vaccines.”

The ministry said earlier this month that Tunisia’s health system “collapsed” under the weight of the pandemic, which has caused more than 17,000 deaths in a population of around 12 million.

After a year of fighting with Mechichi and Ennahda leader Rached Ghannouchi, who is also speaker of parliament, President Saied said the army would take over the response to the pandemic.

Some analysts saw Saied’s move as an attempt to extend his power over the foreign and military roles assigned to the president in the 2014 constitution.

Government paralysis could undo efforts to negotiate an International Monetary Fund loan, which is seen as critical to stabilizing public finances, but it could also include spending cuts that would exacerbate citizens’ economic pain.

24 Celebrities Who Have Been Married At Least 3 Times

As the New York economy recovers, internships for people with…

According to forecasters, the UK economy is growing fastest in 80…