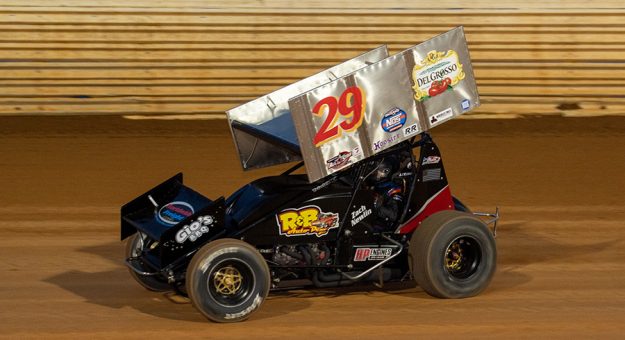 “Woooo!” Newlin yelled on the front stretch of the speedway in an interview with DIRTVision’s Chase Raudman. “This is fantastic!”

Newlin had just qualified for his first World of Outlaws feature thanks to a fourth place in the heat.

An immediate interview was not required to see the achievement. Newlin’s car owner Allen Pryde gets by with the bare essentials, used tires and an open trailer. Newlin, on the other hand, is a fresh face in the world of 410 sprint cars.

But when Newlin heard his meaningful words, the story became even more compelling.

“I don’t even have 20 races in the 410,” he continued. “Oh man, I really hope Sean Burke will see this … we got the year off to a bumpy start. Got fired from driving, then everyone called me about that car. Man, a door closes and a really good one opens. Newlin is the 2015 and ’18 champion of the 305 Pennsylvania Sprint Series. At one point in his 305 trip from 2013 to ’19, he was the third-placed driver in the national points of the International Motor Contest Ass’n.

He jumped into the 358 class last year and took his first win at Williams Grove Speedway in Mechanicsburg, Pennsylvania.

Not long after that, he broke into the 410 ranks with Sean Burke. In his second race – the Labor Day Classic at Port Royal last September – he finished 13th from 23rd on the grid and earned tough overseer awards.

Newlin and Burke only top 20 three times in 15 races from August to June of this year, so they parted ways.

“My opinion was not well taken off the things I was doing earlier in the year,” Newlin said. “Man, I feel good now.”

Check-in in the middle of the race with @ zachnewlin11z!

If you all look at @dirtvision you will be aware of that.

For those who aren’t, Newlin just put the # 29 Allen Pryde on the @WorldofOutlaws show at @PortRoyalSpdway.

You have to love that. pic.twitter.com/uCG16TaHfP

On the first night of the World of Outlaws Nittany Showdown on Friday, Newlin qualified last – 38th of 38 cars – and fell one place behind the last transfer position in the Last Chance Showdown.

On Saturday, Newlin qualified seventh – within 0.126 seconds behind Brad Sweet, Anthony Macri and Donny Schatz – and finished his race ahead of Danny Dietrich.

“We just did what we had to do,” said Newlin, who then went to the World of Outlaws trailer and learned where he would start in the 30-round main event.

“Dude, I’m starting next to Lance Dewease and behind Donny Schatz,” said Newlin. “It’s very simple: follow them and [expletive] to learn!” Unfortunately, Newlin’s thrill fizzled out in the first corner of the race. He tried to keep his line through the top of turns one and two, not far behind Schatz, but enough room for Sheldon Haudenschild to slide forward and knock Newlin off course.

“It took the air straight from the front,” said Newlin, who then smashed the wall and broke the right rear W-link.

Newlin limped around the half-mile of Sandoval for six laps, then parked it for the evening.

“I feel bad because I am unable to perform better, but it’s also bad because I went back four with the World of Outlaws,” Newlin said. “Before we went out, I was like, ‘Holy shit folks, what should I do? Am I going up or down? ‘ They were like, straight up, chances in there. ‘

“We found out,” said Newlin.