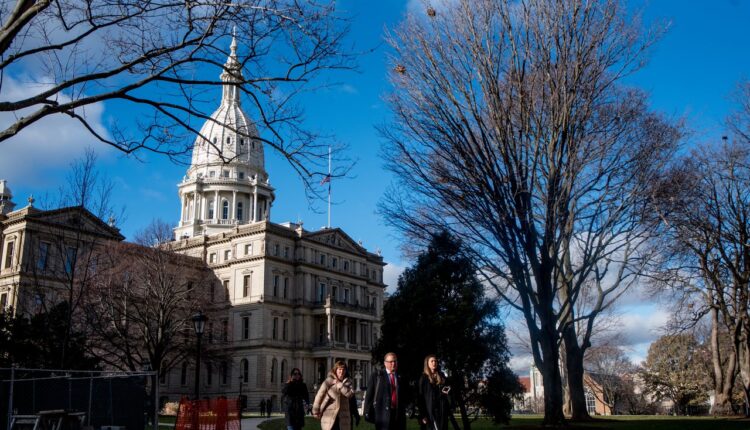 LANSING, MI — Lawmakers from both sides of the political aisle agreed on one thing this week: a proposal to stop collecting sales taxes on feminine hygiene products.

Meanwhile, Democrats and voting rights advocates are preparing to fight against a petition initiative launched by a conservative group to create stricter ID requirements for voting, bar private funding of election administration and make absentee voters take additional steps to ensure their ballot is counted.

Here’s more from this week in Michigan politics:

Gov. Gretchen Whitmer outlined the broad strokes of a $2.1 billion proposal to boost Michigan’s economy while meeting with minority small business owners in Detroit on Wednesday.

The stop in Detroit is part of a statewide tour the governor is using to promote her budget priorities and lay out proposals to spend a fat stack of federal pandemic relief funds. Whitmer reiterated her support for investments in programs to expand access to job training, post-secondary education and growth opportunities for small businesses.

“We’re poised to learn from this once-in-a-generation pandemic,” Whitmer said. “If we take action in these spaces, we can all emerge stronger.”

Michigan’s economy grew 7.6% in the first quarter of 2021, the fastest of any Midwest state, while the unemployment rate continues to steadily drop. The governor expressed optimism about the state’s economic recovery amid a protracted COVID-19 pandemic but said the state is still grappling with a labor shortage.

“There just aren’t enough workers to fill open jobs,” Whitmer said. “Entrepreneurs find a lot of challenges, not just in the startup phase but in the growth phase of their businesses.”

The governor also pointed to specific programs worthy of expansion, including a $215 million boost to the Michigan Reconnect and Future for Frontliners programs, $100 million for the Going Pro skilled trades credential program and $70 million to bring in more talented workers.

A Republican-backed group filed petition language Thursday with the Michigan Bureau of Elections in an initiative to create new voter identification requirements that wouldn’t require the governor’s signature to become law.

The measures outlined in the petition language would create stricter ID requirements for voting, bar private funding of election administration and make absentee voters take additional steps to ensure their ballot is counted.

The full language can be viewed here.

After a public comment period, the Board of State Canvassers has until Oct. 1 to approve or reject the summary of the content of the petition.

The group behind the initiative, Secure MI Vote, said the changes would make it harder to cheat. Democrats say the measures will make it harder for residents to vote.

If the petition gets enough signatures, the proposed measures would avoid being vetoed by Gov. Gretchen Whitmer and could be enacted by Michigan’s Republican-controlled Legislature.

It’ll takes 340,047 petition signatures from Michigan registered voters to give the state Legislature a chance to approve the proposed new laws. Whitmer, a Democrat who has vowed to veto a number of Republican-proposed election bills, would have no ability to stop the Legislature from adopting the initiative should the petition drive garner enough support.

Michigan’s election laws currently requires voters to either show ID or sign an affidavit in order to cast a ballot. Secure MI Vote wants to require those without ID to cast a provisional ballot, which wouldn’t be counted unless the voter returns within six days to verify their identity.

While the first step in the process for Secure MI Vote’s initiative was to file the petition language with the Secretary of State, the conservative-led effort to add more voting requirements in Michigan has been months in the making.

Many items included in the initiative have been proposed within a Republican-sponsored bill package introduced in May, which drew accusations of racism and voter suppression from Michigan Democrats and evocations of the Civil Rights movement earlier this summer.

Three of the controversial bills passed the Michigan Senate along party lines in June amid contentious debate over the purpose of the legislation.

The emphasis on ID requirements for voting has continued in Republican-led state legislatures across the country following former President Donald Trump’s 2020 election loss.

Michigan’s jobless prepare to be cut from unemployment Sept. 4

About 500,000 Michigan residents on unemployment will lose the added $300 of weekly benefits after Sept. 4 and the 400,000 people on federal programs will be kicked off unemployment entirely.

Nationally, 7.5 million people are getting kicked off unemployment next week.

For some, they’re not sure what this will mean for their families.

Nearly 18 months after the pandemic began, Michigan’s UIA is still struggling to parse out the cheaters from the legitimate claimants. For many, that means they’ve been denied benefits or were ordered to repay thousands.

The most notable issue was caused by an error of the UIA, which offered choices to get federal unemployment that weren’t federally approved – although similar in wording.

About 650,000 claimants received letters saying they might not have been eligible for the money they got. Weeks later, Michigan decided to give most of those people waivers so they didn’t have to repay the money. But others remain in limbo.

Tracy Reetz’s benefits were halted in July and she got a letter saying she owes Michigan $11,000.

The health care worker from the Mount Pleasant area fell seriously ill from COVID-19 in September 2020.

“Not until the end of March was I able to function again,” Reetz said.

She had worked in her field for 37 years and had never been on unemployment before. Now, as she’s searching for new work, Reetz doesn’t have the help of the unemployment insurance her paychecks helped fund over the years. 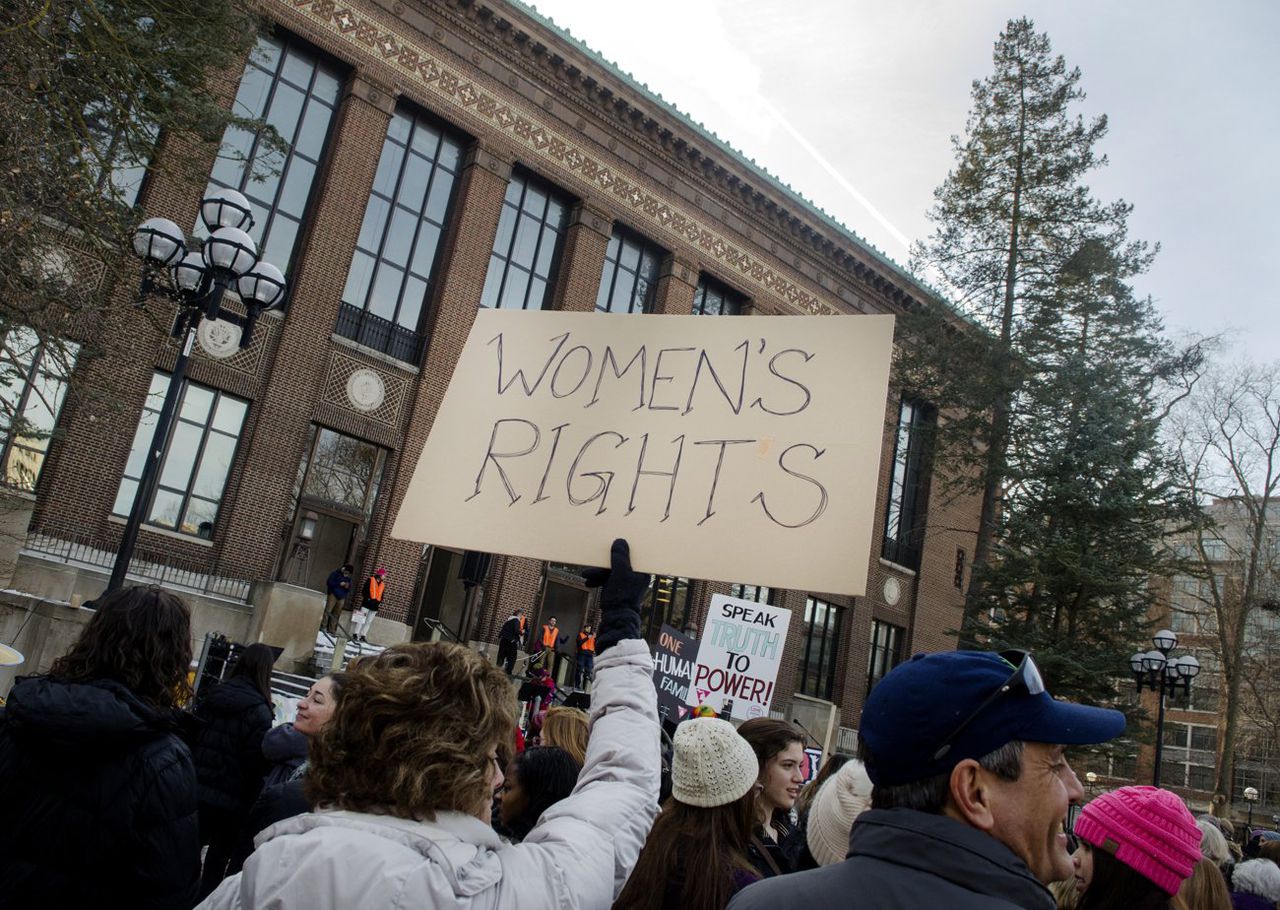 Democratic lawmakers are preparing for a fight over abortion access, some expressing fear that the strictest abortion law since the procedure was legalized almost 50 years ago could be replicated in Michigan.

In Texas, a law prohibiting abortions past six weeks, before many women know they’re pregnant, took effect Wednesday, with the U.S. Supreme Court deciding not to issue an injunction on an emergency appeal to keep the law from taking effect.

Read more: ‘I am alive because I had an abortion at 8 weeks:’ Michigan Democrats react to Texas law, fear replication

The court’s decision Wednesday is being perceived as a blow to Roe v. Wade, the Supreme Court ruling that legalized abortion in 1973, and is receiving harsh criticism from Democrats across the country and in Michigan.

“I am alive because I had an abortion at 8 weeks. The Supreme Court’s failure to value the lives of women in Texas is downright scary. Women should have the right to make their own healthcare decisions. PERIOD,” Morse said in a Twitter post.

Michigan Senate Democrats issued a statement Thursday condemning what they described as a failure by the U.S. Supreme Court to protect women’s health care.

“These bills do not, and will not, stop abortion; they stop safe abortion. While most Americans support a woman’s right to make her own health care decisions, extremists in the Texas Legislature and activist Supreme Court judges are forcing their personal beliefs on millions of people,” Senate Democrats said in the joint statement.

Senators referenced polling from the Pew Research Center that found 6 in 10 Americans say abortion should be legal in all or most cases.

“We must protect the UNBORN. Life is worth fighting for,” the party posted to Twitter.

There are a number of bills and resolutions recently introduced by Republican lawmakers in Michigan that would discourage or restrict access abortions.

In a 20-16 vote along party lines, the Michigan Senate on Thursday passed House Bill 4061, a measure that would prohibit the state’s public threat alert system from being used to announce a new law or executive order unless necessary “to respond to an immediate or nearly immediate loss of life or property.”

At the time, Slagh argued it amounted to overuse of the alert system that would “cause people to become numb to legitimate emergencies.”

In total, the Whitmer administration has sent pandemic-related emergency messages to residents four times, none of which were in 2021. One of those messages was to announce the effective date of the state’s stay-at-home order on March 23, 2020, in the early days of the pandemic.

Individuals have an option to turn off notifications for the alerts on their phones.

According to a House Fiscal Agency analysis of the legislation, the administration sent its emergency alerts through the federal Wireless Emergency Alert system, which did not directly involve the public threat alert system that House Bill 4061 would change.

HB 4270, introduced by Rep. Tenisha Yancey, D-Detroit and HB 5267, sponsored by Rep. Bryan Posthumus, R-Cannon Township, would amend the Use Tax Act and the General Sales Tax Act, respectively, to exempt feminine hygiene products from sales and use taxes.

These products include tampons, panty liners, menstrual cups, sanitary napkins, and other similar products designed for feminine hygiene in connection with the human menstrual cycle. Those products are currently subject to Michigan’s 6% sales and use taxes.

The so-called “tampon tax” generates about $7 million in state revenue each year, according to a House fiscal analysis.

Yancey, who introduced similar legislation during her last term, said she hopes to see the legislation make it across the finish line this time around.

“This is more than just good policy that needs to be turned into law, as every woman in this room knows, menstruation is not a choice,” Yancey said. “Poor menstrual hygiene due to the lack of these products can lead to serious infections and sometimes cervical cancer.”

“It makes sense economically, it’s beneficial from the standpoint of encouraging health and wellness and it’s pro taxpayer,” Posthumus said.

While most Republican gubernatorial candidates gather at the Mackinac Republican Leadership Conference later this month, Garrett Soldano will be up north for a different event: a grassroots rally in Antrim County.

He has said he’s not attending the leadership conference out of concern that a “straw poll” the party typically conducts measuring support for candidates will be rigged.

“The GOP establishment has already attempted to rig the primary in favor of their hand-picked candidate,” Soldano said in a press release.

“We the people will choose our nominee, not them. I am excited to join grassroots leaders who led the charge against Whitmer’s tyrannical lockdown agenda.”

As of last week, the party was still finalizing plans for a straw poll, per a spokesperson who emphasized that that grassroots were a big reason the party held the event.

The “We the People” rally Soldano is holding takes place in Antrim County, which became the center of far-right election fraud theories after an error at the clerk’s office initially showed the heavily Republican county having voted for now-President Joe Biden. The votes were re-tabulated to obtain the official results, and a hand re-count verified the result. Trump won the county.

A Republican-led Senate investigation into allegations of voter fraud found “ideas and speculation that the Antrim County election workers or outside entities manipulated the vote by hand or electronically are indefensible,” and discredited a so-called “forensic audit” by a private group that left out key information and contained factual inaccuracies.

COVID outbreaks increase another 11% in Michigan

Rick Obrand is a collector and historian of City Section Sports