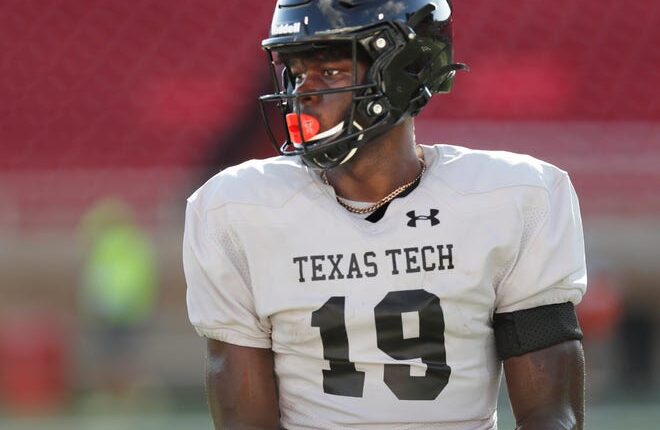 During his first forays into American football, Cameroon-born Loic Fouonji realized that being big and fast was practical.

Not necessarily getting touchdowns, although that was a nice advantage. Most of the time, however, being tall and quick helped him avoid injury.

Describing his days as a running back in youth football, Fouonji said: “I didn’t want to get injured or attacked because I thought it would hurt a lot. So my goal was to get the ball and run, take off.” and try not to be touched. “

Fouonji had a talent for that. He became a prolific receiver at Midland Lee, catching 142 passes for 2,781 yards and 40 touchdowns in his last three college seasons, and becoming a major college football recruit. Texas, Texas A&M, Oklahoma State, and Southern California wanted it among others.

Now in his sophomore year at Texas Tech, Fouonji is 6-foot-4 and Dave Scholz’s strength and conditioning team has filled his body to about 218 pounds.

Fouonji and JJ Sparkman are two big outside recipients who signed the Red Raiders 2020 and both will get their chances.

“JJ looks fantastic. Loic too,” said Wide Receivers coach Joel Filani last week. “They really evolved. In that (second) year they kind of evolved. JJ played a lot of games. Loic too. You just have to move on, evolve and take the next step.”

Fouonji played all but one game last season, catching five passes for 69 yards, including his first touchdown of his career with a 31-yard catch in Oklahoma.

More:Wells is nearing the QB election after the tech scrimmage

On the outer receiver spots, the Red Raiders return to First Team All Big 12 Honors Erik Ezukanma and take on Kaylon Geiger, who has won first and second team Sun Belt recognition in Troy for the past two years Conference received.

The sophomores Trey Cleveland and Fouonji, the Redshirt newcomer Sparkman and the real newcomer Jerand Bradley fight for time in the rotation.

“We have a lot of good recipients in our unit,” said Fouonji, “so that means a lot of competition. So you have to be ready every day. … It’s not easy. You really have to come and compete” every day. “

Fouonji was born in Douala, the largest city in Cameroon with more than 2 million inhabitants. He was 8 years old when his family moved to the United States and has lived in Houston, Longview, and Midland. Alexis Fouonji, Loic’s father, is a Senior Consultant in Oilfield Services.

As with many foreign-born children, to young Loic Fouonji, football meant what Americans know as football. During Texas Tech’s Saturday scrimmage at Jones AT&T Stadium, linebacker Trent Low returned an interception for a touchdown.

Low was Fouonji’s teammate at Midland Lee and now Tech, and Fouonji credits Low’s father – former Lubbock Christian University basketball player Sean Low – for getting him out for the Greater Midland Football League.

“One of my linebackers, Trent Low, his father was a GMFL coach,” said Fouonji. “His son saw me playing soccer during the breaks. He told his dad and his dad recruited me or whatever, and that’s how I went to soccer.”

Despite the success Fouonji has seen, he says his parents are still learning the rules and nuances of the game to this day.

The soccer boy, who used to be shy of contact, has learned over the years that he can take a hit, get up again and let the other boys pay.

He’ll have to if he wants to reach his potential in the Big 12. So did the other young Red Raiders receivers.

Fouonji was an All-A grade high school student and had a grade point average of 3.8 in his freshman year of tech. In the classroom he learns everything about computer technology.

As his training in football progresses, Fouonji gains more and more confidence in his physical abilities and physique.

“Over time I’ve learned that I’m pretty quick, pretty strong,” he said, “and since I’ve been here, coach Scholz and his staff have been able to put a strain on me. So now I’m stronger than” I’ve been before there, so I can use that on the field and make moves. “