As the county season ended on October 1st in mild autumn sunshine and the Bob Willis Trophy was raised next to the Warwickshire County Championship on the Lord’s Balcony, thoughts turned to the annual Spin Awards. These gongs, with no prize money or gravitas to praise, celebrate the good, the bad, and downright idiosyncratic of the championship season.

The Chris Woakes Award for Unsung Hero of the Year Radio 5 live cricket champ Kevin Howells spent his season wandering the country at the end of summer in search of the game that would best please his voracious listeners. In the last week of September he was forced to get back into the driver’s seat and jump from Aigburth to Edgbaston in search of a decent radio link. In a good mood, dogged and an energetic wearer of a waterproof coat, he is a brilliant broadcaster and a tireless advocate of the circle game.

The Dorian Gray Award for not walking gently For the third time in a row Darren Stevens. Turns out he viewed last year’s Wisden Cricketer of The Year award not as an end-of-career gong but as a mid-career catalyst that ushered in yet another summer of daring. He stormed the spring at 100 against Northamptonshire, the oldest player to land a ton of championship since 1986, and surpassed him at 190 against Glamorgan, inspiring more than 90,000 people to watch online. He finished the season as Kent’s leading wicket taker, the third highest running hit and on a new one-year contract.

The Avocado Award for Seasonal Appetizers The snowstorm that played table tennis over the Pennines in the spring and ruined the games between Yorkshire and Glamorgan and Lancashire and Sussex. Red fluffy blankets and heaters were brought to the Old Trafford press box to prevent icicles from forming while the Sussex players had a snowball fight on the outfield.

the Hardik Pandya Award for brotherly love Joe Roots pats on the back for little brother Billy as he switched to his century with a clip on the legs against his older brother; Matt Parkinson campaigns on Twitter for his twin brother Callum, another weirdo and Leicestershire captain.

The YTS award for services for under 21 year olds Sussex who risked collective coronary damage to their long-suffering members by opening the red ball team to a group of their most talented teenagers. Sometimes it worked – 16-year-old Dan Ibrahim became the youngest player to reach a championship for half a century. Sometimes not – Sussex ended four losses by the wooden spoon, her first in 21 years, as summer drew to a close.

The Allan Donald single of the year Jack Blatherwick’s end of the overwhelming moment of insanity that led him to face six balls from Mason Crane that made it out of the dust at Aigburth during Lancashire’s spectacular breakdown / thrilling car chase. He survived three balls before fighting the penultimate slip, allowing No. 11 Matt Parkinson to survive the over. He did and the Dane Vilas took her over the line to make sure the championship was a tie until the last day.

The Eeyore’s Popped Balloon Award for party celebrations: Lancashire, who set up a large room at the Point for the last day of the season, invited members and players to watch the final day in Edgbaston on a big screen and prepare a selection of delicious snacks. Unfortunately Somerset couldn’t hold their innings together and only a thimble full of the most loyal appeared to watch Warwickshire captain Will Rhodes slip Jack Brooks to win the match and claim the title.

The Nasser-Hussain Prize for Reading the Runes Kent looked up at the gloomy sky to the northwest, glanced at the opposing team’s sheet of paper with the name James Anderson on it, and decided to take a club. Anderson quickly cracked his 1,000th first-class wicket on his way to seven-for-19 when Kent was knocked out of the game in one session. 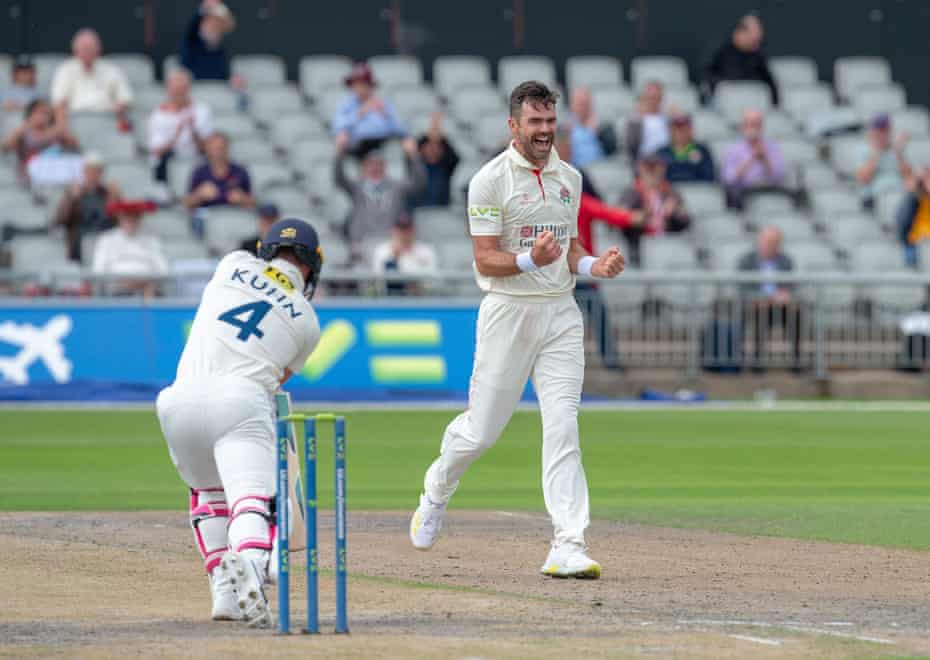 The Ben Stokes Award for miracles Nottinghamshire, cobwebbed after a season of poor performance and failure to win a championship game for nearly three years, caught up with Derbyshire and suddenly rediscovered their mojo and topped group one and third in the final standings.

The fickleness of fate award Haseeb Hameed and James Bracey, whose contrasting fortunes with England after impressive performances in county cricket have shown how cruel the game can be. Bracey finds strength from Hameed’s comeback.

The ECB price for the worst press release of the year Yorkshire, who released a summary of their long-awaited report within an hour of the Old Trafford Test’s cancellation, and their inability to simply apologize to Azeem Rafiq continues to baffle.

the NatWest Trophy for taking your chance if you can Rob Yates of Warwickshire, who had a glorious autumn century behind him in the Bob Willis Trophy finals, in front of Sky cameras and a multitude of influential eyes, just as the selection (likely) prepares for an Ashes tour and a Shadow -A squad to select.

This is an excerpt from the Guardian’s weekly cricket email, The Spin. To subscribe and receive the full version, simply visit this page and follow the instructions.