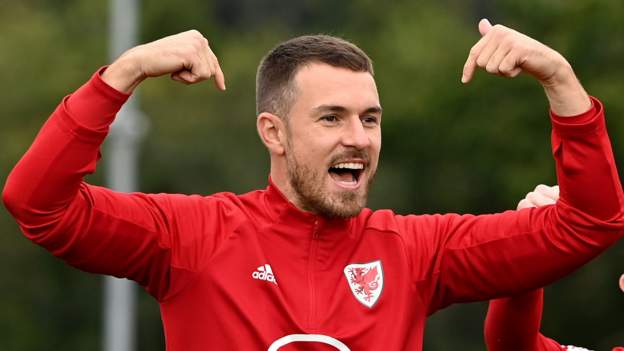 Aaron Ramsey says his international career would feel “complete” if he could help Wales qualify for a first World Cup since 1958.

The play-offs are the most realistic path for Wales to take to the 2022 tournament in Qatar.

Ramsey, who set aside questions about his future at Juventus during his time with Wales, will be his country’s captain in the qualifier against Estonia in Tallinn on Monday.

“To qualify for a World Cup would be an incredible achievement,” he said.

“We were lucky enough to experience two European championships.

“They were absolutely great so hopefully ticking off a World Cup would be a dream.

“It’s a long way, but if we can do that it would be kind of complete, right?”

Ramsey was named to the Uefa team of the tournament when Wales reached the Euro 2016 semi-finals and was one of the leading figures at the European Championship earlier this year.

However, injuries meant the former Arsenal midfielder could only play in 19 of Wales’ 44 games between Euro 2016 and Euro 2020.

Ramsey returned to captain Wales after another absence, scoring his first goal in a thrilling 2-2 draw against the Czech Republic on Friday.

The 30-year-old midfielder did a great job in Prague, playing more minutes in a game than he has for Juventus this season due to various injury problems.

Welsh coach Robert Page said last week he would like to see Ramsey return to regular appearances in the Premier League, home of Arsenal for more than a decade before joining Juve in 2019.

When asked for Page’s comments, Ramsey said, “I’m under contract with Juventus and I have a year and a half under my contract.

“Hopefully I can show exactly what I can there. I’m just concentrating on Monday’s game and hopefully I’ll win there to position ourselves well for World Cup qualification.

“It’s a huge dream for me and the rest of the guys.

“We want to finish second in the group and finish the job we set out to do. It was always difficult to come with Belgium.” [who lead Group E by eight points] to finish first in the group, but our goal has always been to finish in the top two.

“It’s not a friendly, it’s a World Cup qualifier and we prepared like any other game and we hope we can get away with it.”