Oil prices rallied this week on a string of bullish predictions from major investment banks, but may have gone too high too quickly. 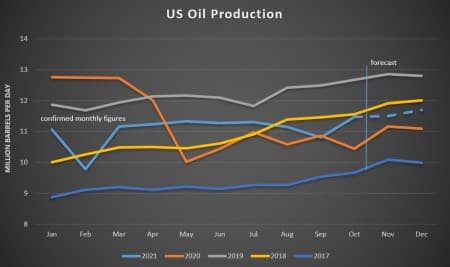 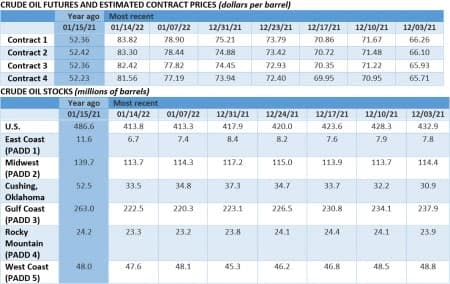 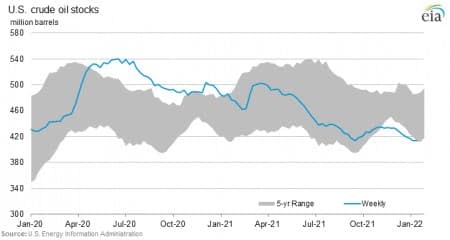 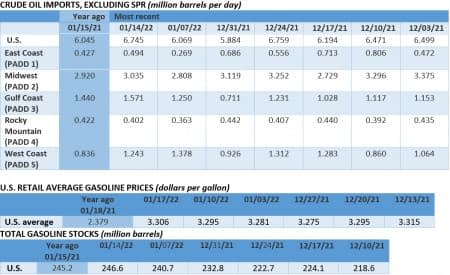 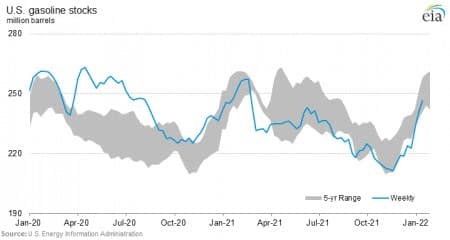 Leading investment banks released their forecasts for 2022 this week, with both Goldman Sachs and Morgan Stanley expecting crude oil prices to hit $100 a barrel this year as oil inventories continue to decline and OPEC+ spare capacity shrinks. Those reports propelled ICE Brent above $90 a barrel for the first time since 2014 this week, but the oil rally fizzled out on Friday as the priced-in geopolitical premium weakened. Despite repeated forecasts of a looming supply shortage, more crude oil is likely to hit the market in the coming weeks – Libya is already back and Ecuador will soon be there too. The broad backwardation in futures markets with Brent M1-M12 spread at $8 a barrel suggests that market fundamentals are pointing to a decline from here rather than a continuation of the rally. As of Friday, global benchmark Brent was trading around $88 a barrel, while WTI was trading at $85 a barrel.

The US Congress is trying Big Oil again. A US Congressional committee invited senior officials from four major oil companies — ExxonMobil, Chevron, Shell and BP — to testify in February on industry’s role in climate change, the next phase of the House Oversight Committee’s investigation into companies blocking fossil fuels from climate change .

Med supply disrupted by Ceyhan pipeline explosion. A falling power pole caused pumping to halt along the Kirkuk-Ceyhan pipeline, which brings Kurdish crude oil to the Mediterranean, although the impact was relatively brief as it took Turkey a day to bring the pipeline back to rated capacity.

Chesapeake is poised to buy Chief Oil & Gas. US oil company Chesapeake Energy (NASDAQ:CHK) is reportedly in advanced talks to buy privately held Chief Oil & Gas for about $2.4 billion, a little less than six months after the former emerged from bankruptcy and began operations refocus on gas production.

Oil companies leave Myanmar. oil majors Total Energies (NYSE:TTE) and Chevron (NYSE:CVX) after last year’s military coup decided to leave Myanmar and pull out of the Yadana offshore gas project off the south-west coast of the country without any financial compensation.

Britain rejects request to build power cable between Britain and France Despite UK electricity prices soaring over the course of 2021, UK Business Secretary Kwasi Kwaryeng rejected a request to build a 16GWh high-voltage undersea cable that would bring power from France.

Still-torn Libya aims to maximize production in 2022. With Libya just days out of the woods after a month-long supply disruption, the head of the country’s NOC, Mustafa Sanallh, claimed Libya is targeting an average annual production level of 1.2 million barrels per day in 2022.

Turkey wants to ration electricity for industry after the Iranian line was stopped. Turkey’s Energy Ministry said it will impose mandatory blackouts on major industrial plants after Iran cut gas supplies to Ankara for up to 10 days due to a technical failure on the Iran-Turkish gas pipeline.

Great Britain does not intervene in the carbon market. While the UK government reserves the right to cool the UK carbon market by adding free allowances as part of its cost-containment mechanism, London has repeatedly opted out, despite UK carbon prices already standing at £78 per mtCO2eq. ($105/mt) and declining margins in the industry.

Calcasieu Pass on the verge of commercial launch. The largest LNG project to come online in the US this year, Venture Global’s Calcasieu Pass, this week more than doubled the amount of gas flowing to the terminal to 88 mcf per day, suggesting the liquefaction plant will soon start production of LNG should start.

By Tom Kool for Oilprice.com

Other top reads from Oilprice.com:

Read this article on OilPrice.com

The Market Is Melting Down and People Are Feeling It. ‘My Stomach…

Robinhood and 4 Other Broken IPO Stocks to Buy