What can Scottish clubs expect in European qualifying competitions? 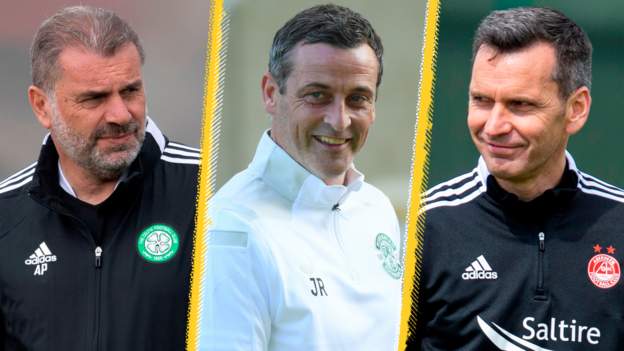 The majority of Scottish senior clubs have already started their domestic league cup season and three more teams are starting their campaigns in Europe this week.

Seven teams from six Scottish clubs will compete in four different competitions in the continental men’s and women’s competition this season. Five of these teams already know their opponents, while the other two will find out theirs on Monday.

But what can you expect? How does it all work? And what are the chances of the lucrative group stage?

On the one hand, the men’s qualifying rounds are returning to two-legged players after last season’s individual games. One major variation, however, is that Uefa has abolished the away goals rule.

Another revolution is the addition of a third competition – the Europa Conference League. While it gives the smaller clubs a chance of a long run, there are still some ominous opponents standing in the way.

Hibernian and Aberdeen start in this competition and St Johnstone, Celtic and Rangers could find themselves there too, depending on when their interests in the Champions and Europa League end.

Another welcome change will be the return of fans, although full houses still seem a long way off.

It has been confirmed that 9,000 will be at Celtic Park to visit Midtjylland and another 5,655 in Pittodrie to greet Hacken, with Hibs still waiting to find out if their application for 9,000 is successful.

For the first time since 2012-13, Scotland has two teams in Europe’s first competition. But Rangers and Celtic are going different ways to join the European elite in the group stage draw on August 26th.

Should they prevail, they should be seeded, but could face heavyweights such as PSV Eindhoven (Netherlands), Genk (Belgium), Spartak Moscow (Russia) or Sparta Prague (Czech Republic). Then they would be unset if they reached the play-offs with teams like Benfica (Portugal) and Shakhtar Donetsk (Ukraine) in the way.

Rangers don’t know their opponents yet, with the third qualifying round draw on Monday. They are seeded, but could play against Cluj (Romania), Ferencvaros (Hungary) or Malmö (Sweden) – all of whom have beaten Celtic in recent years. 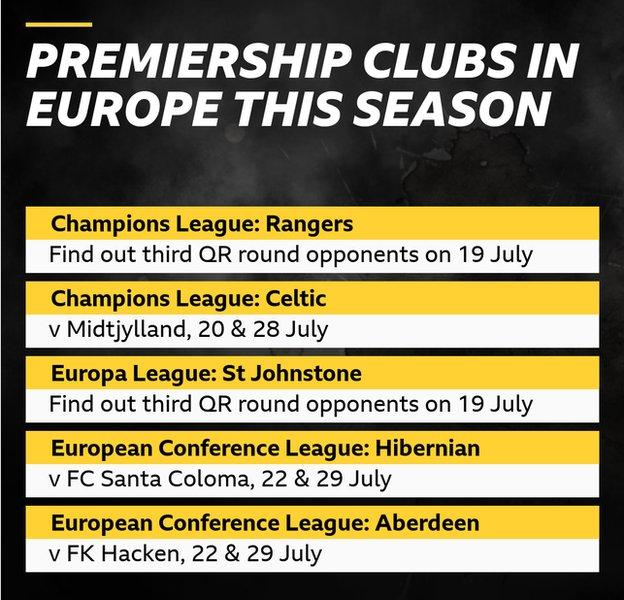 While Rangers and Celtic could fall behind if their Champions League qualifying campaigns don’t go according to plan, St. Johnstone is currently alone for Scotland.

Whatever happens, they will be in a play-off round – should they win their opening game, it will be in the Europa League, lose and the Conference League safety net awaits.

The Perth team will also meet their opponents on July 19th and it will be one of three options; the loser of Rapid Vienna (Austria) against Sparta Prague (Czech Republic); the loser of PSV Eindhoven (Netherlands) against Galatasaray (Turkey); or Midtjylland, should Celtic beat them.

Should Celtic lose, there is no chance of a Premiership draw as clubs from the same nation remain separate.

If St. Johnstone were to thwart the odds and win, one of AZ would be Alkmaar (Netherlands), Fenerbahce (Turkey), Zorya Luhansk (Ukraine), Royal Antwerp (Belgium), Sturm Graz in the play-off round of the Europa League. waiting for them (Austria) or Randers (Denmark).

If you win, you would be in the Europa League groups. Losing and a place in the Conference League group is theirs.

The new competition may be the smaller of the three, but qualifying for the group stage is still a tough task as Hibs and Aberdeen have to go through three rounds to get there.

Both would not be seeded for the next round, where players like Anderlecht (Belgium), Copenhagen (Denmark) and Feyenoord (Netherlands) lie in wait. And even if they get through that, the play-offs at Roma and Tottenham Hotspur will drop.

Everything has changed for women too, with a redesigned competition that introduces a six-game group stage.

In a complicated qualifying process, clubs have to go through a semi-final and a final in a mini-tournament played in one country before playing home and away games in the second qualifying round.

This means that Glasgow City, who host their mini-tournament, will face Birkirkara (Malta) on August 18, before facing either BIIK Kazygurt (Kazakhstan) or Slovan Bratislava (Slovakia) in the final three days later.

Celtic face a much tougher task on their competitive debut as Fran Alonso’s side are on their way to the league. They travel to Norway for their group and open against Spain’s Levante, followed by hosts Rosenborg or the Belarusian runner-up FC Minsk.

The second round will be littered with big names like seven-time winner Lyon (France), two-time winner Wolfsburg (Germany) and other giants like Manchester City and Real Madrid (Spain).