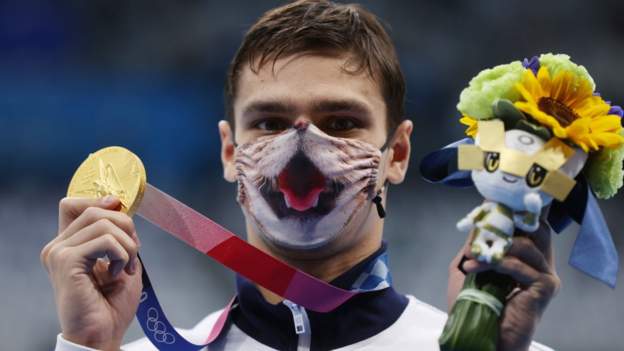 When Russian athletes stand on the podium after their Olympic victory in Tokyo, they hear a Tchaikovsky piano concerto instead of their national anthem.

And some of them hear questions too.

More than 300 athletes from 30 sports compete as the Russian Olympic Committee, not their country, under sanctions for doping scandals.

They are fourth on the medal table with 10 golds and 32 medals, but their success is not well received by some of their competitors who believe that the country’s doping record prevents them from attending the Games.

While Murphy later rowed back on his comments and said he was talking about doping in general, Rylov said the American was entitled to his thoughts given Russia’s doping past.

British swimmer Luke Greenbank, who won bronze in that race, said: “Obviously, it is a very difficult situation not to know if you are up against someone who is clean.

“Of course there is a lot of media around the Russian Federation participating in the Olympics. It is frustrating to see this as an athlete knowing that there is a government-sponsored doping program and more could be done to counter it. “

American rower Megan Kalmoe had said the day before after the medal from Vasilisa Stepanova and Elena Oriabinskaia in pairs that “to see a crew that shouldn’t even be here running away with silver is an uncomfortable feeling”.

Meanwhile, tennis player Daniil Medvedev reacted angrily earlier this week when asked if Russian athletes carry a “stigma of cheaters” at the Olympics.

“It’s the first time in my life that I don’t answer a question and you should be ashamed of yourself – I don’t want to see you again,” the world number two told the reporter.

The Russian Olympic Committee tweeted after Murphy’s statements in the pool that his athletes were “rightly” in Tokyo.

“Whether someone likes it or not”, it added.external link “You have to know how to lose. But not everyone does.

“The old hurdy-gurdy [musical instrument] plays the tune of Russian doping once again. Someone is busy turning the handle. ”

This is the third consecutive Olympic Games in which Russia’s athletes are restricted in their eligibility to participate.

A doping scandal was revealed in 2014 that eventually led to a report in 2016 that found that Russia had run a state-sponsored doping program for the “vast majority” of Olympic summer and winter sports for four years. This also included manipulating tests at the 2014 Winter Games in Sochi, where they landed at the top of the medal table as hosts.

At the 2016 Rio Olympics, Russians competed in a number of sports, but track and field athletes were banned, while at the 2018 Pyeongchang Winter Games, athletes without proof of doping were allowed to compete under the name of Olympic Athlete from Russia.

There will only be 10 athletes representing the Russian Olympic Committee in Tokyo. Athletics World President Sebastian Coe said earlier this week that the country, whose athletics federation continues to be suspended, should be grateful that, given its long history, there is even any “concealment” and little progress on doping.

“The debate at the table was pretty tough,” he said. “There were colleagues of mine who asked if there should be neutral athletes. The task force decided that 10 is a reasonable number and the council approved it.”

There is no Russian flag on the outfits worn by ROC participants in these Olympics, although they are allowed to wear blue, red and white tracksuits as long as they do not bear the word “Russia” or other national emblems.

If they win a medal, a flag with the Olympic rings and three flames will be hoisted during the ceremony.

And if they win gold, the Piano Concerto No. 1 by the Russian composer Pyotr Tchaikovsky will be heard instead of their thundering national anthem.

The raw material feed: The risks of the copper supply are increasing