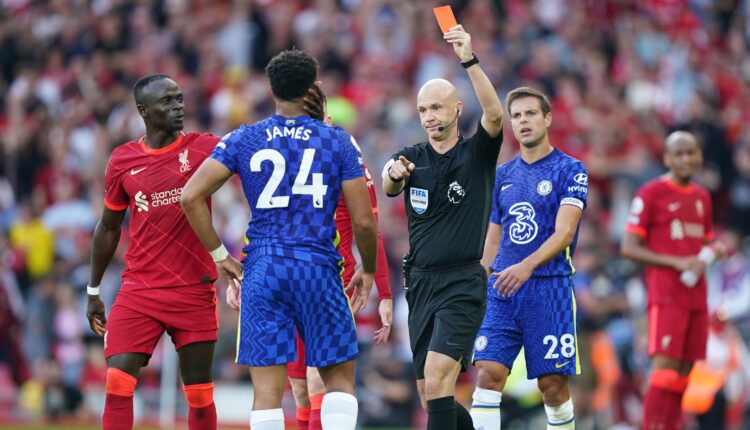 Chelsea offered defensive mastery as Thomas Tuchel’s men dug deep to secure a 1-1 draw at Liverpool after Reece James was sent off during an explosive end to the first half.

Kai Havertz led Chelsea in a captivating opening period that ended dramatically when video assistant referee Anthony Taylor advised them to check the screen on the sidelines.

The referee sent James to handball and Mohamed Salah scored after the resulting penalty, but Liverpool failed to score a winning goal in the second half as Chelsea channeled their anger into excellent defensive positions.

All eyes were on Anfield as the Premier League hopefuls competed against each other on Saturday night after starting the campaign with two top wins each without conceding a goal.

Few could have guessed that the Blues would get away with a seemingly groundbreaking decision at the end of the opening phase.

The atmosphere on Anfield was crackling from the start, although the Liverpool manager will be disappointed that some ignored his request not to sing a homophobic song aimed at Chelsea.

The Reds started on the forefoot and exciting teenage Harvey Elliott tried his luck before Jordan Henderson failed to hit clean with a superb ball from Trent Alexander-Arnold.

Bad decision-making prevented Chelsea on the other hand from creating clear chances, but they made excellent use of the lackluster defense after a set piece.

James swung over a corner from the left and Havertz was only too easy to get a fine looping header past Alisson Becker in the 22nd minute before the head.

Chelsea’s goal came after their first shot on goal and they could easily have made it worse for the hosts.

Virgil van Dijk blocked Romelu Lukaku after N’Golo Kante started a blues hiatus before Mason punched Mount in the face as teammates Havertz and Lukaku yelled to be rehearsed.

Diogo Jota replaced Roberto Firmino before an entertaining first half ended in chaos.

A corner by returning Andy Robertson caused chaos when Joel Matip saw a header off the crossbar before James blocked Mane and Jota attempts on the line.

Liverpool players and fans alike yelled for handball when the Chelsea full-back blocked Mane’s attempt and Taylor was instructed by the VAR to investigate the incident.

The referee pointed to the point and sent James off after going to the field monitor, infuriating the Chelsea players.

Salah kept a cool head despite the storm and shot the penalty home, with the mood fraying again after the equalizer.

Chelsea continued to make their complaints known as the players took a break from which Havertz and a seemingly injured edge didn’t return when Silva and Mateo Kovacic were introduced to back things up.

It was a smart move as Liverpool reappeared with the bite between their teeth.

Jota threw a header over the outside of his shoe after a great cross from Salah before Edouard Mendy stopped a 30-yard shot from Van Dijk.

Henderson leaned agonizingly far from the distance and Mendy slid a low shot from Fabinho past the post, with Chelsea’s goalkeeper also preventing a Robertson snap from the resulting corner.

It was one-sided traffic but Chelsea managed to finally provide Lukaku with offensive support in the 64th minute, with Matip blocking the striker’s shot at the end of a good move.

Most of the visitors’ energy flowed into the back, where the clever Silva skilfully maneuvered the back line.

Salah missed a shot that dribbled right into Mendy’s grip and Alexander-Arnold stabbed the Senegalese international towards the end of the game while Kovacic had a half chance at the other end.

Jota walked over as Liverpool pressed to the death but there should be no winner.