Sweet gets number 16 at Skagit 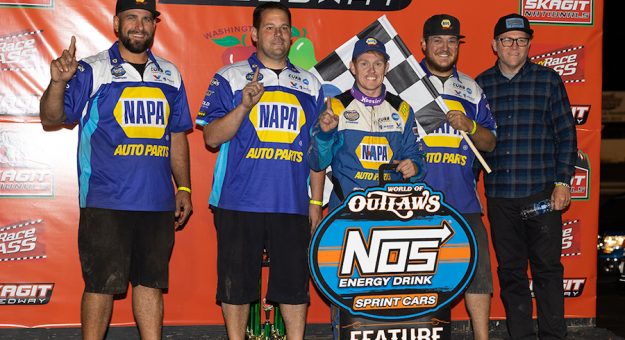 Brad Sweet and the Kasey Kahne Racing with Mike Curb Crew on the winning track. (Photo by Trent Gower)

Sweet made his first start on the three-ten-mile route in 2010 but never won there until he led the 30-lap main event on Saturday’s second night of the Sage Fruit Skagit Nationals.

Sweet started third on lap 30, slipped past Donny Schatz on lap 12, finished second, and then drove right past David Gravel on lap 22 to take the lead.

The most disturbing news for the field in the 16th win of the year in the World of Outlaws NOS Energy Drink Sprint Car Series is his mention that the team, including Eric Prutzman, Joe Mooney and Andrew Bowman, “found something they liked over the course of the year was missing ”. last weeks.”

The Skagit score on Saturday, which marked victories with The Greatest Show on Dirt on 42 different routes, brought Sweet to 74 career victories.

“I’ve always enjoyed coming to Skagit,” said Sweet. “We have a great crowd and a great track this weekend. We were always close here, but seemed to finish second or third and in the end just missed that little bit extra. But I think we found something tonight. I was able to move around and get through the traffic and that’s what wins and loses these races. I felt like I could do things with this setup that I haven’t been able to do for weeks. “

Only stopped by a warning on lap 8, lap 30 on Saturday was full of dense, narrow and unsettling lap traffic. After securing a ninth pole position as the series’ best ninth pole position, Gravel drove away at halftime with a 2.194 second lead, but then the traffic became difficult.

After clearing Schatz for second place, he quickly caught gravel and put pressure on while No. 2 struggled to make movements on the back markers.

The winning move came on lap 22 when Sweet swept the bottom of turns one and two and rolled straight off Gravel, who was pinned on the high side. The number 49 machine checked out immediately and ran to victory for the last eight laps, but it got wild for second place as Gravel, Schatz, McFadden and Haudenschild went wheel to wheel through the traffic.

In the end, Sweet took the checkered flag with a lead of 2.336 seconds.

“Sometimes it’s easier to finish second on a track like this,” noted Sweet. “It’s so much fun racing with guys like David, Donny and everyone who’s on tour right now. This is the toughest thing the World of Outlaws has ever seen. Hopefully we can come back tomorrow and get us $ 25,000. “

Schatz fought his way back from fourth place and finished second in the 30-lap lap on Saturday.

“That was a high-speed chess game,” said Schatz. “The car feels solid, so I think we should be good for tomorrow’s big show.”

After leading the first 21 laps, Gravel slipped back to third for the third race in a row.

“It’s a shame to pull one with zero wins on consecutive nights,” admitted Gravel. “We got better today so hopefully we’ll find a little more tomorrow with $ 25,000 at stake.”

McFadden and Sheldon Haudenschild rounded out the top 5.

To see the full results, go to the next page.