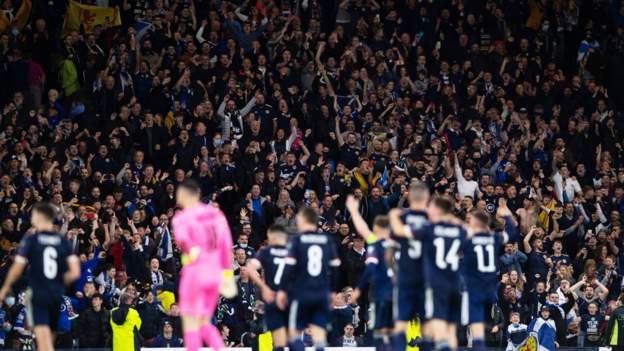 With the tall man in the house, it might seem appropriate to resume Sir Alex Ferguson’s old line after Manchester United won the 1999 Champions League final.

‘Bloody Hell’ wouldn’t quite cover it, however. Not after that Hampden epic. The release of pent-up Scottish being when Scott McTominay scored the winner was great to watch. It was too much even for Steve Clarke.

The Scottish manager can seem like the type of character who smiles first thing every morning just to get it over with, but by the time it got 3-2 he was as dizzy as the most vertiginous in Hampden.

The dry routine (he actually has a deliciously dry sense of humor, but doesn’t necessarily want it to be advertised) went out the window as he galloped across the sidelines in a moment of sheer euphoria. If Clarke loses track of himself (if only for a moment) then you know something special happened on Saturday night.

Scotland get up from the screen

Before that last breath drama, all of this had a sense of fatalism. At 2-2, with the clock an unstoppable enemy, there were flashbacks. There is a law of gravity, only for football, that is of particular importance to the Scottish team. Home and away wins against France only for this campaign, which hit the mark against Georgia.

Leigh Griffiths’ two miracle free kicks to set up England win, only for Harry Kane, who ended up ruining everything. Every long-pants Scotland fan knows the deal. There are a lot of sob stories.

So what went abroad against Austria has to come up against Israel at home. It’s the kind of football physics that ages Scotland fans past their years. And so it looked with little time. Only this time there was the ‘Eureka!’ Endgame moment, a glorious change in the script.

To borrow pictures from the fighting game following Tyson Fury’s win over Deontay Wilder, Scotland were on screen so many times on Saturday that this is a tribute to their resilience they won.

They were on the ground after Jack Hendry’s hasty challenge gave Eran Zahavi the opportunity to score a miraculous opening goal. They were back on the ground when McTominay missed a free kick unnecessarily and his defense for once missed the subsequent handover. It was 2: 1.

Scotland was everywhere. No accuracy in their passage, no serenity, no organization in a chain of three that looked terrified. They had a huge home crowd with them, but a nightmare unfolded.

At the bottom of the screen, they walked again just before the break when Lyndon Dykes missed a penalty. What was it about Dykes’ penalty shoot-out that got Ofir Marciano to assert himself and make an easy save as the striker tried to drill it into the center?

Or the two he put in the middle for Livingston against Motherwell and Hibs last August? He scored every one of them, but there would always be a time when someone called their bluff and Marciano was the man to do it.

After a 2-1 deficit, a missed penalty in the locker and a million mistakes all over the field, this was not the evening everyone had signed up for. This was to be part of one of a three-game winning sequence that would bring Scotland into the refined air of a place in the play-offs for the World Cup with one game to go.

This was supposed to be a continuation of Scotland’s renewed confidence after that grandiose win in Vienna, a game that not only brought fans back to the first full house in Hampden in four years, but should also ensure that they would see enough good things, To bring them all back next time and the time after.

Being behind at halftime wasn’t exactly too short, but that’s when the drama really started. Why it took Scotland 45 minutes to start the engine and get going is a question Clarke wants an answer to, but there was much to be admired as they pulled themselves back into battle.

During the night they had to overcome not only Israel but also their own shortcomings. The fact that they dug it up and won it was proof of their heart more than anything. Even after the dubious Dykes – unimpressed by a penalty shootout – scored the equalizer early in the new half, there were more blows to cope with. 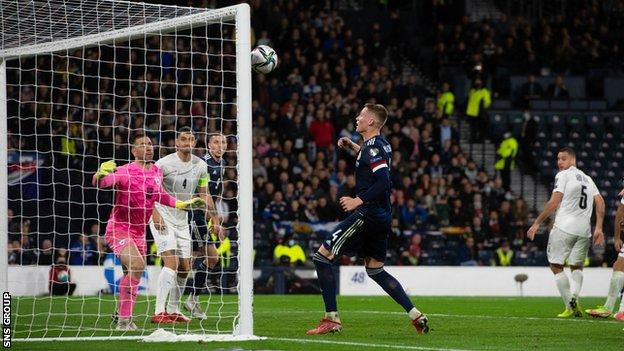 They were almost back in a matter of minutes. It was nearing the hour mark when Zahavi headed straight for Craig Gordon in all the space he could have wished for. It was a colossal moment and a gigantic miss from a player who is usually as forgiving as the Grim Reaper.

Seven goals in seven games in Group F, 26 goals in his last 28 games for his country – in the last three years in international football, only Cristiano Ronaldo has scored with a crazier consistency than Zahavi.

But now he’s missed a sitter and he has a completely confused look on his face, as if he couldn’t quite believe what just happened to him. And maybe this uncertainty spread because from then on Israel only existed as a team on a rope, desperately soaking up the pressure of Scotland and hoping for a draw all the time.

Shortly after the lesson, Dykes missed a big opportunity. A minute before normal time ran out, John McGinn missed another. We started thinking about what this would all mean for the table, and part of that was renaming the last group game against Denmark from one that wouldn’t have mattered if Scotland had won the previous three to one, which could mean quite a lot if they failed in the here and now against Israel.

“Hampden roar is still ringing in the ears”

That was a sobering thought. The rain fell and the last minutes passed and one braced oneself for the deflation, for the all too familiar flatness to the descent.

But there is Dykes, the defender chasing and taking a corner, like a guy who banned his missed penalty to the outer corners of his mind and spurned his sitter. There is McGinn’s excellent delivery just minutes after missing a spectacular opportunity to save us all of this agony.

The truth, however, is that it was as perfect as it was. The noise was loud. The ground under your feet was literally shaking with all the fans jumping around. They were immense, all 50,000. Young and old came together in a blissful pandemonium.

The Faroe Islands are gone on Tuesday. Quieter and hopefully easier in the ticker. Clarke might be tempted to switch teams, partly to put in a squad he has great confidence in and partly to rest some of the players who have to lie down properly on Saturday night.

That was exhausting. And incredible fun on top of that. The Hampden Roar has returned – and it’s still ringing in your ears.