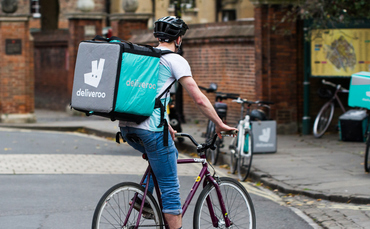 In the five months since it went public (IPO), the London-based delivery company is up nearly 40%, bringing the stock back to its original price debut.

That IPO was described as “one of the most embarrassing public debuts in living memory” by Lee Wild, Head of Equity Strategy at Interactive Investor, as the company closed its first day 26% lower than it opened at 287.45 pence per share 390 pence per share.

Deliveroo’s IPO was also one of the most controversial in recent years, as asset managers lined up to voice the condemnation of the company.

M&G, Aberdeen Standard Investments (now abrdn) and Aviva Investors were among those who avoided going public.

Legal & General Investment Management went further and requested the Financial Conduct Authority not to include Deliveroo in the premium indices so that it would not be forced to invest in the company through its passive products.

Despite the approval of Chancellor Rishi Sunak and Deliveroo’s insistence, these comments would not harm the IPO, the listing flopped.

At the time of his debut, Sophie Lund-Yates, senior equity analyst at Hargreaves Lansdown, agreed with broad concerns about the fund’s social and governance issues to explain poor performance along with “general market volatility”.

She also highlighted that while the pandemic offered a “structural growth opportunity”, investors had to wonder if lockdowns meant “things are as good for a take-away service as they ever will be”.

“Deliveroo’s recovery has always depended on how well people’s desire for takeaway held up as life returned to normal,” she recently told Investment Week.

“We saw that demand remained strong, and that’s probably because more customers got used to the take-out habit.

“It’s also likely due to ongoing concerns about new varieties of the virus, which means some people are avoiding busy restaurants. This is where Deliveroo’s USP really comes into play. It focuses much more on restaurant quality food than “traditional take-away.”

Wild also cited the height of the pandemic’s food shipments at the time of the IPO, voicing concerns that even with “the biggest tailwind it can hope for, the company might not make a profit.”

Since then, he has argued that there is “a stronger sense that Deliveroo is not just a lockdown winner, but a company with a long-term future”.

“The better than expected growth and other strong metrics revealed in the first half results are certainly reassuring,” he said.

“However, with Deliveroo already warning that lower average order values ​​will impact margins, skeptics must be convinced that positive trends can continue when companies return to normal after the pandemic.”

Ketan Patel, fund manager of the EdenTree Sustainable and Responsible UK Equity Fund, is still not convinced of Deliveroo’s investment proposal, which he described five months ago as the “antithesis of a sustainable business model”.

Now Patel has still not changed his mind: “The investment thesis for Deliveroo remains weak despite the recovery in the share price after a bad IPO.

“The business model remains unprofitable and the path to profitability remains highly uncertain, as the company forecast is in the red until the mid-2020s.

“Deliveroo monetization focuses on monthly active consumers, their order frequency and average value per order, all three of which are likely to come under pressure as the pandemic lockdown wears off and consumers return to normal consumption patterns.”

The clamor about Deliveroo’s ESG errors has lessened since its public listing, which was overshadowed by a report from the Bureau of Investigative Journalism and the Independent Workers’ Union of Great Britain that found the company often offered its drivers less than the minimum wage paid, sometimes as low as € 2 an hour.

Patel cited this as part of the explanation for the share price rebound: “The positive noises about driver regulation combined with the support from Delivery Hero, which has taken a 5% stake, has given a tailwind – as has the 13% stake from Amazon. “

Lund-Yates agreed that the recent judgments “addressed concerns about driver welfare” but is still concerned about the company’s ESG credentials.

“These issues are still hovering over the head of Deliveroo. Further questions or reprisals cannot be ruled out in the future.”

Paralympics in Tokyo: David Weir urges authorities to do more for parasport